Mayor Richard West said there were 70 people who signed up to speak, which took about five hours.

There were hundreds of people outside City Hall, many of whom were wearing orange stickers that read “Guns Save Lives." You could hear the crowds cheering from outside when the speakers addressed them from inside the building.

Officials believe there were about 1,200 people who turned out to the event. They think they were 400 inside the building and 600 outside.

There was also a large projector used outside to show what was happening inside.

Chesapeake city council meeting being shown on a screen outside of the building https://t.co/VZo1UK5ru4 @WTKR3 pic.twitter.com/vOsaHUNYe9

One of the attendees was 15-year-old Kaitlynn Flint, a high school student who says she believes in the Second Amendment.

"It's your right to have... to protect and defend yourself, and I feel it's very scary if somebody tries to take that away from you," Kaitlynn said.

She and her father, William, were part of the large crowd watching the meeting on the projector outside City Hall. William said he thought it would be educational for his daughter.

While many attendees want Chesapeake to be a sanctuary city, others are opposed and want stricter gun laws. One father said he opposes the resolution and fears for the safety of his children, while another teen voiced his concerns over gun violence.

However, leaders with the Virginia Citizens Defense League disagree.

"I don't care what color, creed, background, who you call God or who you decide to sleep with at night - gun rights are your rights, and you should have any gun you want to be able to defend yourself and it shouldn't be limited by the government to decide," said Brendan Mooney with the Virginia Citizens Defense League. "We really need them to uphold the Constitution. We understand these sanctuary cities, they don't have a lot of teeth, but it's part of a bigger movement, and that's really what we're trying to get forward - is that bigger movement."

After hearing from the speakers, the council voted unanimously to approve an amended resolution to make Chesapeake a Second Amendment "constitutional" city. They received a standing ovation after they passed the resolution.

As for using the word "constitutional" instead of "sanctuary," council members said they were advised doing so could jeopardize city funding and impact city taxes. They also said they are concerned about all constitutional rights of all citizens. 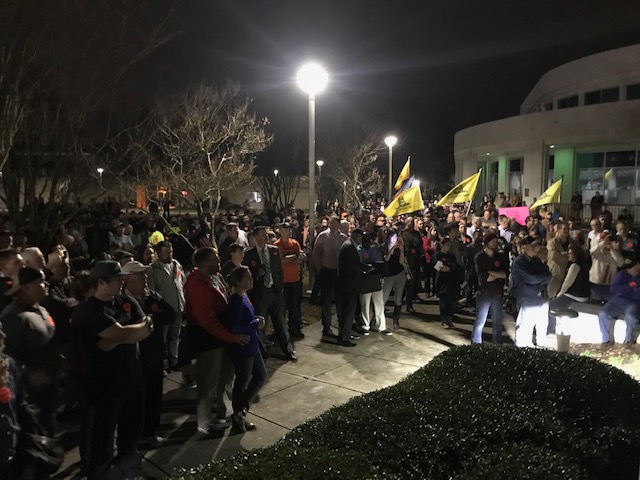