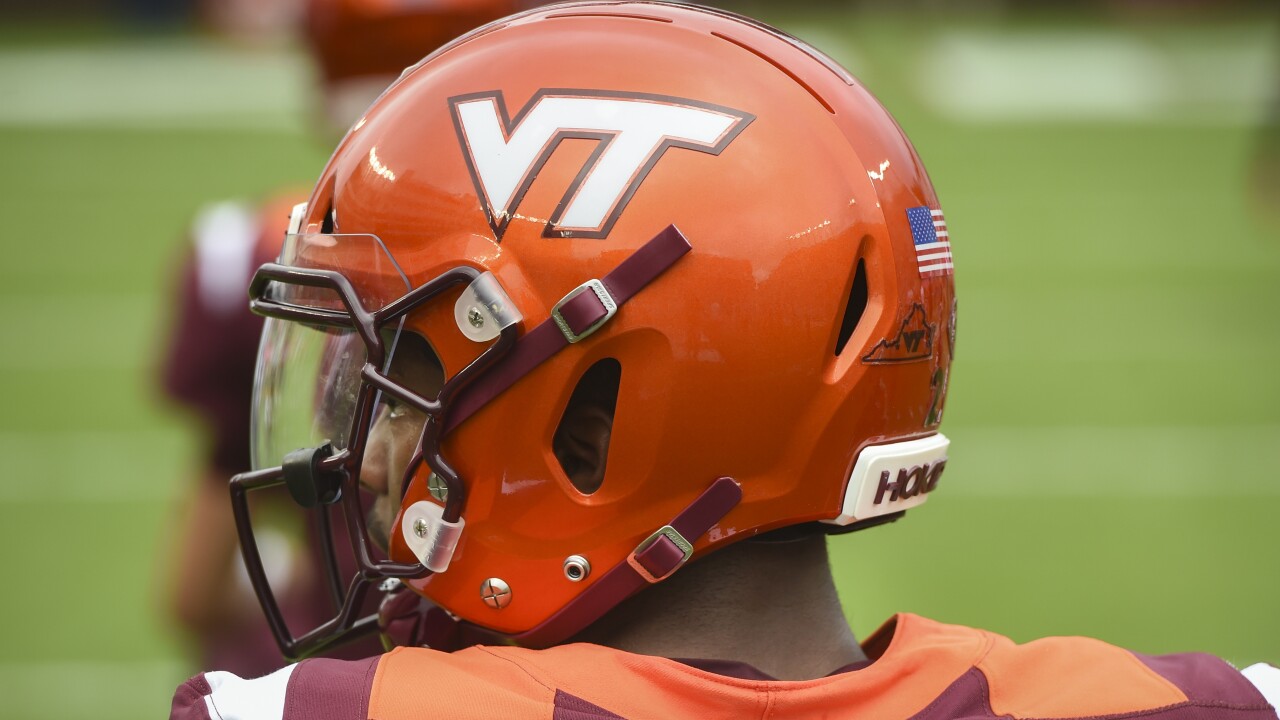 BLACKSBURG, VA – SEPTEMBER 14: A detailed view of the Orange Effect helmet worn by quarterback Hendon Hooker #2 of the Virginia Tech Hokies prior to the game against the Furman Paladins at Lane Stadium on September 14, 2019 in Blacksburg, Virginia. (Photo by Michael Shroyer/Getty Images)

Two of the running backs inked by Tech have experience at the collegiate level. RB Khalil Herbert is a graduate transfer from the University of Kansas, where he played in 35 games, registering 320 carries for 1,735 yards (5.4 avg.) with 14 touchdowns. He also caught 24 passes for 118 yards. The Ft. Lauderdale, Florida, native registered three career 100-yard rushing games for the Jayhawks, including a career-high 291-yard effort vs. West Virginia (9/23/17) and a 187-yard performance in a 48-24 win at Boston College (9/13/19). RB Marco Lee comes to Blacksburg from Coffeyville Community College, where he racked up 236 carries for 616 yards (5.2 avg.) with nine TDs over the past two seasons. Lee prepped at Hardaway High School in Columbus, Georgia.

Florida and Georgia were the Hokies’ most represented states with three signees apiece from those states. Maryland and Texas both contributed a pair of signees, while Virginia, Tennessee, Connecticut and Pennsylvania each contributed one prep signee apiece. DB Lakeem Rudolph of Green Run High School in Virginia Beach continued the Hokies’ longstanding pipeline of talent coming from the 757 to Virginia Tech.

“We were very selective and targeted with this class from the start knowing the number of scholarships we had available,” Fuente said. “I’m very enthused that we were able to land a number of guys who had been on our radar for some time. Some of these players will have an opportunity help us immediately and others will give us depth at positions where we need to continue to develop and grow.

“It’s an exciting time at Virginia Tech and I’m glad this class of signees is going to be part of what still lies ahead for our program,” Fuente continued. “Whether it’s a new on-campus residence hall, our student-athlete performance center or the renovations to our strength and conditioning center, as well as our meeting space, our facilities are definitely undergoing a transformation. Just as importantly, our team continues to develop with a group of players who are committed to working hard, excelling in the classroom and doing whatever it takes for us to continue improving individually and collectively.

“I can’t wait to get everyone on campus to begin the next step in their academic and athletic careers,” Fuente concluded. “I know Coach Hilgart and his team are anxious to help these young men continue to develop the mental and physical toughness it takes to compete at this level. Congratulations to this group and everyone in their lives who has helped them get to this point. We will do our very best to help each and every one of them reach their full potential at Virginia Tech.”

The traditional National Signing Day will be on Thursday, Feb. 20, 2020.

Wilfried Pene
Tight End                                 6’3″      240 lbs.
Home Country – France             St. Thomas More Prep
Talented tight end and wrestler joins current Tech P Oscar Bradburn (Sydney, Australia) as the only other foreign-born player on the Hokies’ roster … According to Tech’s coaching staff, Pene developed a passion for football in his native France and subsequently enrolled at St. Thomas More Prep in Oakdale, Connecticut, where he played for head coach Jason Manson … A two-time All-New England selection was part of an offensive unit that helped guide the Chancellors to a 7-1 record in 2019 … Played both tight end and defensive end, catching eight passes for 183 yards with four TDs on offense, while racking up 47 tackles, 15.5 sacks, 11.0 TFL and three forced fumbles … Also blocked a punt … Worked with head coach Ryan Roddy on the wrestling squad and finished seventh in New England in his first season competing in that sport … Last name pronounced (PEN-aye).