Christmas amid the climate crisis: An artist’s scorched tree symbolizes pain and resilience in a fire-stricken Australia 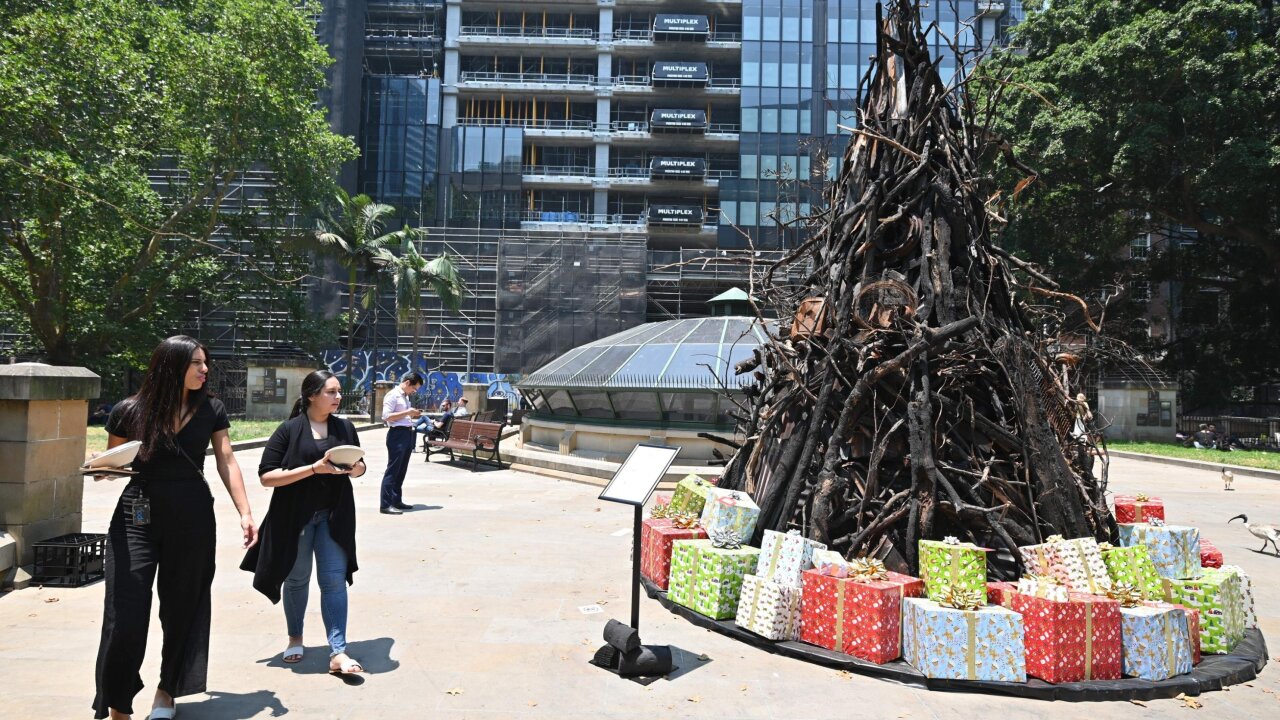 An installation of a charred Christmas tree on display in Wynward Park, downtown Sydney, created by artist James Dive. The tree is constructed out of charred logs and burnt household items gathered from the aftermath of bush fires that have scorched the region.

Christmas has taken a dark turn for many Australians as the country faces its hottest days on record this holiday season. As fires rage across New South Wales, a local artist has installed a Christmas tree display in downtown Sydney, the state’s capital.

Unlike the lush greenery and sparkling lights normally characteristic of the holiday centerpiece, the tree was constructed with charred timbers and decorated with burnt household remains from the fires — a symbolic reminder of what Australians are up against as the climate crisis escalates.

“I think the best way to describe it is sad,” James Dive, the artist, told CNN. Dive gathered the materials for the project himself, combing through the widespread destruction left behind from the most recent bush fires in his home state.

“The entire day, I didn’t hear one bird. Every animal has left. Birds left long before the bush fires. And I hate to think what happened to the other animals,” he said.

The everyday household items bedecking the tree, including an alarm clock, a gate fence, and a bicycle wheel that sits in place of the star, are meant to evoke a sense of community and draw attention to the human costs of the fires, according to a news release from the Red Cross, who partnered with Dive and the City of Sydney to make the project happen.

Brightly wrapped gifts sit in stark contrast at the base of the charred tree, hanging on to a bit of the Christmas spirit despite the devastation. Dive said even after experiencing the destruction first hand, he walked away with a bit of hope.

“I think Australians, that’s one thing we’re good at is picking ourselves up again. To me what was heartening, when I went out to gather these items from burned communities, was that our bush is designed to be burned … You can see the seeds and regeneration but the one thing that’s hard to get back on its feet is the community,” Dive told CNN.

Over 700 homes have been destroyed and at least 4 people have been killed in the fires that have ravaged Dive’s community for over two months. Lifting up those who have lost so much was the driving force of the project — the presents at the base of the tree have tap-and-go EFTPOS tags on them, so passersby can make donations to victims of the fire.

The Mayor of Sydney, Clover Moore, posted a photo of the tree on her twitter feed, saying “It symbolizes the devastation of the fires, and the resilience of the affected communities.”

Australia experienced its hottest day on record per national average on Tuesday, and the heatwave is showing no signs of abating.

Temperatures averaged a sweltering 40.9 degrees Celsius (105.6 Fahrenheit) across the country on Tuesday, according to the Australian Bureau of Meteorology. The bureau warned that temperatures are expected to climb as the heatwave spreads to the east of the country, leading to several days of “exceptional heat.”

New South Wales is experiencing the “longest and most widespread” period of air pollution on record as heavy smoke from bush fires surrounding Sydney will result in poor air quality for the city until Saturday, according to CNN affiliate Seven Network.

Bush fires have engulfed the region for over two months now. Ninety-seven fires remain active across the state, over half of which are not contained, as of Thursday morning local time, according to the state’s Rural Fire Service. A state of emergency has been declared in New South Wales for the second time in the past two months.

Australia is only entering into its summer season. Normally, temperatures peak in January and February, meaning the country could be months away from finding relief.