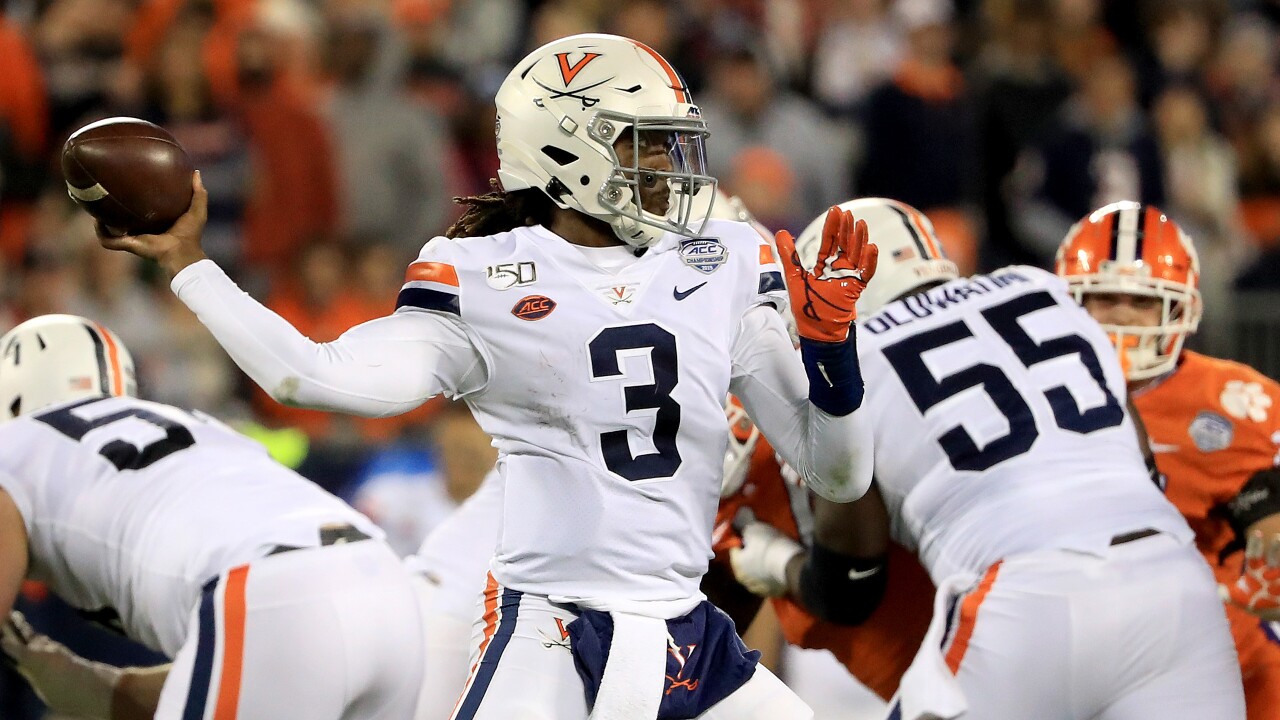 CHARLOTTE, NORTH CAROLINA – DECEMBER 07: Bryce Perkins #3 of the Virginia Cavaliers drops back to pass against the Clemson Tigers during the ACC Football Championship game at Bank of America Stadium on December 07, 2019 in Charlotte, North Carolina. (Photo by Streeter Lecka/Getty Images)

CHARLOTTESVILLE, VA – NOVEMBER 09: Bryce Perkins #3 of the Virginia Cavaliers throws a pass in the first half during a game against the Georgia Tech Yellow Jackets. (Photo by Ryan M. Kelly/Getty Images)

FORT LAUDERDALE, Fla. – In just two years as the University of Virginia’s starting quarterback, Bryce Perkins has played a pivotal role in turning the program around and has broken records along the way.

The dual-threat quarterback’s 745 rushing yards puts him well ahead of the team’s leading running back, Wayne Taulapapa, who has 459 yards. Perkins has scored 11 times on the ground.

Perkins, who has 3,215 yards through the air and 18 touchdowns, is infectious when he’s playing well.

Perkins holds the school record for most rushing yards by a quarterback (1,668). He’s rushed for at least 100 yards and thrown for at least 200 in the same game on four occasions, something that’s only been done once before his arrival.

“Coming here I wanted to break records, I wanted to win, I wanted this team to be one of the teams that are talked about, and I think that’s exactly what we’ve done,” quarterback Bryce Perkins said. “Everybody’s talking about why are we here? You guys are gonna lose, UVA, UVA, UVA.

“Man, it’s gonna be great when we go out there and shock the world.”

To shock the doubters would also mean accomplishing something that’s only been done once before (1989) in the history fo the program: a 10-win season.

The No. 24 Cavaliers face the No. 9 Gators in an 8 p.m. matchup Monday at Hard Rock Stadium.