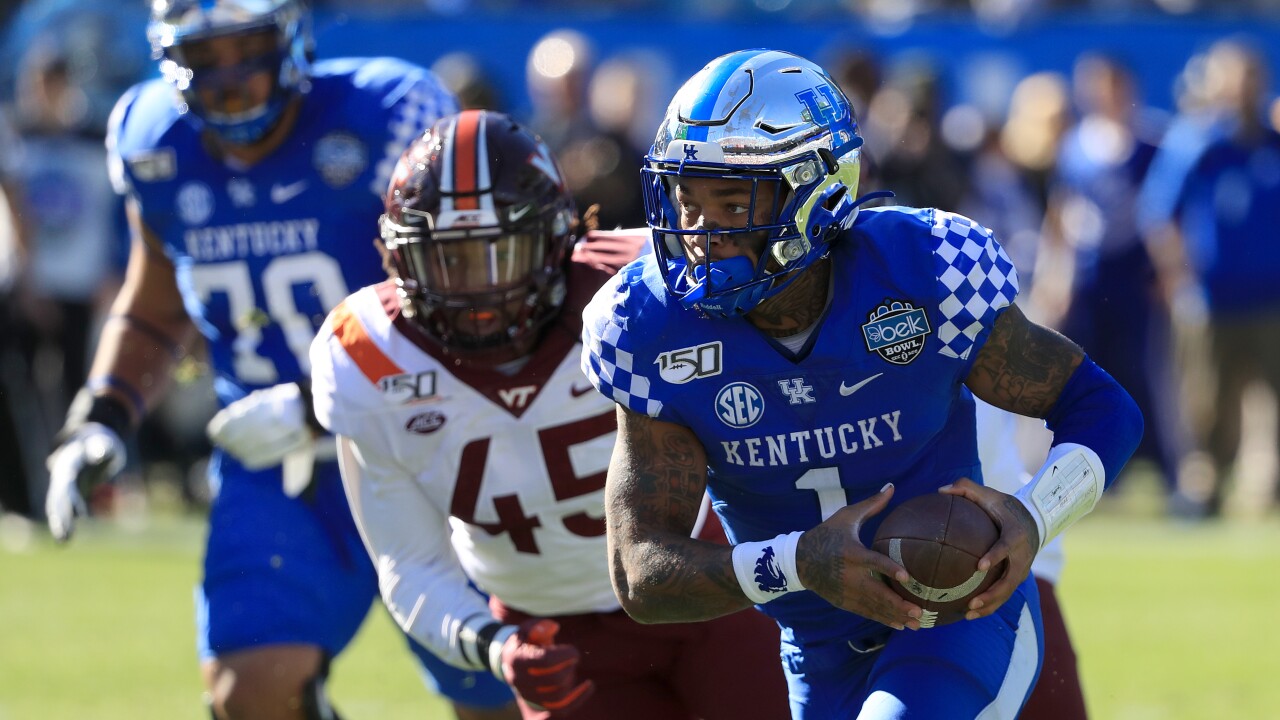 Then he closed them out with his arm.

”Ya’ll said I couldn’t throw, so over the top it goes,” Bowden joked after the game.

Bowden ran for 233 yards on 34 carries, and then tossed a 13-yard touchdown pass to Josh Ali with 15 seconds left as Kentucky rallied behind its remarkable receiver-turned-quarterback to beat Virginia Tech 37-30 on Tuesday in the Belk Bowl.

Bowden ran for two touchdowns before leading an 18-play, 85-yard game-winning drive that took more than eight minutes off the clock. It ended with Ali getting open down the middle of the end zone.

Bowden, who took over as Kentucky’s quarterback after five games because of injuries, passed for 73 yards on 12 attempts. His rushing day was the biggest in a bowl game since Texas A&M’s Johnny Manziel ran for 219 yards vs. Oklahoma in 2013.

Bowden said he never would have believed his final play as a college player would be a touchdown pass to win a bowl game. But a pregame scuffle with Virginia Tech players – in which TV footage showed Bowden apparently throwing a punch – could have written a very different story for the dynamic quarterback.

For two programs that hadn’t met since 1987 – long before anyone on either roster was born – this one got testy before kickoff. Tussles broke out between players during pregame warmups, but officials didn’t levy penalties or warnings for the actions.

”It’s a lot of emotion,” Bowden said. ”I could have hurt my team and not been out there (today) with them, so I apologized to my program, my teammates. . We respect Virginia Tech, and if I could go back, I wouldn’t do it. But it’s in the past.”

Wildcats coach Mark Stoops said if Bowden had been the starting quarterback since the beginning of the season he would have been a Heisman Trophy candidate.

”This guy right here is one of the best players in the country,” Stoops said of Bowden, the Paul Hornung Award winner for the nation’s most versatile player. ”He showed that. He and I have been talking for years about him playing defensive back. He’s been ready to go in there.”

Hendon Hooker threw for 110 yards and two touchdowns and Deshawn McClease ran for 126 yards and a score to lead the Hokies (8-5).

Bowden, the game’s MVP, carried 13 times on the winning drive, converting a fourth down along the way to take a 31-30 lead. The Wildcats (8-5) added a final touchdown as time expired when Jordan Wright returned a failed lateral attempt by the Hokies 28 yards for a score.

”He’s dynamic with the ball in his hands but throwing the ball, that should have been to our advantage when all was said and done,” said Virginia Tech’s long-time defensive coordinator Bud Foster, who ended his coaching career with a loss.

With both Western Kentucky and Louisville winning their bowl games, the state of Kentucky improved to 3-0 on the season.

Virginia Tech: The Hokies lose only five senior starters, all on defense. Their offensive line is all freshman and sophomores, a good sign for continuity. Hooker is a junior.

Kentucky: The Wildcats will have to replace Bowden, the team’s third starting quarterback this season. Bowden also finished as the team’s leading receiver, despite playing quarterback for the final eight games.

Brian Johnson’s career-best 54-yard field goal took a while getting there. On Virginia Tech’s opening drive, Johnson connected on a kick that had plenty of hang time – and cleared the crossbar by no more than 2 yards.

Wildcats safety Zach Johnson closed the first quarter with a massive hit on punt returner Hezekiah Grimsley, meeting him a split second after the Grimsley fielded the kick. Johnson jumped up and made an archer’s gesture toward Kentucky fans in the end zone.

Hokies coach Justin Fuente was asked to sum up the legacy of Foster, who is retiring after 32 seasons.

”I wish I was eloquent enough,” Fuente said. ”He’s a Hall of Fame football coach, and not because he knows when to blitz. It’s because he knows how to handle people and he’s passionate about his work.”