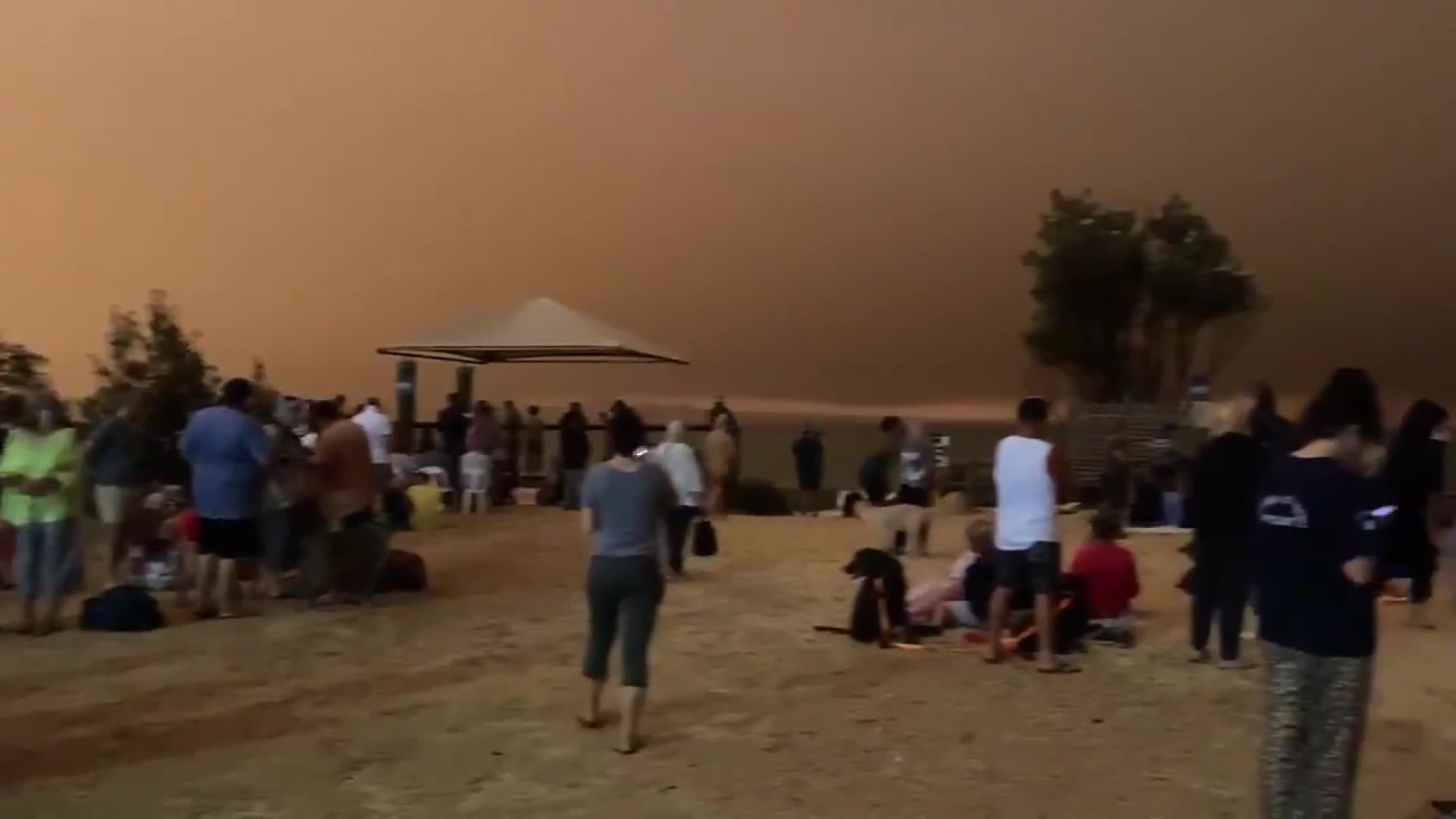 Australians are facing a terrifying start to the new year, as bushfires rip through popular tourist spots on the country’s southeast coast, forcing thousands of people to take refuge on nearby beaches.

Idyllic coastal towns packed with tourists planning to ring in 2020 were cast in apocalyptic red on Tuesday, as smoke blotted out the sun.

In the town of Mallacoota, which lies on the easternmost edge of the state of Victoria and is a well-known family camping spot, around 4,000 people fled to beaches, authorities said.

“There’s no way in or out,” Mallacoota resident Jason Selmes told CNN after evacuating his home.

Another tourist, Ida Dempsey and her family from Melbourne, fled to their boat which was moored about 200 meters (656 feet) from the shore.

Dozens of fires continue to burn out of control in the states of Victoria and New South Wales (NSW). Thousands more people were forced to evacuate their homes along the NSW coast on Tuesday, which is dotted with small beach towns popular with holiday-makers over the Christmas season.

In Batemans Bay, NSW, hundreds of families fled their homes Tuesday under an eerie orange sky. “It was like we were in hell,” vacationer Zoe Simmons told CNN. “We were all covered in ash.”

Meanwhile, across Victoria, over 200,000 hectares have already been burnt in the fires, according to the state’s Emergency Management Commissioner, Andrew Crisp. He warned: “It is still a dynamic and dangerous situation.”

There is, however, a glimmer of hope. Weather conditions are expected to improve in the next 24 hours — meaning cooler temperatures and lower winds — but will worsen again by the end of the week, bringing dangerous fire conditions, according to CNN meteorologists.

By Tuesday evening, some people were even returning to their homes, according to Victoria’s Country Fire Authority Chief, Steve Warrington, though he added that “a number of houses” in are believed to be destroyed or damaged.

Victoria Emergency Management Commissioner Andrew Crisp said some communities in the state remain isolated, and food packs and other supplies are being organized for transport. Emergency crews are still working to determine the extent of damage by air, but suggest significant property loss across the East Gippsland region, he said.

Father and son among dead

The death toll continues to creep up from the fires, including a father and son in the NSW town of Cobargo on Tuesday. Four more people are unaccounted for in Victoria.

A volunteer firefighter who died on Monday, while working in the Green Valley, was named on Tuesday as 28-year-old Samuel McPaul. He leaves behind his wife, who is pregnant with their first child, after the truck he was in rolled in high winds, according to the state’s Rural Fire Service.

Earlier in December, two other NSW volunteer firefighters died after their vehicle hit a tree during firefighting operations.

The country relies heavily on its volunteer firefighters, who in some cases have been putting in 16-hour days to help tackle the blazes.

Earlier this week Prime Minister Scott Morrison, who cut short a family holiday in Hawaii to deal with the fire crisis, announced the government would be authorizing payments of up to $6,000 (US$4,200) for volunteer fire fighters “where they have been called out for extended periods of service.”

There is a nationwide fire crisis

Fires have devastated parts of Australia for months. Across Victoria, 70 new fires started on Monday, of which more than 20 are still active. In the neighboring state of NSW there are more than 100 fires burning on Tuesday, of which 60 are yet to be contained.

Many of the fires were started on Sunday by dry lightning, and rapidly spread due to strong winds and hot, dry weather.

More than 900 homes have been destroyed in NSW since the start of the fire season, and that number will likely increase as firefighters struggle to contain the massive fires.

NSW and Victoria are some of the hardest-hit locations, but there have been fires occurring in every state across Australia as weather conditions worsen.

State and federal authorities have activated emergency resources and deployed thousands of firefighters since the fire season began in early September. The Australian Defence Force has sent assistance to multiple states, including air force aircraft and army personnel. The United States, Canada, and New Zealand have also sent additional firefighters to help.

Fireworks will go ahead

For weeks, Sydney has been shrouded in smoke from bushfires, leading to calls to cancel the city’s famed New Year’s eve fireworks.

Despite more than a quarter of a million people signing an online petition calling for the annual display to be scrapped, the event will go ahead.

The Change.org petition said the funds that would normally be spent on the dazzling firework display should be redistributed towards the firefighting efforts.

But Sydney’s Lord Mayor Clover Moore said: “Our fireworks are planned 15 months in advance and most of the budget — which is largely allocated to crowd safety and cleaning measures — has already been spent.”