One of the NY Hanukkah stabbing victims may not regain consciousness, his family says 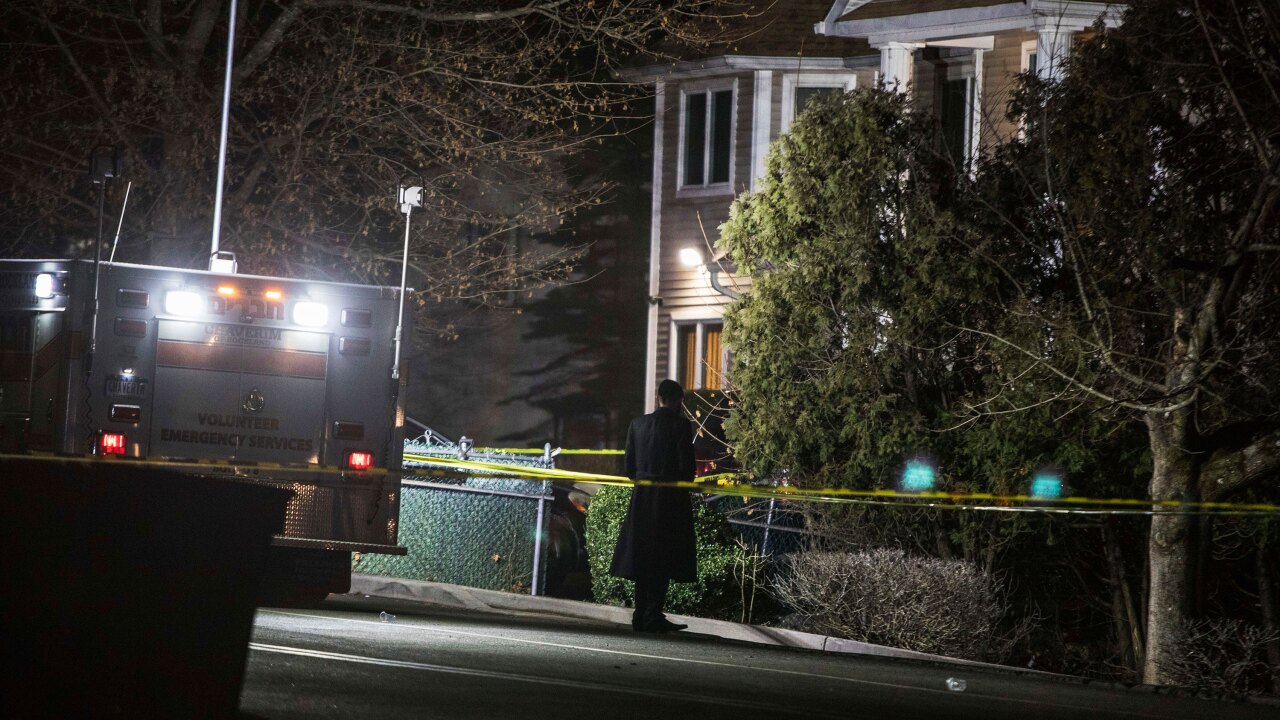 An Orthodox Jewish man stands in front of a residence in Monsey, N.Y., Sunday, Dec. 29, 2019, following a stabbing late Saturday during a Hanukkah celebration. A man attacked the celebration at the rabbi’s home north of New York City late Saturday, stabbing and wounding several people before fleeing in a vehicle, police said. (AP Photo/Allyse Pulliam)

Doctors are not optimistic one of the men stabbed at a New York Hanukkah celebration will regain consciousness, according to the victim’s family.

An Orthodox Jewish man stands in front of a residence in Monsey, N.Y., Sunday, Dec. 29, 2019, following a stabbing late Saturday during a Hanukkah celebration. A man attacked the celebration at the rabbi’s home north of New York City late Saturday, stabbing and wounding several people before fleeing in a vehicle, police said. (AP Photo/Allyse Pulliam)

Josef Neumann, who was one of five people assaulted Saturday in the upstate hamlet of Monsey, suffered multiple stab wounds to his head, neck and arms, his family said in a statement posted to social media by the Orthodox Jewish Public Affairs Council. Shoshana Bernstein, a spokeswoman for the Orthodox Jewish community in Monsey, said the statement is accurate.

“Doctors are not optimistic about his chances to regain consciousness, and if our father does miraculously recover partially, doctors expect that he will have permanent damage to the brain; leaving him partially paralyzed and speech-impaired for the rest of his life,” the statement said.

The family described Neumann’s condition as dire and said a weapon “penetrated his skull directly into the brain.” His right arm was shattered.

“Our father has seven children, many grandchildren, a great grandchild, and brothers and sisters,” the statement said.

“We shall not let this terrible hate-driven attack be forgotten, and let us all work to eradicate all sorts of hate.”

Related: Hanukkah machete attack could have been worse had it happened 10 minutes earlier, guest says

Yisroel Kraus, who was a guest at the home of the rabbi where a man wounded the victims with a machete, described Neumann as a mentor and an “incredibly kind human being.”

“One of the most selfless people I know,” Kraus told CNN. “Since I knew him he was a very poor man. He never had a dime to his name and always goes around collecting money for other poor families. It was never about himself.”

Another survivor was hit in the side of the head by the suspect’s machete and doctors had to use three staples to close his wounds, Rabbi Shmuel Gancz told CNN Tuesday.

Shloime Rottenberg, the son of Rabbi Chaim Rottenberg, had just finished the ceremony of lighting the menorah at his father’s home when the attack started, Gancz said.

“They are grateful for what they deem a minor injury considering where else the machete could have hit him, such as his eyes,” Gancz said of Rottenberg and his family.

Authorities identified the suspect as Grafton Thomas, 37. He pleaded not guilty to five counts of attempted murder Sunday. A day later, he was charged by federal agents with obstruction of free exercise of religious beliefs involving an attempt to kill — a federal hate crime. A judge ordered him to be detained.

Federal prosecutors said Thomas entered the rabbi’s home in Monsey, north of Manhattan, on Saturday night and told the dozens of people there “no one is leaving.” He attacked them with an 18-inch machete, with at least five victims suffering injuries ranging from slash wounds to a severed finger and a skull fracture, federal prosecutors said.

Click here for full coverage of the Hanukkah celebration stabbings.