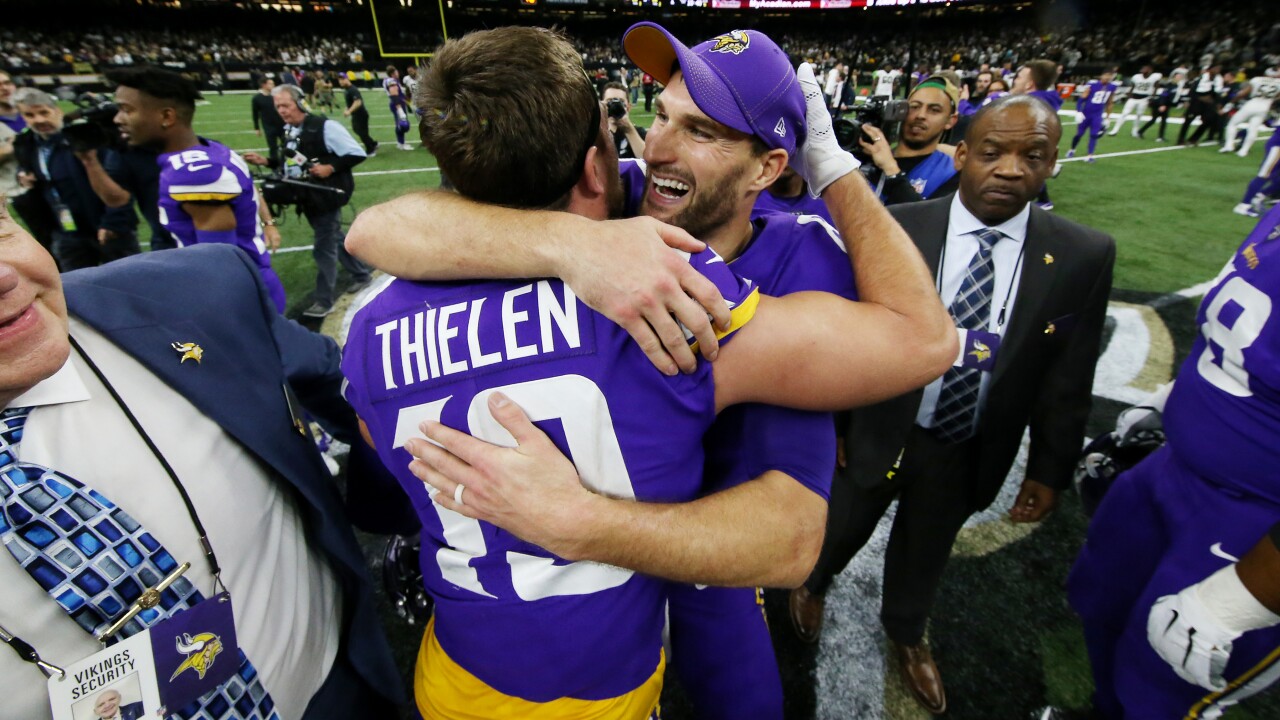 NEW ORLEANS, La. (AP) — Kirk Cousins hit tight end Kyle Rudolph with a 4-yard fade on third-and-goal in overtime, and the Minnesota Vikings pulled out a 26-20 victory over the Saints in the wild-card round of the NFC playoffs on Sunday.

The Vikings will face the top-seeded 49ers in San Francisco on Saturday afternoon in the divisional round.

It was the second straight time the Saints’ season had ended in overtime in the Superdome.

The disappointing end for the favored Saints (13-4) came nearly a year after New Orleans lost in the NFC championship game to the Los Angeles Rams in a game marred by missed Rams penalties late in regulation.

Dalvin Cook gained 130 yards from scrimmage and scored two touchdowns. Cousins finished with 242 yards and one TD passing, highlighted by his 43-yard completion to Adam Thielen on the opening possession of overtime to give Minnesota (11-6) the ball on the Saints 2-yard line and set up the winning score.

Replays on the video board showed a possible push-off by Rudolph on defensive back P.J. Williams as he leaped to make the catch that ended the game.

“They brought all-out pressure and then Kirk made a great throw,” Rudolph said. “Like I said, I’m just so proud of our guys. I’m proud of Kirk, blocking out the noise and coming down here and playing huge all game.”

Minnesota’s defensive front forced record-setting quarterback Drew Brees into two turnovers — one game after the Saints had finished the regular season with an NFL record-low eight. Brees also was sacked three times and finished 26 of 33 for 208 yards, one TD and an interception.

New Orleans trailed by 10 at the start of the fourth quarter but forced overtime with Brees’ 20-yard touchdown pass to Taysom Hill, a key defensive stand after Brees’ lost fumble, and Wil Lutz’ 49-yard field goal with 2 seconds left.

Brees’ first turnover came on a deep throw downfield for Ted Ginn Jr. late in the first half. Safety Anthony Harris corralled the ball as he fell to the turf and then returned it 30 yards across midfield. That led to Cook’s first touchdown on a 5-yard run that gave the Vikings their first lead at 13-10.

The Saints were threatening to score with less than five minutes remaining in the fourth quarter when Danielle Hunter sacked Brees, who lost the ball. It was recovered by defensive tackle Jalyn Holmes on the Minnesota 36.

Saints safety Vonn Bell, back from a knee injury that sidelined him three games, helped set up the opening scoring chance of the game when he recovered Thielen’s fumble, which was forced by recently acquired cornerback Janoris Jenkins.

But Everson Griffen’s sack of Brees on third-and-goal limited Minnesota’s damage to a 29-yard field goal.

Hill, the Saints’ do-it-all reserve QB, was instrumental in the first touchdown drive of the game. He rushed for a first down before completing a 50-yard pass to rookie Deonte Harris and then, while lined up as a tight end, delivered a block that helped Alvin Kamara score on a 4-yard run around the right end to make it 10-3.

Hill was the Saints’ leading rusher with 50 yards and Kamara was held to 21 yards rushing on seven carries.

Deonte Harris’ 54-yard kickoff return and Brees’ 20-yard pass to Michael Thomas in the final seconds of the first half gave New Orleans a chance to tie it, but Lutz’s 43-yard field-goal attempt went wide right.

In the third quarter, Hill’s apparent first-down run on a fake punt was nullified by tight end Josh Hill being called for a false start.

Vikings: Tight end Tyler Conklin was carted from the sideline to the locker room in the first half. … Right tackle Brian O’Neill walked off with an apparent leg injury in the third quarter but returned.

Saints: Linebacker Kiko Alonso limped off the field with what the Saints said was a knee injury in the second quarter and did not return. … Left guard Andrus Peat limped to the sideline with an apparent right leg injury in the fourth quarter but returned.

Vikings: Prepare for next weekend’s trip to San Francisco to face a 49ers team that, like the Saints, went 13-3 in the regular season.

Saints: Head into the offseason with contract work ahead on key personnel, including Brees, who turns 41 on Jan. 15, and versatile running back Alvin Kamara, who could opt to hold out for an extension as he enters the final season of his rookie deal.