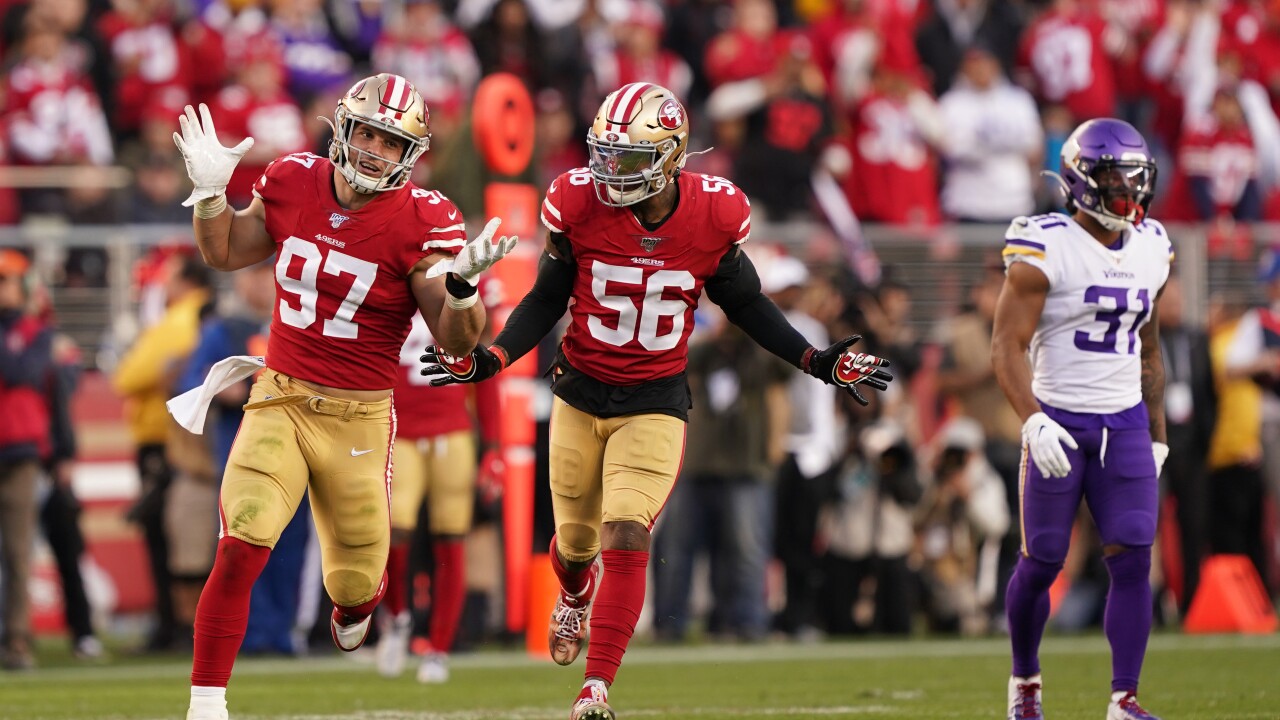 SANTA CLARA, CALIFORNIA – JANUARY 11: Nick Bosa #97 and Kwon Alexander #56 of the San Francisco 49ers celebrate after a sack during the second half against the Minnesota Vikings during the NFC Divisional Round Playoff game at Levi’s Stadium on January 11, 2020 in Santa Clara, California. (Photo by Thearon W. Henderson/Getty Images)

SANTA CLARA, Calif. (AP) — Jimmy Garoppolo threw a TD pass on his first opening drive as a playoff starter and then watched San Francisco’s defense and running game take over from there in the 49ers’ 27-10 victory over the Minnesota Vikings in the divisional round Saturday.

The Niners (14-3) first playoff game in six seasons and first ever at Levi’s Stadium turned into a lopsided one as top-seeded San Francisco turned a pair of second-half turnovers by Minnesota (11-7) into 10 points.

Richard Sherman set up Tevin Coleman’s second short touchdown run of the game with an interception against Kirk Cousins and Marcus Sherels’ fumbled punt led to a field goal that made it 27-10 early in the fourth quarter.

San Francisco didn’t allow Minnesota to gain a first down for more than 27 minutes of game action starting late in the second quarter.

The Niners will host the NFC championship game next week against the winner of Sunday’s game between Seattle and Green Bay.

Garoppolo threw an interception deep in his own territory late in the first half and then spent most of the second half handing the ball off to Coleman and Raheem Mostert.

There was little reason for coach Kyle Shanahan to take chances the way his defense completely bottled up talented runner Dalvin Cook. That took away Minnesota’s play-action game and forced Cousins into becoming a drop-back passer.

Cousins finished 21 for 29 for 172 yards with his only big play coming on a 41-yard TD pass to Stefon Diggs in the first quarter.

Cook was held to 18 yards on nine carries as the Niners defense was back to its dominant early season form thanks in part to the return from injuries of defensive end Dee Ford, linebacker Kwon Alexander and safety Jaquiski Tartt.

San Francisco had six sacks and held Minnesota to 147 yards for the game with a large chunk coming on two late garbage-time drives.

Eric Kendricks intercepted a pass from Garoppolo late in the first half to give the Vikings the ball at the San Francisco 29. Minnesota couldn’t capitalize with Dee Ford getting a third-down sack in his return to the lineup from a hamstring injury. Dan Bailey’s 39-yard field goal cut the Niners lead to 14-10 at the half. The interception was the 19th turnover this season by Garoppolo, who had the most giveaways in the regular season of any player who made the playoffs.

Garoppolo showed he has skills beyond his throwing. He threw a lead block on 255-pound linebacker Anthony Barr on a reverse by Deebo Samuel in the second quarter. Samuel fumbled the ball on the play but replay ruled his knee was down, negating the turnover. That proved especially important when Coleman capped the drive with a 1-yard TD run.

The Vikings scored on their second drive of the game when Diggs outmaneuvered Ahkello Witherspoon for a 41-yard TD catch. It was the fifth TD pass allowed by Witherspoon in the past three games and he was replaced at cornerback the following drive by Emmanuel Moseley.

Vikings: RT Brian O’Neill left with a head injury after a blindside block from Nick Bosa in the third quarter following Cousins’ interception.

49ers: Mostert (calf) and LB Mark Nzeocha (stinger) left the game in the second half.

49ers: NFC championship game next Sunday against either Seattle or Green Bay.