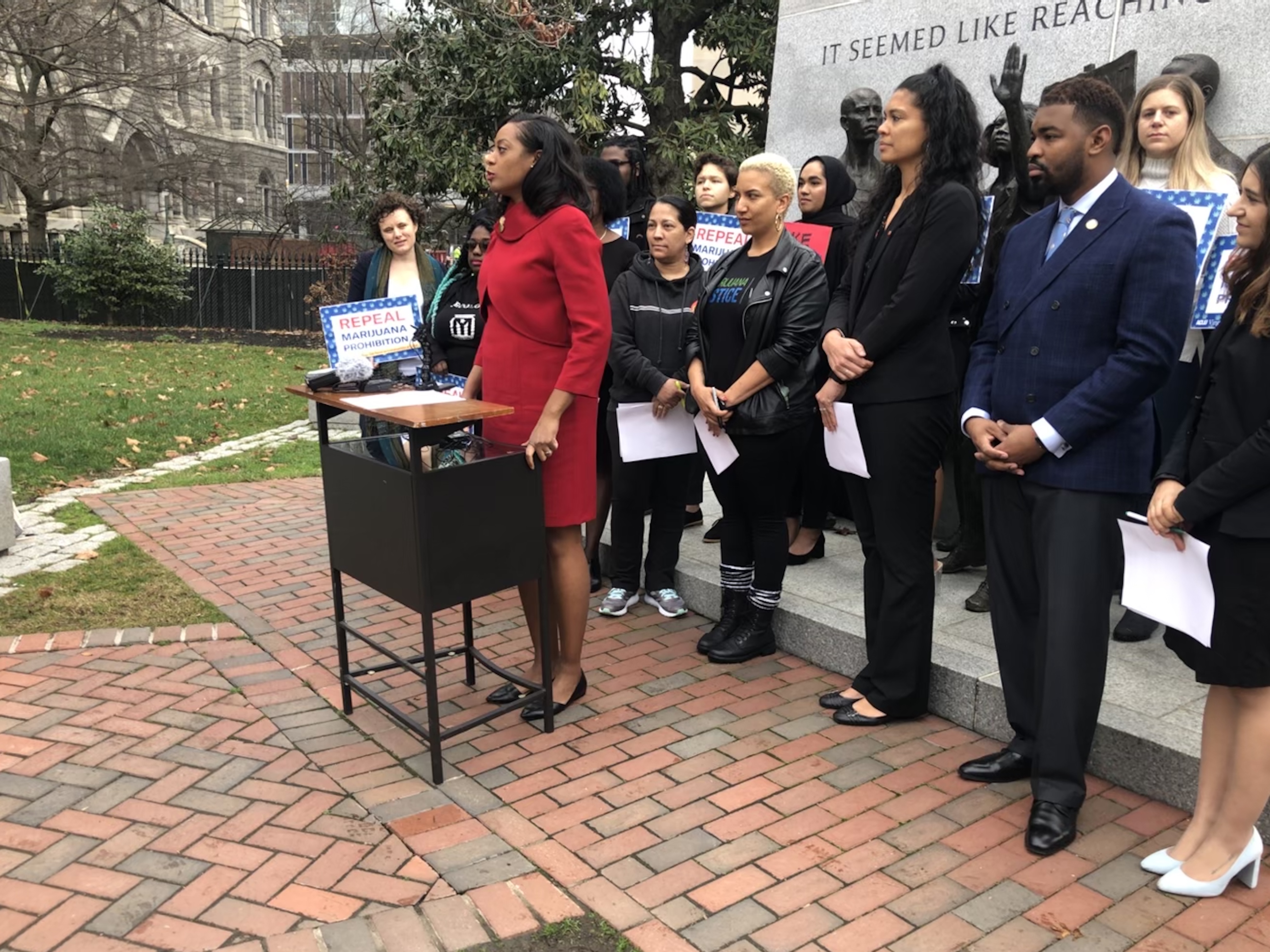 RICHMOND, Va. – Advocates dressed in black stood Wednesday at the base of the Virginia Civil Rights Memorial to voice their support of marijuana legalization, repeating a variation of, “the time is now,” in each of their statements.

Participants dressed in black “in order to stand in solidarity with the black and brown bodies that have been criminalized for decades here in the commonwealth,” said Chelsea Higgs Wise, co-founder of Marijuana Justice, a Virginia-based nonprofit organization that aims to educate people on the history of cannabis criminalization in the U.S.

“Lean on your legislators and make sure that they understand the effort to legalize marijuana is here and we’re bringing it to your front door because now is the time to fully have criminal justice reform in a meaningful way,” Carroll Foy said.

The bill wants to exclude marijuana from a list of controlled substances that are illegal to possess. Under current law, less than half an ounce of marijuana is considered a class one misdemeanor.

A “first offender’s rule” is offered on first convictions in lieu of class one misdemeanor penalties. The rule includes probation, drug testing and community service. Subsequent convictions are punishable by up to one year in jail and a maximum fine of $2,500.

Possession of more than half an ounce of marijuana is by law considered an intent to distribute and is charged as a felony, punishable by one to 10 years in prison.

Capital News Service reported  that in 2018, the only offenses more common than marijuana possession were traffic-related, such as speeding or reckless driving. Marijuana arrests that year were at their highest level in at least 20 years, with nearly 29,000 arrests.

“Arrests for marijuana possession are significantly higher for blacks and people of color, even though data has shown that there is no higher rate usage with people of color than there are with white people,” said Del. Joshua Cole, D-Stafford, chief co-patron of HB 1507. “But yet we are constantly the ones that are taking the brunt of this.”

While African Americans make up 19% of Virginia’s population, they consisted of nearly half of all marijuana convictions in 2018, according to a Capital News Service analysis of court records.

Carroll Foy said that African Americans are three times more likely than any other race to be stopped, arrested and convicted for possession of marijuana.

Nine other bills have been introduced this session relating to the possession of marijuana. Some propose legalization, while others propose decriminalization. Although the terms are used interchangeably at times, the two carry dramatically different meanings.

Bills similar to HB 1507, like HB 87 and HB 269, propose the legalization of marijuana, which would lift existing laws that prohibit possession of the substance.

These bills would impose a $50 fee for consuming or possessing marijuna.

Ebbin’s bill would raise the threshold amount of marijuana subject to distribution or possession with intent to distribute from one-half ounce to one ounce. Herring’s bill would impose a $250 fee if the offender was consuming marijuana in public. However, the drug would remain illegal.

The ACLU said last week at a press conference that decriminalization and civil offenses still hold and create a number of issues — someone who wants to contest the citation would have to do so without a lawyer, and those who cannot afford to pay upfront would have to go to court, which usually includes more costs and fees.

The group instead wants to see a full repeal of the prohibition on marijuana.

“It’s clear time for cannabis reform has come,” Herring said. “Justice demands it, Virginians are demanding it, and I’m going to make sure we get it done.”
Ashna Khanna, legislative director of the ACLU of Virginia, said they have confirmed Herring’s support of HB 1507. The organization, along with 11 others, sent a letter to Gov. Ralph Northam requesting support of legislation to legalize marijuana and hope that he will be open to meeting with them soon.