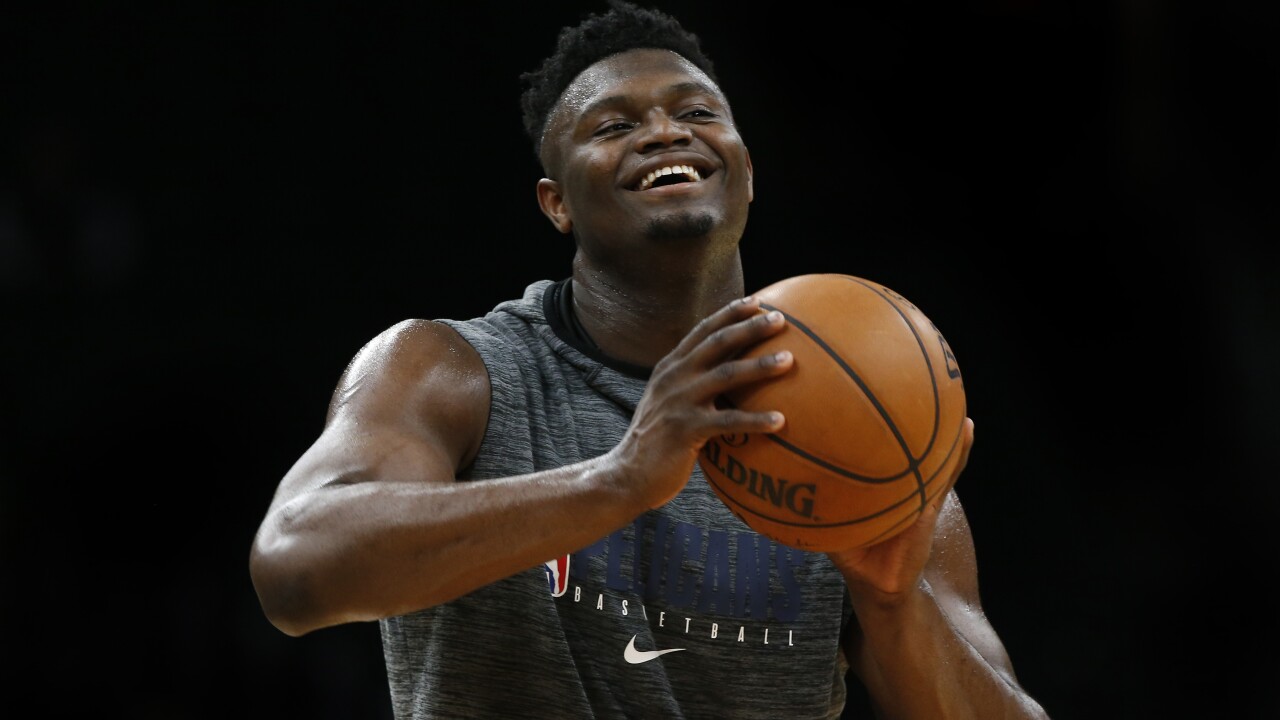 METAIRIE, La. (AP) — Zion Williamson opened with a joke — about himself.

A monthslong recovery from arthroscopic knee surgery is finally behind the New Orleans Pelicans rookie and top overall draft choice. And when Williamson discussed the long wait for his highly anticipated NBA regular-season debut on Wednesday night against San Antonio, he poked fun at himself for apparently dozing off while sitting on the bench during a couple of recent games.

“If ya’ll saw me meditating on the sidelines, it’s been very difficult,” Williamson said with a grin. “But it’s finally here. I finally get to go back out there.”

The whole league and basketball fans around the world seem to be as excited as he is.

The 6-foot-6, 285-pound Williamson has been an internet sensation since video clips were posted of his imposing frame barreling downcourt and soaring to the hoop for rim-rattling dunks as a high school player in Spartanburg, South Carolina.

The hype surrounding him only accelerated when he starred at Duke, averaging 22.6 points to go with nearly nine rebounds and nearly two blocks per game.

His selection at No. 1 overall, unsurprising as it was, nonetheless ignited a celebratory frenzy among fans gathered for a draft-night block party in downtown New Orleans.

He drew a capacity crowd sprinkled with sports and entertainment celebrities to the Pelicans’ Las Vegas Summer League opener, only to make an early exit with a bruised left knee.

When Williamson returned for the preseason, he looked comfortable going strong to the hoop against the likes of Utah’s Rudy Gobert, the two-time reigning NBA defensive player of the year.

In four preseason games, Williamson averaged 23.3 points and 6.5 rebounds before being sidelined to have surgery on Oct. 21, the day before the regular-season opener. The initial prognosis was a six- to eight-week absence, but the Pelicans took a cautious, comprehensive approach with their prized draft pick that lasted much longer.

“There’s a lot of times when I wanted to punch a wall or kick chairs because it’s frustrating,” Williamson said. “To not be able to move your body the way you want to, not to make any athletic movements, I mean, it’s tough. Especially because I’m 19 and I haven’t even played my first NBA game. It was tough, but I battled through it.”

Williamson’s rehab went well beyond the healing of the lateral meniscus of his knee. Team training staff analyzed and changed the way he moved, jumped and, most importantly, landed.

“It’s not landing (with) straight legs. Kind of don’t let all my force go into my legs,” Williamson explained. “It’s a lot of technical stuff.”

Pelicans staff also worked to make Williamson more flexible and challenged him mentally to consider when — and when not — to exert himself during games.

“I did learn a lot about my body in this time period,” he said. “It came a lot from watching film and where to use my energy and try to make smarter reads and not exhaust so much energy.”

Last week, David Griffin, the Pelicans’ first-year executive vice president of operations, portrayed Williamson’s rehabilitation process as something that made the rookie capable of performing physically on a level not previously exhibited.

How many minutes Williamson gets to display his newfound physical form initially remains to be seen. Griffin has said there won’t be a specific minute restriction but that Williamson’s time on the court will be limited at first and that he might not play the second of games on consecutive nights.

At this point, Williamson will take whatever minutes he can get. He dismisses the notion that his return comes with a lot of pressure to meet fans’ sky-high expectations.

“Not really putting no pressure on it at all,” Williamson said. “I love to play basketball. So I’m just looking to go out there, have fun and compete.”

And he’ll be competing in meaningful games.

That didn’t seem probable when the Pelicans lost a franchise-record 13 straight early this season, but they’ve responded with 11 victories in 16 games and entered their final 38 games just 3 1/2 games out of the final playoff spot in the Western Conference.

“It’s very exciting to be coming back during this time,” Williamson said. “We did go through a bad stretch, but things have turned around. Everybody’s been playing better. I’m just looking to go join in and have some fun.”

If fun equals winning, New Orleans could be in for a compelling second half of the season.