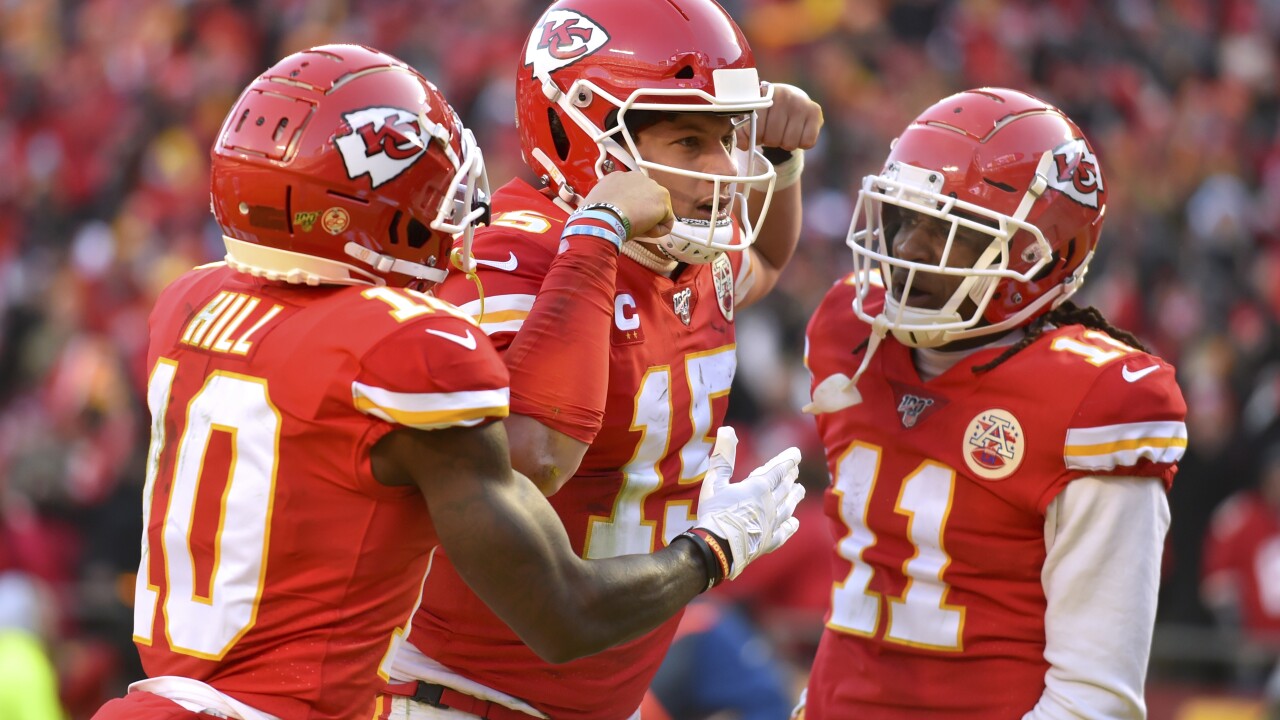 Kansas City Chiefs’ Patrick Mahomes (15) celebrates with Tyreek Hill (10) and Demarcus Robinson after running for a touchdown during the first half of the NFL AFC Championship football game against the Tennessee Titans Sunday, Jan. 19, 2020, in Kansas City, MO. (AP Photo/Ed Zurga)

MIAMI (AP) – It has been a while since a Super Bowl has appeared to be such a toss-up. This one between the NFC champion San Francisco 49ers and the AFC champ Kansas City Chiefs is a difficult game to judge.

The 49ers (15-3) have gone from the No. 2 pick in the draft last April to the verge of another championship. The Chiefs (14-4) were in the AFC title contest last year and fell in overtime.

In 2019, both teams were dynamic and won a bunch of big games. Now they meet in the biggest one.

Here’s how the Chiefs and 49ers match up in the Super Bowl:

WHEN THE CHIEFS HAVE THE BALL

It’s not difficult to figure out how the Chiefs will approach any game. QB Patrick Mahomes (15) will test defenses with his arm and skill for reading schemes. He has game-breakers in WRs Tyreek Hill (10) and Sammy Watkins (14), which means single coverage on either is a gamble. TE Travis Kelce (87) is a first-down machine and a clutch performer all around.

Damien Williams (26) keys the backfield and comes off two exceptional postseason showings, even though Mahomes has often been the leading rusher by creating the way he did in the AFC championship game with a brilliant tap dance down the sideline for a go-ahead score.

That puts a huge onus on the Niners to get an effective pass rush, something they have done virtually every week. They will harass Mahomes with a front seven led by rookie Nick Bosa (97), a force on the outside. DT DeForest Buckner (99) has had a strong impact, and LBs Fred Warner (54) and Kwon Alexander (56), who is finally healthy, are formidable. Having edge rusher Dee Ford (55), who was a Chief last season, bolsters the unit.

They will challenge a good Kansas City offensive line anchored by RT Mitchell Schwartz (71) and LT Eric Fisher (72). But if the O-line holds true, San Francisco could struggle in coverage against the speedy Chiefs wideouts. CB Richard Sherman (25) remains outstanding, even if the rest of the secondary isn’t at his level.

WHEN THE 49ERS HAVE THE BALL

After seeing the star turn by RB Raheem Mostert (31) against Green Bay, the Chiefs must be wary of what usually is a three-pronged rushing attack. Tevin Coleman (26), if healthy, and Matt Breida (22) give QB Jimmy Garoppolo options in the backfield, although Mostert is certain to be the main man. They operate behind a veteran line led by LT Joe Staley (74) and second-year RT Mike McGlinchey, and Kyle Juszczyk (44) is the NFL’s top fullback — as a blocker and receiver.

If the Niners run the ball effectively, it could open some wide spaces for All-Pro TE George Kittle (85), the most dynamic offensive player they have. Kittle is a difference-maker who will force the Chiefs to use double coverage at times. S Tyrann Mathieu (32) will see a lot of Kittle, and S Daniel Sorensen (49), who has had a monstrous playoffs, will be in the mix.

Covering WRs Emmanuel Sanders (17), Kendrick Bourne (84) and emerging rookie Deebo Samuel (19), who is fearless going over the middle, is another chore the Chiefs must handle well. That will require big-time contributions up front from Chris Jones (92) and Frank Clark (55) and LBs Anthony Hitchens (53) and Damien Wilson (54).

Kansas City has a dangerous kick returner in Mecole Hardman (19), one of the NFL’s fastest players. The rookie does get antsy to return the ball, though, and that can lead to bad decisions. Harrison Butker (7) is a reliable placekicker with good range. He did miss three extra points, one fewer than his misses on field goals. Veteran punter Dustin Colquitt (2) had a kick blocked by the Texans for a TD, but he’s generally reliable.

So is San Francisco PK Robbie Gould (9), in his 15th pro season. He kicked in a Super Bowl for the Bears in 2007, so this stage won’t unnerve him. Punter Mitch Wishnowsky is a mere pup in comparison, finishing off his first NFL season. Richie James ranked fifth in overall kick and punt returns for the 49ers, but isn’t a game breaker like Kansas City has available.

Kyle Shanahan, in his third year at the helm, took the 49ers from choosing second in the 2019 draft (Bosa was the prize) to their seventh Super Bowl. His versatile offense has been solid, and the defense under coordinator Robert Saleh has looked immovable at times. The front line is superb, and Saleh, like Shanahan, stays aggressive all game. That showed particularly in the past two weeks.

Andy Reid lost in the Super Bowl with Philadelphia in 2005, and he has a better team now. He has been masterful in his handling of Mahomes and the schemes that make KC’s offense as dangerous as any. He was wise enough to bring in an aggressive defensive coordinator after last year’s debacle on that side of the ball cost the Chiefs a shot at the NFL title. It took a while before Steve Spagnuolo’s system took hold, but it has looked strong in the second half of both playoff games. Kansas City must beware of falling behind again, though.

Reid seeks his first Super Bowl title as a head coach, which could be the catalyst to eventual Hall of Fame selection. The Chiefs haven’t won it all in 50 years, and this is the best team they’ve had in that span. They are more balanced than in past years, have a nice mixture of youth and experience and plenty of confidence.

Shanahan has something to prove after the super debacle of the second half of the big game against New England when he was the Falcons’ offensive coordinator in the 2016 season. San Francisco seeks its sixth overall crown in the Super Bowl era, which would tie for the most. And after romping over Minnesota and Green Bay, there is no shortage of confidence with the Niners.