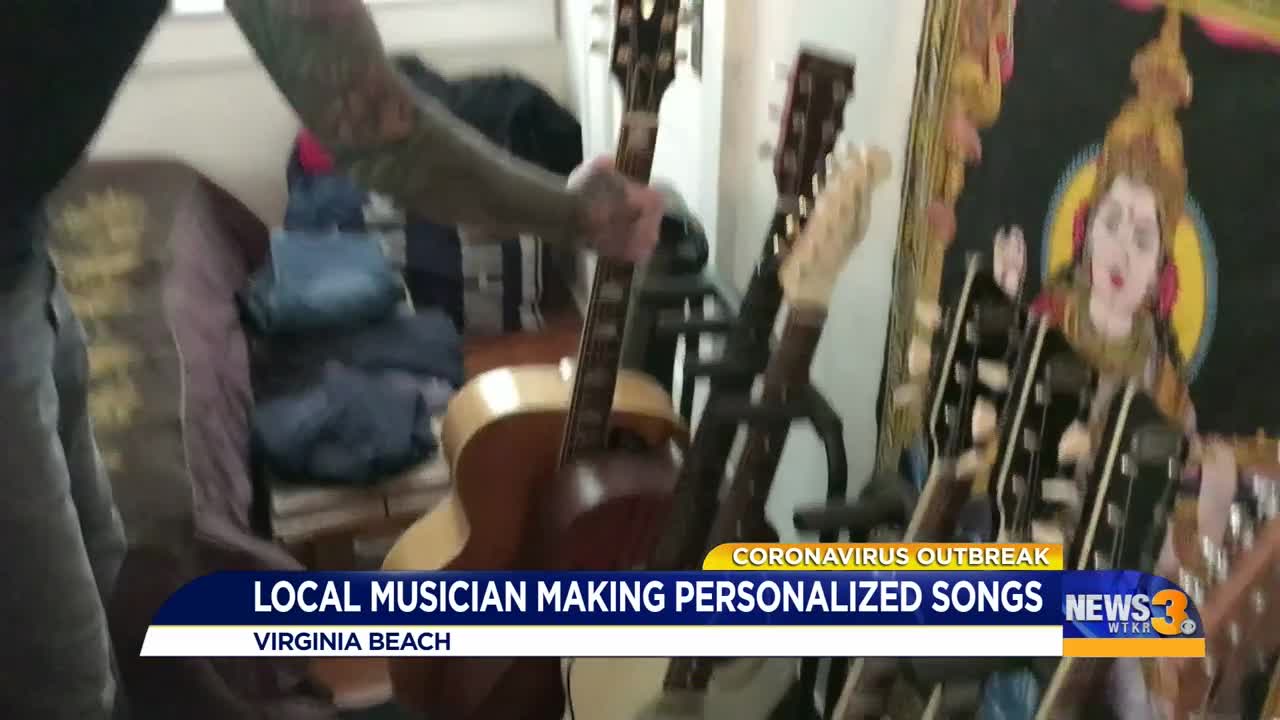 VIRGINIA BEACH, Va. -- COVID-19 has canceled several concerts for full-time musician Bennett Wales. He relies on performing at concerts as a source of monetary income.

"My biggest joy is performing live and helping people have a good time," Wales said. "Music has always been the centerpiece of my life since I was like a little boy. I’ve always loved performing."

His cluster of acoustic and electric guitars, the same ones he uses for his performances, laid still on a rack inside his bedroom. Those guitars, for the most part, have been untouched due to the pandemic after a talent booker he works for told him venues had canceled booked concerts.

Bennett said he would never have thought a global pandemic would be the reason he would be out of work. The cancellations were a result of the statewide shutdown and social distancing rules.

"What went through my mind was, 'I’m going to have to figure something else out,'" Wales explained, "'try to figure some other way to bring money in so I can keep my head above water and keep the bills paid.'"

Around the same time the shutdown took effect, he created The Song Shop, an Instagram page where people can send him personalized song requests. So far, he's received 20 song requests from interested users.

"I’m still not caught up. We’ve been doing this for about two months since the lockdown started," Wales said.

Wales described the process between him and inquirers as collaborative and said it gives them a chance to be creative. He said he realized, as the requests came in, he did not want to sacrifice quality over quantity.

"I wanted to make sure to give every song its time to make each song special," Wales said.

As for prices and costs for his work, Wales said it is "donation-based," where people can pay him what they believe is fair.

Related: Virginia Beach musician using his talent to give back during crisis

"They can give me a description of what the song can be - if they want a specific genre, if they want it to be country, want it to be an R&B song, if they wanted to be a heavy metal song, whatever their idea is," he said. "It’s helped me to keep my head above water, keep the bills paid, so I’m very grateful and very thankful."

Some of the requests he received have been humorous, some have had deep personal messages. Wales said he does not mind what the topic is so long as he can continue practicing his craft.

"I’ve gotten requests from folks who have lost loved ones. People have written in and they’re like, 'It's my dad’s birthday or it’s my mom's birthday,'" Wales explained. "I had a guy write in that he wants me to write a song about ham sandwiches."

He said he will continue to write and produce personalized songs for as long as requests come in. If you are interested in inquiring about a personalized song, you can contact Wales through his Instagram page, The Song Shop.