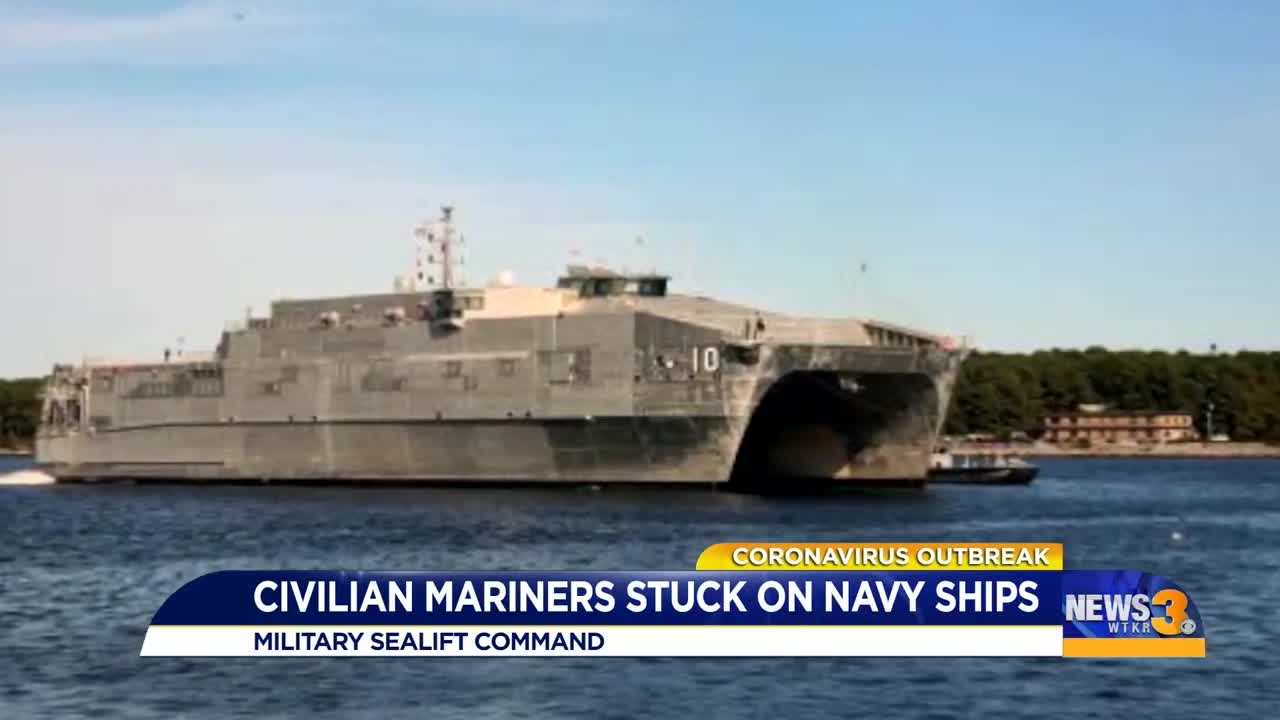 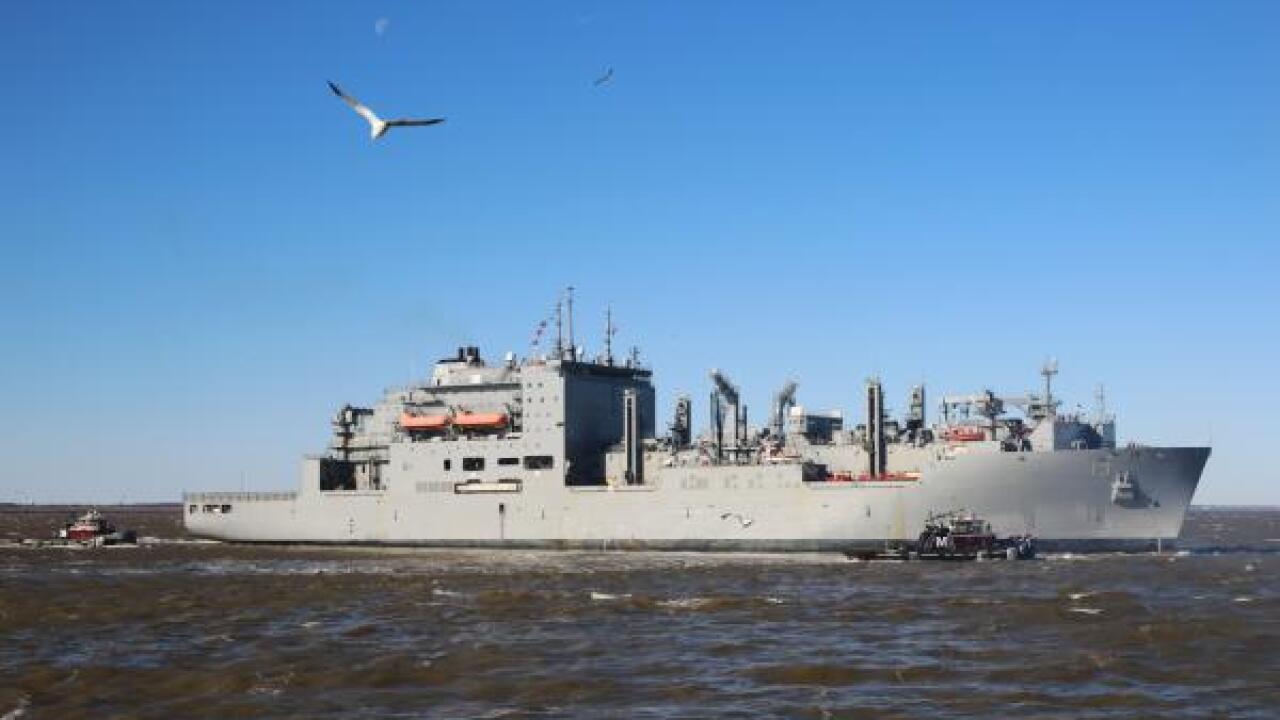 HAMPTON ROADS, Va. - Military Sealift Command civilian mariners who are frustrated and upset by orders that restrict them from leaving their ships while the coronavirus pandemic continues have reached out to News 3.

Thousands of civilian mariners are on Military Sealift Command ships around the world, and many in our region.

On March 21, a “Gangway Up” order was put into effect, which forced civilian mariners to stay on the ship.

In part, the order read:

We are facing an unprecedented challenge with the COVID-19 virus: one that requires swift implementation of actions that will protect the health of our afloat units and preserve our warfighting and humanitarian readiness. With this in-mind, Commander MSC has issued a Fleet-wide “gangway-up” order. Under this order, all MSC Units are to suspend crew shore liberty worldwide; this order applies to Government-owned/Government-operated vessels, as well as, vessels operated under MSC contracts.

Captain Randall Rockwood is with the International Organization of Masters, Mates & Pilots, a union for those impacted. He serves as the Vice President of Federal Employees Membership Group.

“Masters, Mates and Pilots feel that the government, Military Sealift Command did not abide by the obligation to negotiate a change in working environment as drastic as this,” said Rockwood.

“They were unable to put their cars in storage, take care of purchasing medical or personal hygiene requirements; they were unable to deal with the family issues, and in a moment they were restricted to the ship and told not to get off,” said Rockwood.

He said on certain ships Navy personnel are allowed to leave the ships along with contractors, but the civilian mariners are not and required to stay on the ships.

Many of the civilian mariners told News 3 they worried about their own safety with people coming off and on the ship. Several of them said they are in close quarters.

We reached out to Military Sealift Command. Below are their responses to our questions:

Why are these regulations in place?

In an effort to limit movement of our crews in order to protect the health and safety of our Mariner force, execute effective counter-COVID tactics, and preserve response options for our Nation, on March 21, 2020, Military Sealift Command issued a Fleet-wide suspension of all liberty and leave for civilian mariners assigned to MSC ships worldwide. This order applies to Government-owned/Government-operated vessels as well as vessels operated under MSC contracts.

Why are the regulations different for members of the military and the civilian mariners?

This action protects our crews, limits COVID-19 outbreaks on our ships, and preserves the ability of our ships and crews to get underway and execute their worldwide missions. MSC Mariners are administratively controlled by MSC, while Sailors are administratively controlled by different Navy commands. MSC continues to work with the leadership of all of our ships to ensure all crewmembers, uniformed and civilian, are protected.

What forms of protection are they given to prevent transmission of the coronavirus?

To control the risk of exposure on our ships, all personnel accessing the ship are screened using an MSC Area Command provided AOR-specific COVID-19 screening questionnaire. Personnel who are identified as being at risk for COVID-19 infection are not permitted on board. Every effort is made to preserve a virus-free environment by practicing social distancing, wearing appropriate personal protection equipment (PPE), washing hands, and following the technical guidance for the cleaning/sanitization of shipboard spaces, machinery and cargo. As an example, if a contractor must come aboard to provide needed repairs or technical assistance, every effort is made to limit the movements and interactions with these contractors.

Do you feel they are being treated fairly?

We understand the strain this puts on our Mariners and their families, but we are operating in unprecedented times and these actions are critical to ensuring their safety. Currently, the CDC says that the best way to prevent illness is to avoid being exposed to this virus. The virus is spread mainly from person-to-person. Therefore, reducing close personal contacts and maintaining physical distance from others who might be carrying the virus is necessary. Our aggressive mitigation strategies are designed to prevent the spread of infection onboard our vessels, which protects everyone. We are confident the order is effective in reducing the spread of coronavirus on MSC ships.

Are there any plans to lift the restrictions?

MSC will continue to monitor the situation and is working to devise processes, procedures, and mitigations to modify the restrictions while continuing to reduce the threat to the health and safety of the Mariner work force and continued operation of its ships.

“You obviously shouldn’t be going around and picking up infections going back to the ship and compromising the mission. That’s not what we’re after,” said Rockwood. “What we want is for the civilian mariners to get treated like all other mariners, including active-duty Navy.”

Rockwood said there are also issues involving compensation for the time the civilian mariners are forced to stay on the ship.

We have asked Military Sealift Command about this.

They issued the following statement:

Matters concerning pay are currently being grieved by MSC labor unions and it would be inappropriate for me to comment. MSC has and will continue to respond to all Congressional Inquiries in a timely manner. I just want to reiterate that we understand the strain this puts on our Mariners and their families, but we are operating in unprecedented times and these actions are critical to ensuring their safety.

News 3 heard from many of the civilian mariners impacted by this.

They didn't not want their names made public for fear of punishment by superiors. Below are a few of their comments.

One person said, “Our restrictions are now causing moral issues, frustrations and a hostile work environment being that we (CivMars) cannot go home, cannot pick up personal supplies, cannot take our vehicles home or just have the ability to participate in preparing our families safety from this COVID-19!”

A second person said, “We were provided absolutely no time to prepare for being restricted to the ship. Imagine, showing up to work at your office, and being told you are no longer allowed to leave.”

A third person said, “Many of us have not seen our families since last summer, and to tell the crew that they can’t go home after serving their country overseas for almost a year is bringing the morale of the crew to a new low. The answer should be to allow all crewmembers and their families to be tested for the virus to ensure that everyone is negative and allow us to be rejoined with our loved ones.”

A fourth person said, “Many of us have not seen our families since last summer, and to tell the crew that they can’t go home after serving their country overseas for almost a year is bringing the morale of the crew to a new low.”

A fifth person said, "Mariners have been forced to remain aboard ships at the Norfolk Naval Base and again contractors and active duty personnel go home and travel the city as they please on a daily basis."

We reached out to Sen. Mark Warner's office and received the following statement:

This issue has been brought to my attention by mariners who have contacted my office. According to their accounts, civilian workers have not been allowed to disembark from their vessels, while their active duty and contractor counterparts have been permitted to do so. My office has reached out to the Navy to understand their protocols amid the health crisis and to see if they are willing to grant our civilian workforce some flexibility.

Civilian mariners have told News 3 they are reaching out to various lawmakers in an effort to get this situation investigated.

MSC said active duty Sailors who are part of the Medical Treatment Facility (MTF) team remains on board USNS Comfort while in Reduced Operating Status (ROS) are subject to the Gangways Up order. They said the Gangways Up order remains in effect for the near term as it has proven effective. They said there are 61 Sailors as part of the MTF aboard USNS Comfort. They also said USNS Mercy, the Navy’s other hospital ship, also has 61 active duty Sailors who are part of the MTF team that remains on board USNS Mercy while in ROS.