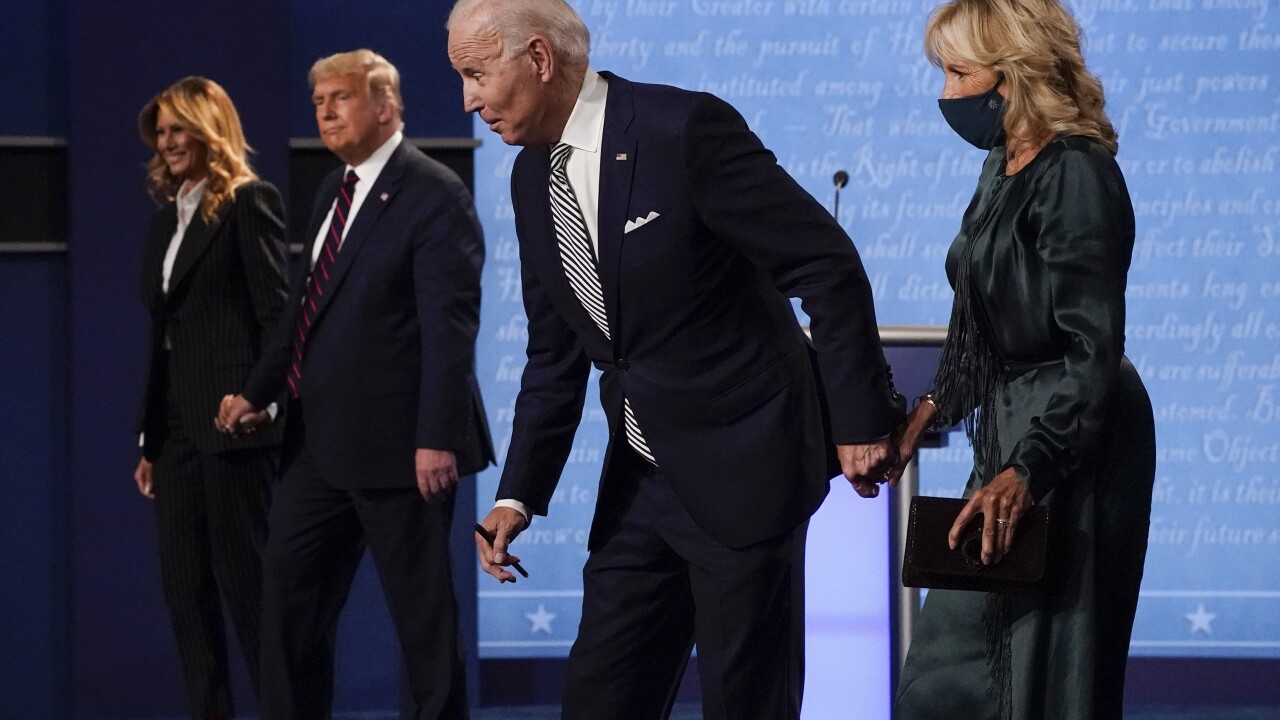 In a debate that featured frequent interruptions, President Donald Trump and former Vice President Joe Biden sparred for the first of three meetings between the two candidates.

Despite frequent interruptions and personal attacks, several important questions on policy were asked, but not always answered.

Biden said he is not in favor of the so-called “Green New Deal,” and instead prefers the “Biden Plan.” But on Biden’s website, he says, “Biden believes the Green New Deal is a crucial framework for meeting the climate challenges we face.”

When pressed on the cost of his plan, Biden said his plan would add millions of jobs.

"We are going to be in a position where we can create good jobs by making sure the environment is clean and we are all in better shape," Biden said.

2) A vaccine is coming, Trump says

Trump said that the US will see coronavirus vaccines faster than some public health experts say the country should expect to see them.

“We have our military that delivers soldiers and they can do 200,000 a day,” Trump said.

Trump said that the federal response to the coroanvirus has saved thousands of lives.

As Senate Democrats have toyed with the idea of adding Supreme Court justices if he is elected along with a Democratic-majority Senate, Biden would not answer whether he would agree with the plan.

“Whatever position I take on that, that will become the issue,” Biden said. “The issue is, the American people should speak. You should go out and vote. You're in voting now.”

Trump then pressed Biden to answer the question, Biden responded, "Will you shut up, man?"

Trump was pressed by moderator Chris Wallace to explain how he would replace the Affordable Care Act if given a second term. Trump has been trying to get the remaining provisions of the act revoked in federal court after getting the individual mandate struck down.

Trump signed an executive order in July to offer Medicare prescription drug rebates. The effects of that rebate are too early to tell.

“I'm cutting drug prices into going,” Trump said, "which no president has encouraged to do because you are going against big pharma. At the prices, they will be coming down 80 to 90%. You could have done it during your 47 year period in government, but you didn't do it. Nobody has done it.”

“He has no plan for healthcare,” Biden responded. “He sends out wishful thinking. He has executive orders that have no power. He hasn't lowered drug costs for anybody. He has been promising the plan since he got elected. He has none, almost like everything else he talks about. He does not have a plan.”

While Biden said he would accept the results of the upcoming election once the votes are counted, Trump would not make the same declaration.

Trump said that the Supreme Court might need to be involved with the election.

“ I think I'm counting on them to look at the ballots, definitely. I don't think, well, I hope we don't need them in terms of the election itself, but for the ballots, I think so," Trump said.