At sea, first-in-class Ford is hitting its stride

Ford is 70% complete with current trials 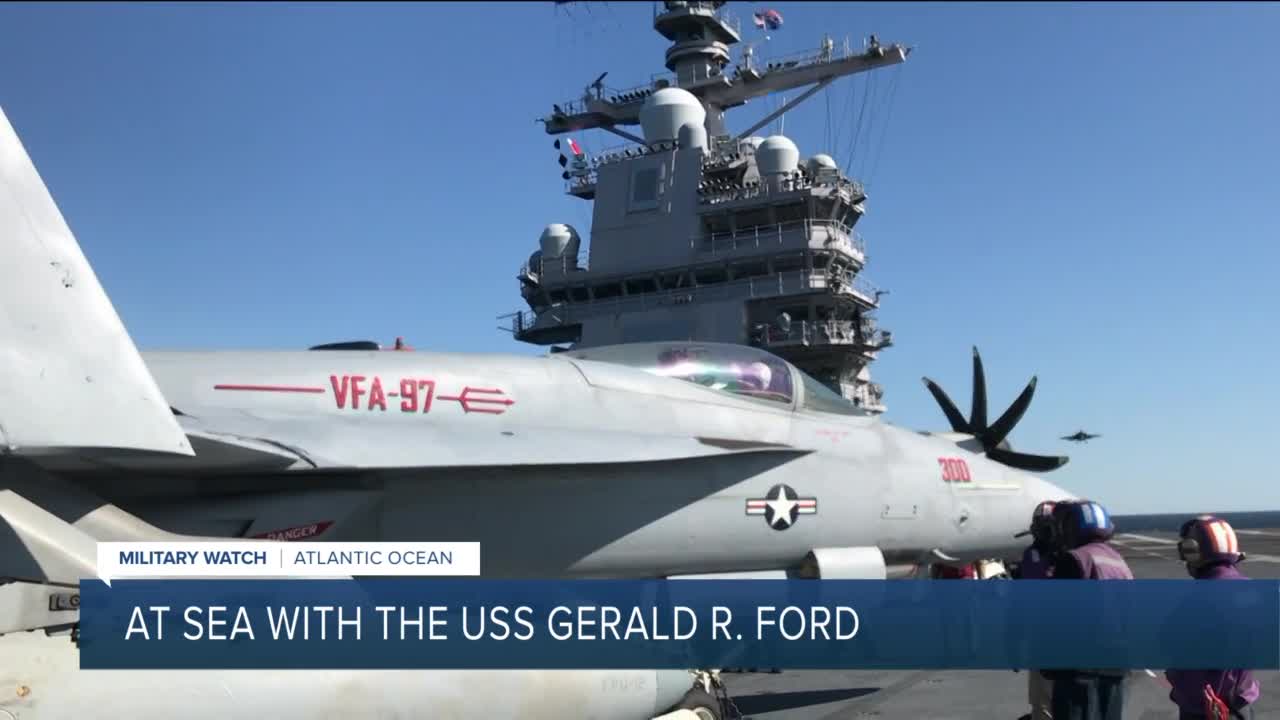 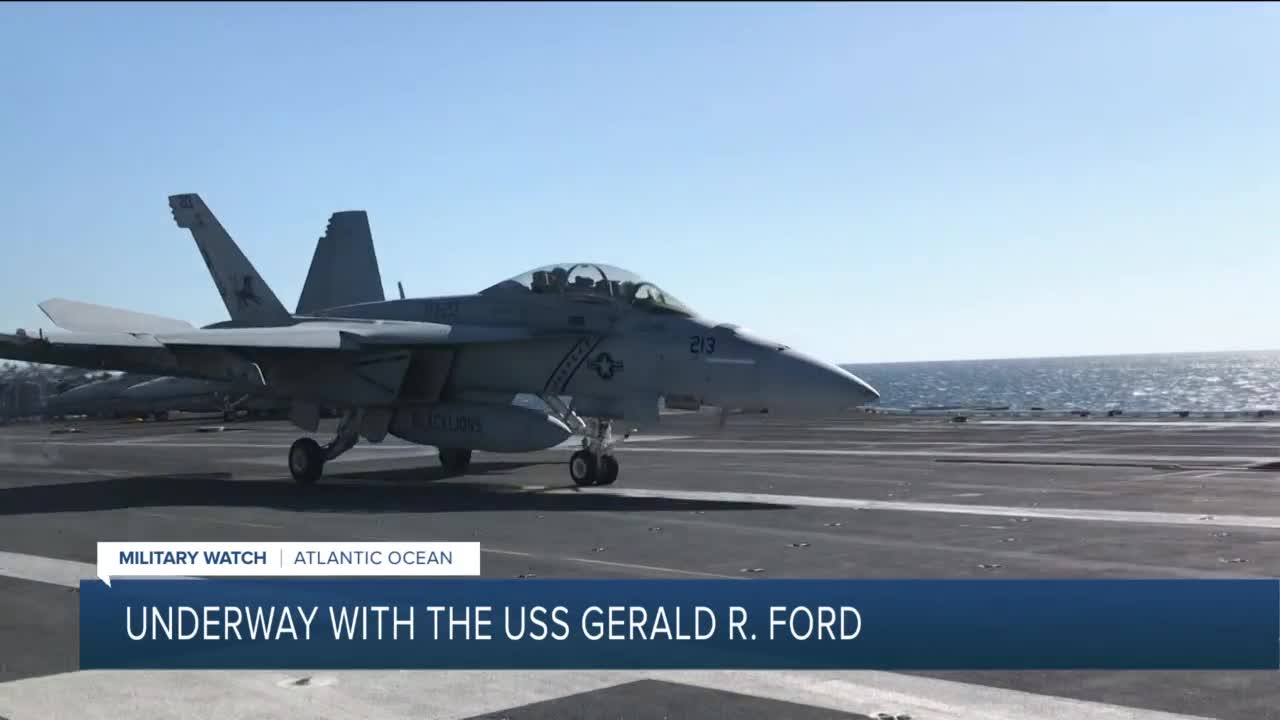 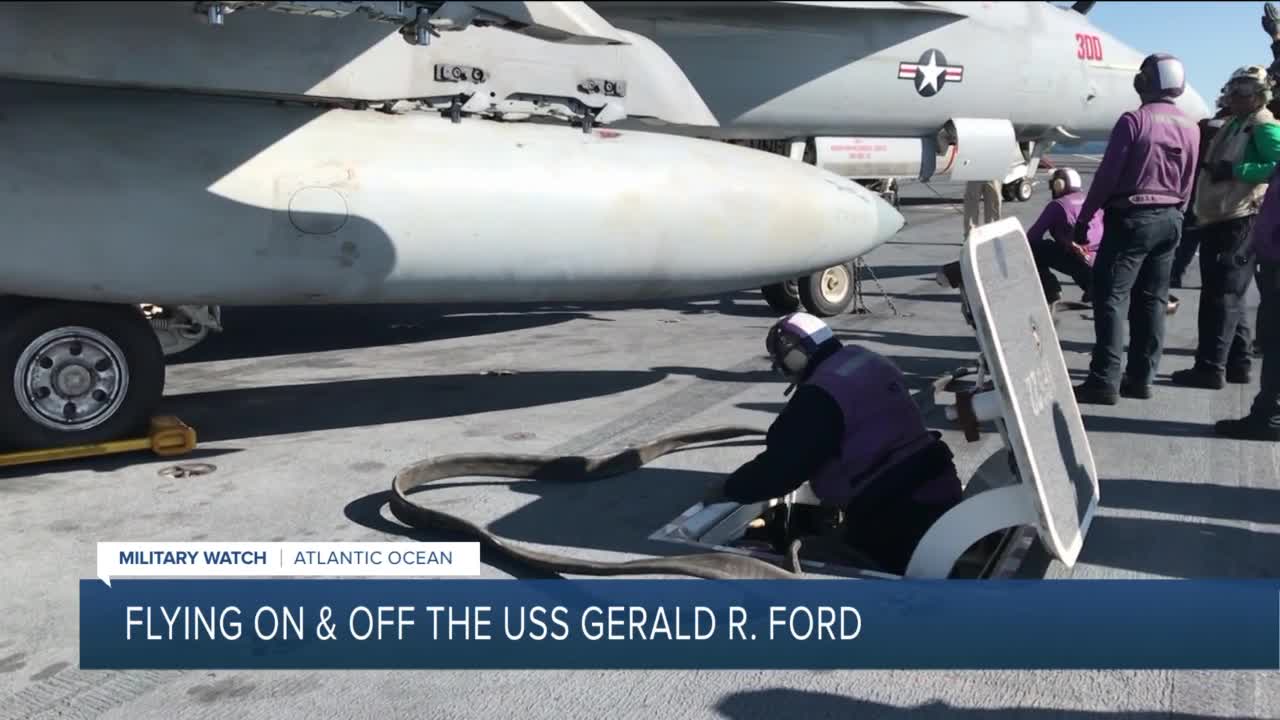 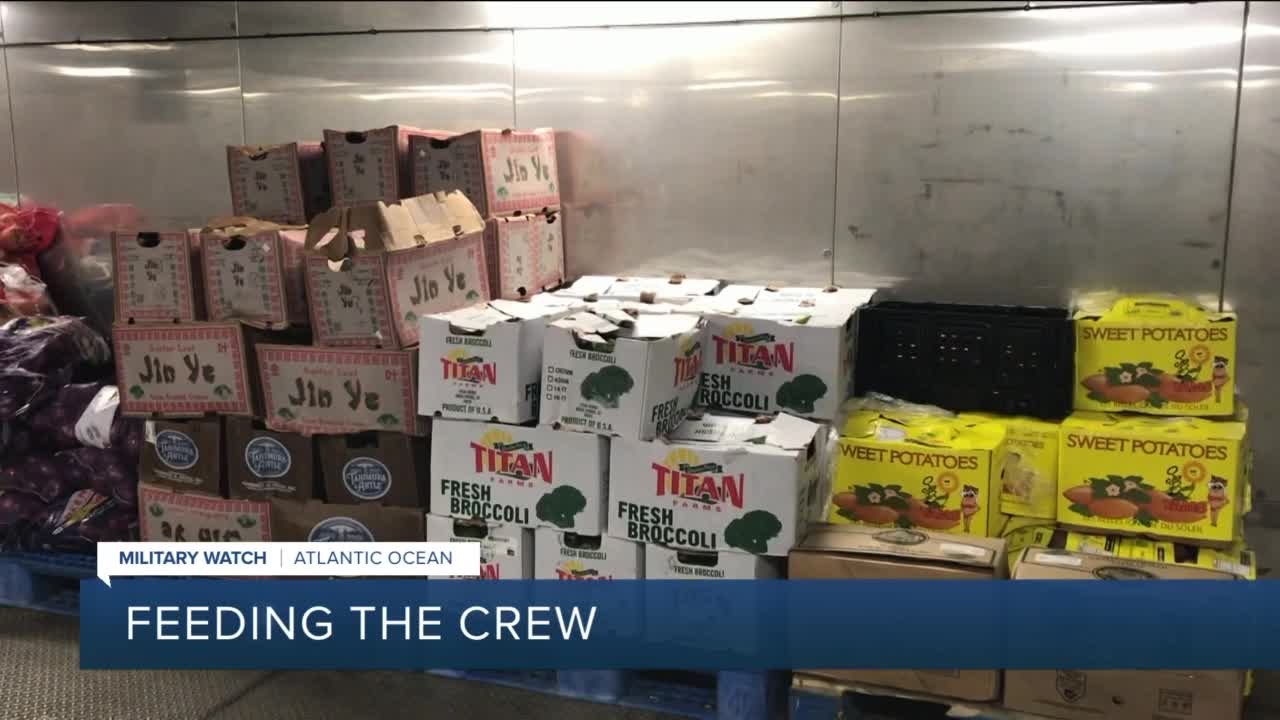 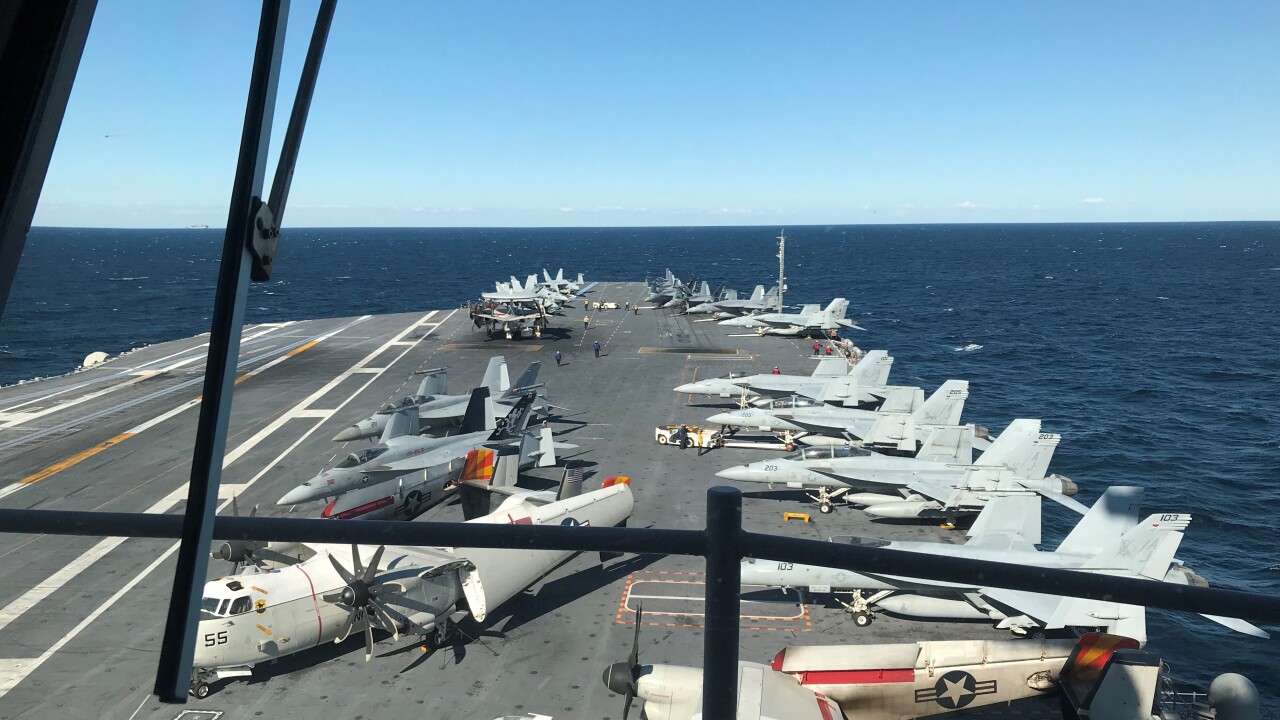 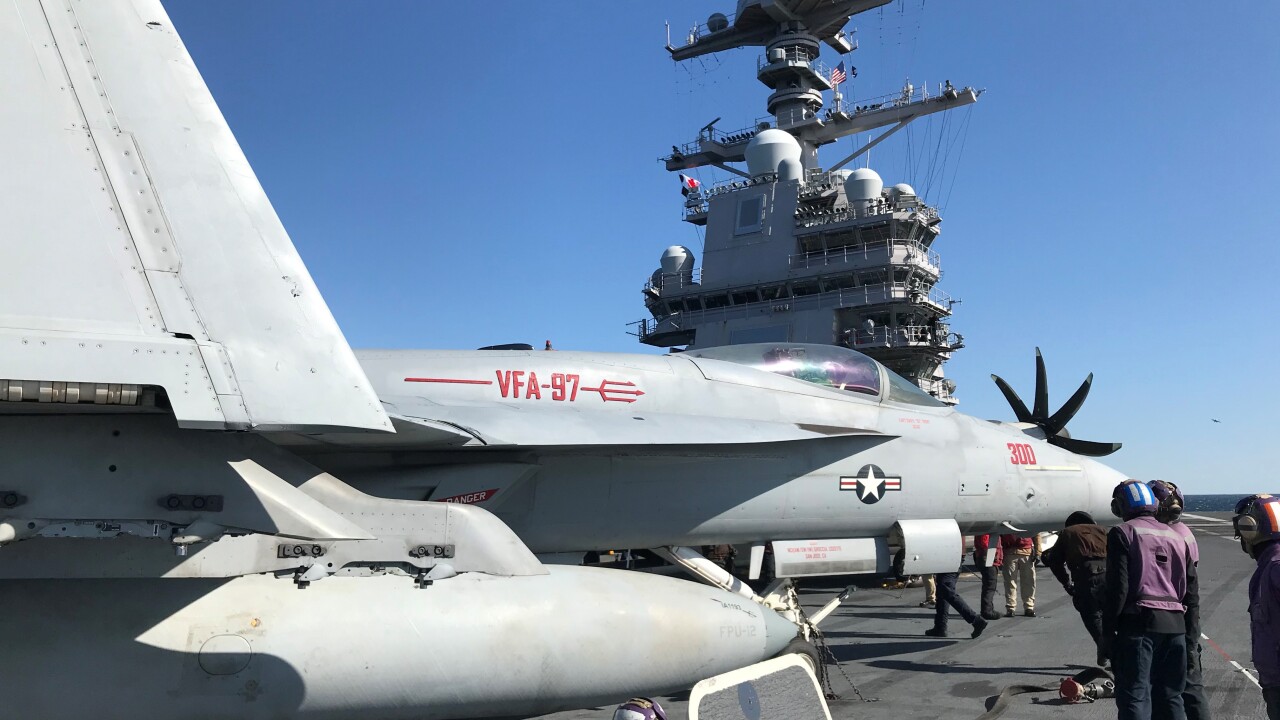 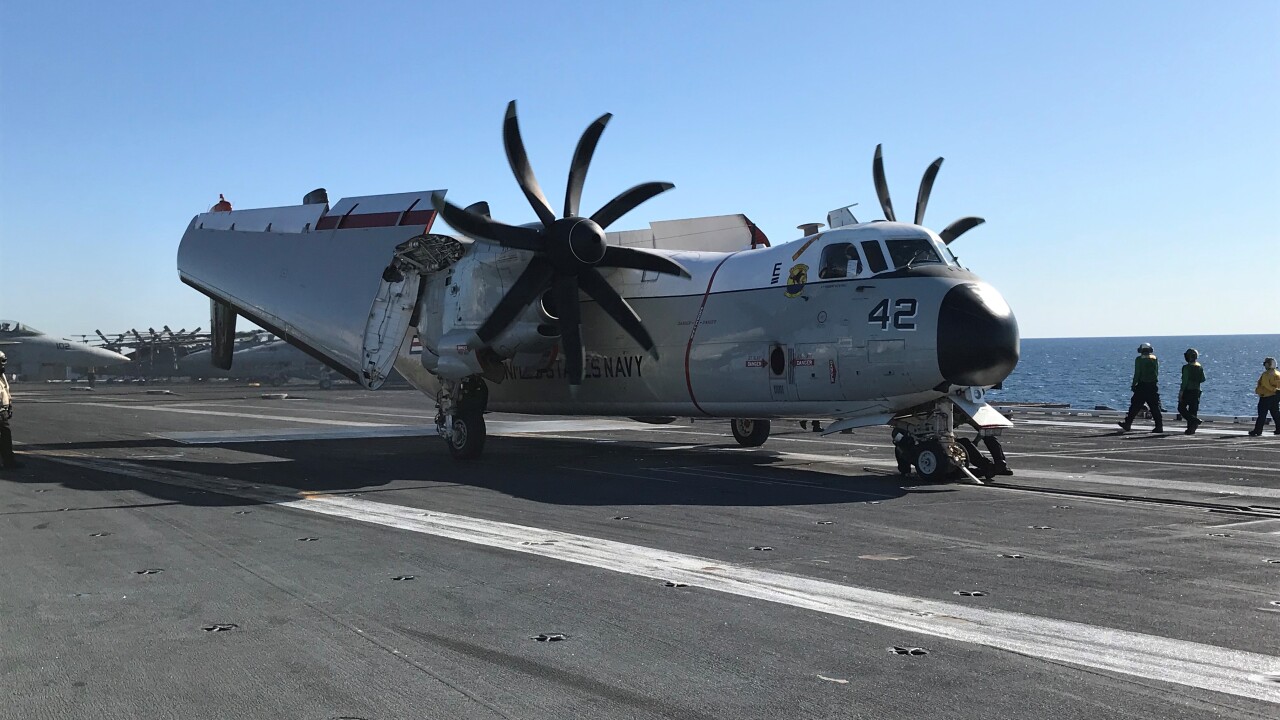 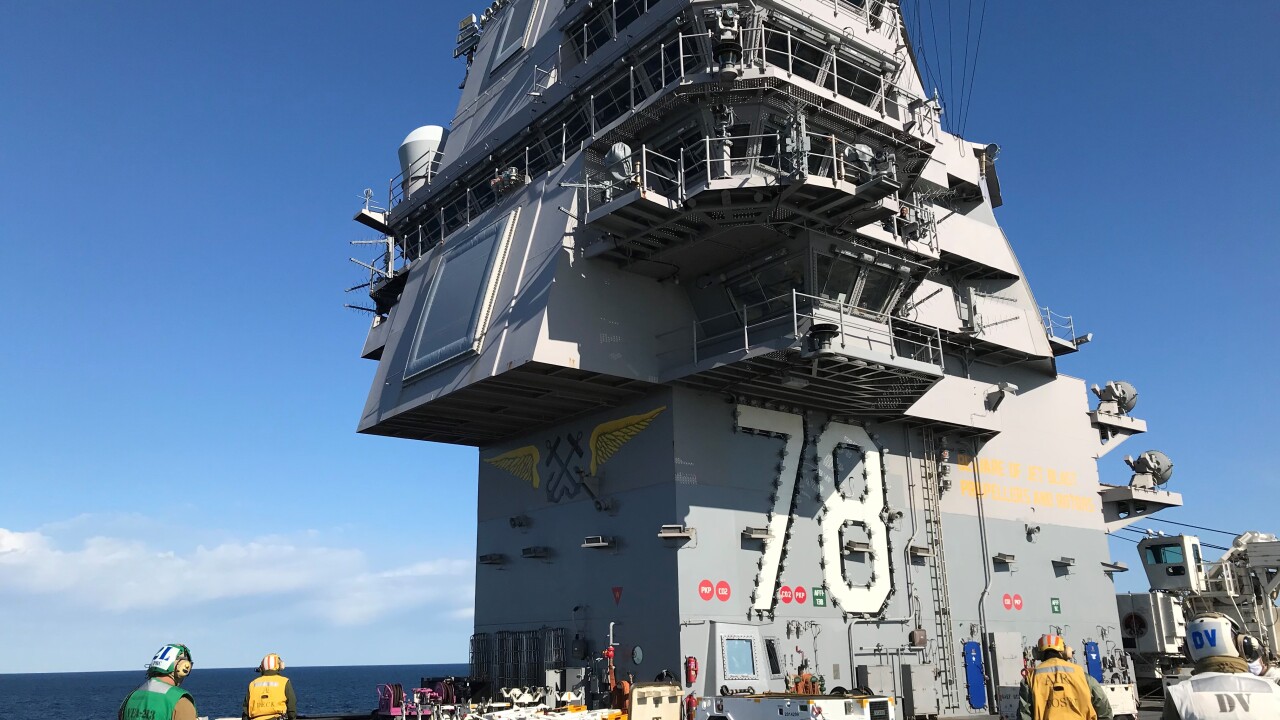 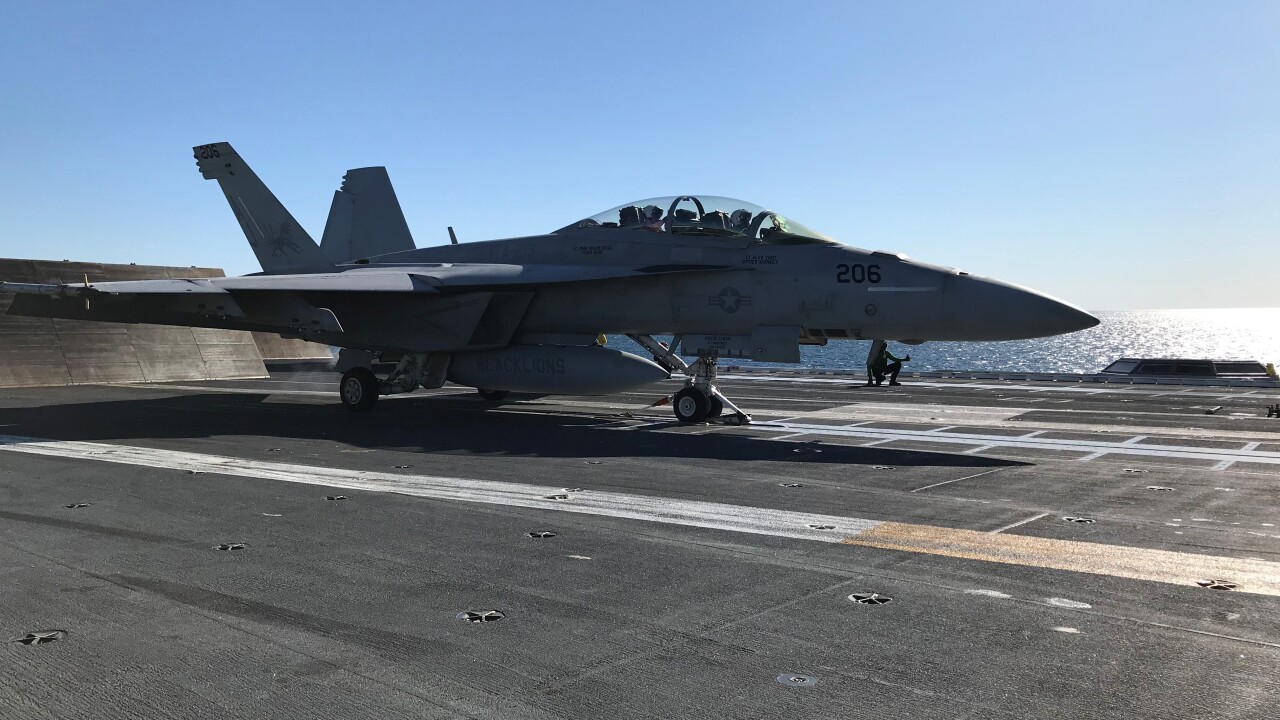 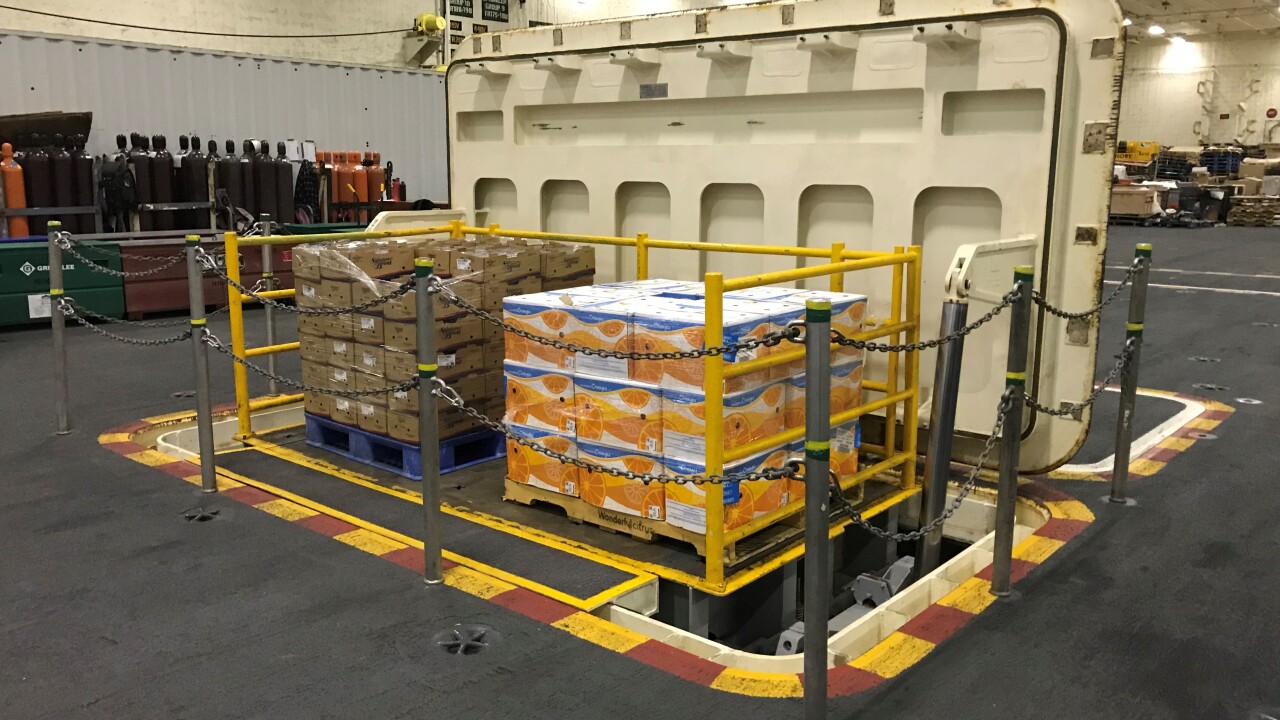 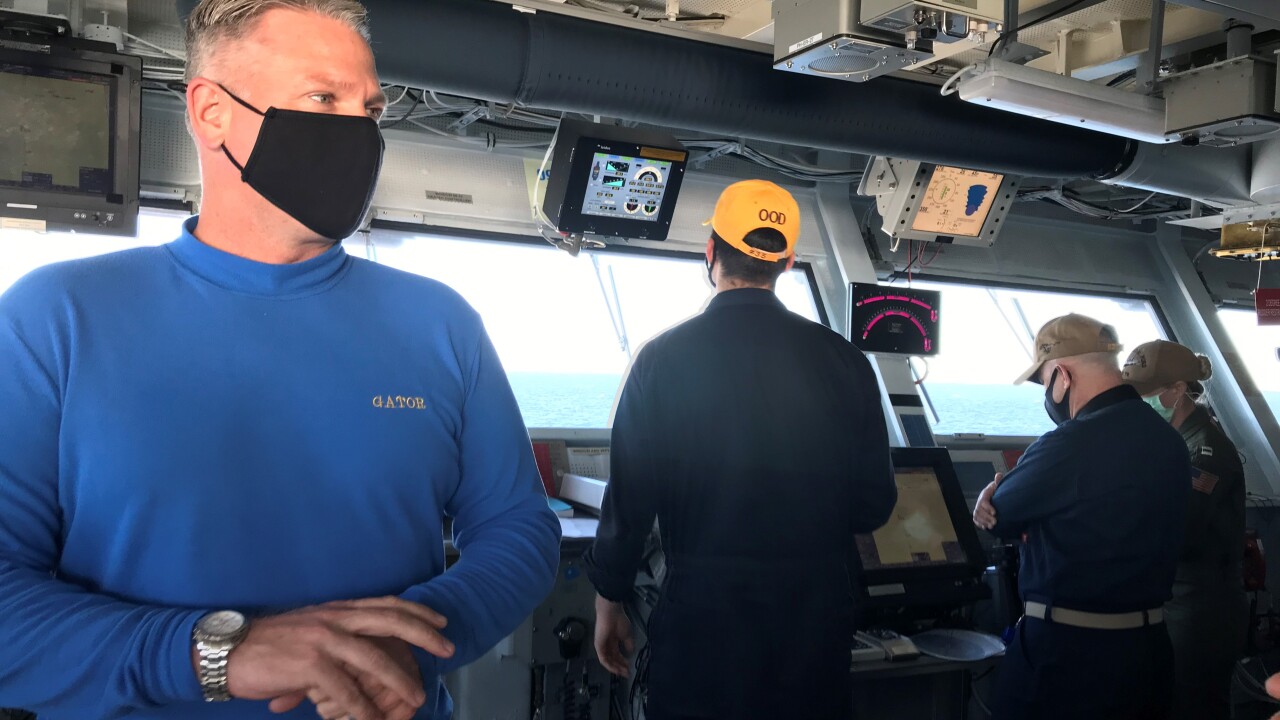 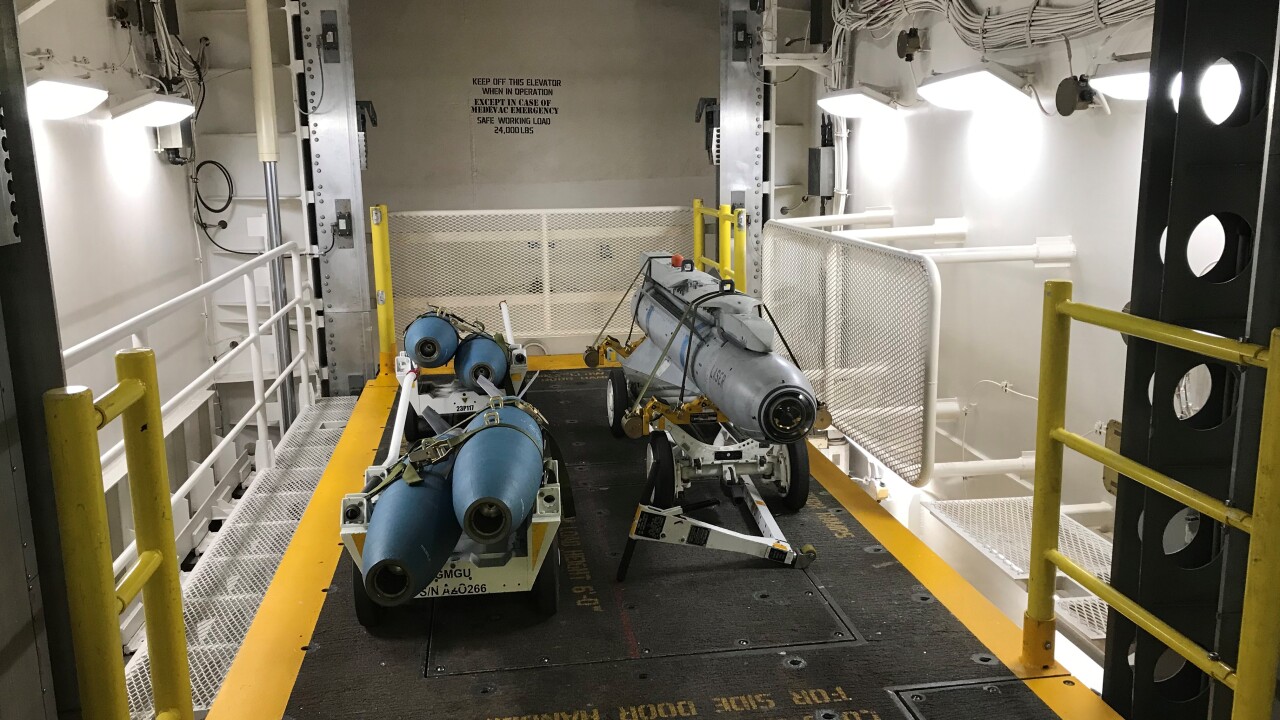 ATLANTIC OCEAN – There is a sense of excitement on the USS Gerald R. Ford these days at the first-in-class aircraft carrier takes on more evolutions and operations at sea.

Top Navy leaders say the Ford is starting to shake years of development issues and is now ahead of schedule in some areas.

Since then, the carrier has been in the Post-Delivery Test and Trials (PDT&T) period, which is now 70% complete.

With underway phases on the ship going well, the Ford has started doing some command and control exercises that were not initially planned for the PDT&T period.

This week, the Navy invited News 3 anchor Todd Corillo to embark on the Ford at sea to witness flight operations and see first-hand the progress the crew has made.

“This week you’re starting to see a little bit of an increase in complexity and full spectrum operations – air defense exercises, maritime strike exercises, straight transit exercises, under submarine warfare exercises, and combat search and rescue exercises. All that going on essentially simultaneously with this test and evaluation period for the carrier,” Clapperton added.

The hope, Clapperton said, is to make the carrier ready earlier and operationalize the strike group.

For most of the year, the Ford has focused on carrier qualifications for aviators after the ship completed Flight Deck Certification and Carrier Air Traffic Control Center Certification in March.

Of the six East Coast based carriers, three are in shipyard maintenance availabilities, another is preparing to enter the yards, and another is working up to deploy, leaving Ford as the only carrier available to conduct carrier qualifications for pilots.

Already this year the Ford has qualified just more than 200 aviators.

On Tuesday, the carrier mimicked a launch and recovery cycle of an air wing on deployment.

The new Electromagnetic Aircraft Launch System can send a jet flying off the deck going zero to 160 miles per hour in 2.5 seconds. On the flip side, the Ford’s new Advanced Arresting Gear can bring a jet going 100 miles per hour to a screeching halt in 300 feet.

So far, the Ford has made 5,200 traps and catapults using the new systems.

With the integrated island in a different position, there’s more real estate to work with on the flight deck.

Pilots say that aspect is noticeable and appreciated, but the act of landing and launching is nearly identical that on a Nimitz-class carrier.

“There’s more area for F-18s to move around. The upper stage weapons elevators and the fuel lines in the flight deck, those things don’t exist on Nimitz class. I think that’s going to be a big deal for us. Actually launching and landing is almost transparent. There’s slight differences, but once you do it once, compared to the Nimitz class it’s absolutely transparent,” Strike Fighter Squadron (VFA) 213 Lieutenant Commander Kyle Terwilliger told Corillo.

Much of what the Ford crew is doing during underway periods is focused on figuring out the multiple new systems, what works and what needs to be changed. Those lessons are immediately being implemented in the construction of future Ford-class carriers, including CVN-79, the John F. Kennedy.

"Anytime you have that much innovation going on at the same time, there's going to be some growing pains. But after 28 months onboard the ship, I can say that our crew has been willing to take those challenges and pass recommendations up. They recognize that for the 50-ish year lifespan that these ships can serve our nation, that they're making an impact today," Lieutenant Commander Tyler Dunn, and Officer of the Deck on Ford, told Corillo.

Another focus is figuring out how a Ford-class strike group should operate.

“What we really are trying to figure out is what are some of the things that are going to be different with a Ford strike group,” Rear Admiral Clapperton stressed.

“Very few of us will make it to the first deployment. We are preparing the ship for the future. We are getting our ship ready for this ship to go over the horizon and do the dangerous work of our nation,” added Captain J.J. Cummings, Commanding Officer of the Ford.

All of this is happening as the Ford crew deals with the added challenge of operations during the COVID-19 pandemic.

Across the ship, signs encourage and mandate social distancing, Sailors are always wearing masks, the mess galleys are operating on food takeaway only, and some of the fitness options have been curtailed.

Efforts have also extended to stepped up expectations for the crew when the ship is in port.

“We’ve had to ask them to do a lot in terms of personal liberty and being more restrictive than maybe the citizens around Hampton Roads. We’ve even had to ask families ‘hey when your Sailor comes home, when I come home, honey, I need you to be healthy' so that I can get back on Ford and keep qualifying the next generation of Naval aviators,” Lieutenant Commander Dunn shared.

Meantime, work is progressing on the Advanced Weapons Elevators, with six of the 11 elevators now certified.

Unlike the Nimitz-class carriers which use cables for movement, the Ford-class elevators are using electromagnetic motors, which the Navy says allows for greater capacity and movement of weapons.

“On this ship, because of the way our weapons magazines are aligned, and our elevators are situated, we’ve reduced by 75% bomb travels from berth to roof, so incredible efficient movement of weapons from magazine build up to the flight deck,” Captain Cummings noted.

The Ford has already completed 12,000 cycles with the elevators that have been turned over to the ship. The rest of the elevators are expected to be certified before shock trials next year.

Those mandated shock trials, where live explosives are set-off near the carrier, are currently set for May through August 2021.

Following shock trials, the Ford is then set to enter another six-month maintenance period in September, before the ship would look ahead and begin preparing for its first deployment.