Everyone safely cleared the water, and the shark appeared uninjured as it swam away. 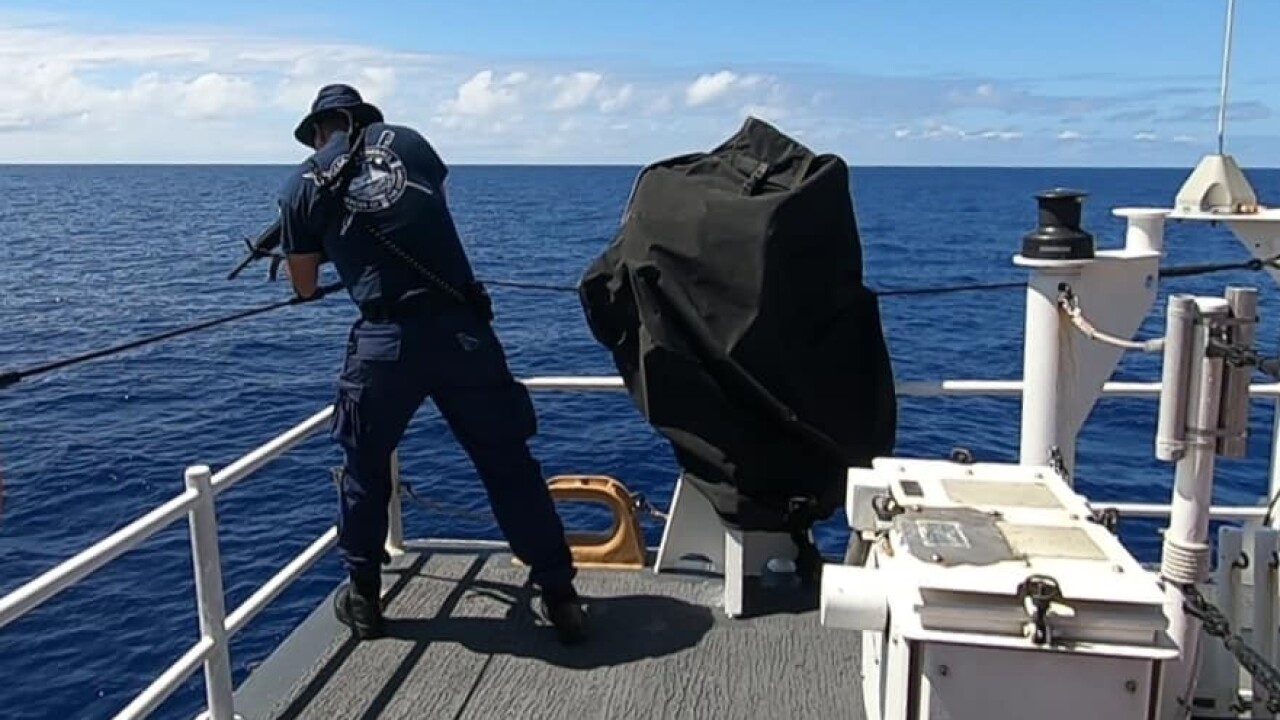 Coast Guard crews encountered a shark during a swim break while patrolling Oceania on August 21.

Reports say Petty Officer 1st Class Samuel Cintron, a maritime enforcement specialist aboard the Coast Guard Cutter Kimball, fired shots at the 6-8' shark that surfaced and swam toward Kimball crewmembers in the water.

Cintron was standing shark watch during the cutter's swim break when the shark surfaced and got close to the nearly 40 crewmembers swimming, fortunately reports say everyone safely cleared the water, and the shark appeared uninjured as it swam away.

On Thursday, the U.S. Coast Guard Cutter Kimball Facebook page posted more details on the event and shared a video where you can hear the shots being fired into the water.

After completing our operations for the day, there were no vessels around for miles, the weather was perfect, and we were a zillion miles from land. We had not been off the ship for weeks, were at that point where every day feels like "Groundhog Day," and were looking for something to break up the monotony.
Answer: Swim Call!
We had a fully vetted and tested plan we've used before, conducted safety briefs, established communications between the various stations, launched our small boat with extra crew and a dressed out swimmer and stationed it 50 yards off the ship, set an armed shark watch, opened and manned the Rescue Station, and put an accountability system in place.
Everything was by the numbers.
Everyone was having a great day.
Everyone was smiling and having fun.
It was perfect!
And then...
Bridge personnel reported "Shark!" over the radio.
As if right out of a Hollywood movie, a 6-8 foot shark (no exaggeration) surfaced at the Rescue Door and was swimming toward 30-40 people in the water about 30 feet away. Everyone on the Flight Deck had a bird's eye view. A review of video shot by a crew member reveals it was likely a Long-Fin Mako or Pelagic Thresher Shark - not something to mess with!
ME1 Cintron, our shark watch, was on the Flight Deck and immediately locked on target...literally!   
Our animal-lover Chief who wants to save every animal she finds yelled "Shoot it!"
While some crew went for the Jacob's ladder on the Fantail, others went for the open stern notch at the ship’s stern, and a large group swam for the small boat.
ME1 Cintron fired a well-aimed burst right at/on top of the shark to protect shipmates just feet away. It turned away for a few seconds then turned back. We kept directing people out of the water while keeping a clear line of sight on the shark. ME1 fired bursts as needed to keep the shark from his shipmates with amazing accuracy. The shark would wave off with each burst but kept coming back toward our shipmates.
It wasn't the panic of the 4th of July scene from JAWS, but once everyone realized what was happening, they moved with a purpose! Everyone stayed focused and worked the problem. The small boat quickly looked like a vessel overloaded with SAR survivors. Others threw heaving lines to shipmates in the water and helped them aboard via the stern notch.
All hands are safe and accounted for. We even saved the inflatable unicorn!
The only injury was a small scrape OS3 Berk suffered while climbing aboard. Our hyper vigilant HSC didn't even deem it worth a band aid. But where was it located you ask? On his knee....in the center of a tattoo. What tattoo you ask? An open set of shark's teeth. Seriously, you can't make this up!
We have hundreds of years at sea between all of us and no one has seen or heard of a shark actually showing up during a swim call. This goes to show why we prepare for any and everything. We just didn’t think it would be a swim call shark attack!
BRAVO ZULU to ME1 Cintron who likely saved one or more of his shipmates from a shark attack!! Many others helped, such as the entire Boat Crew. It was a team effort with everyone doing their part to work the problem.
Also,...
As the CG's new SMEs on the matter, we are writing new Shark Watch & Response Tactics.
We shifted to fish call for the afternoon.
The crew’s top requests for movies on the Flight Deck that night were “JAWS” followed by “Sharknado” (seriously).
The shark is definitely making the Patrol t-shirt.
This is a sea story each of us will be retelling for YEARS!!!

The post also emphasized that the member's goal was to keep the shark from shipmates, not harm it if possible. They say the shark was most likely curious and not looking for a meal.

"We picked our location to try and avoid such an encounter but it is their ocean after all. It later joined a few smaller buddies that showed up and they swam off together," the post said.