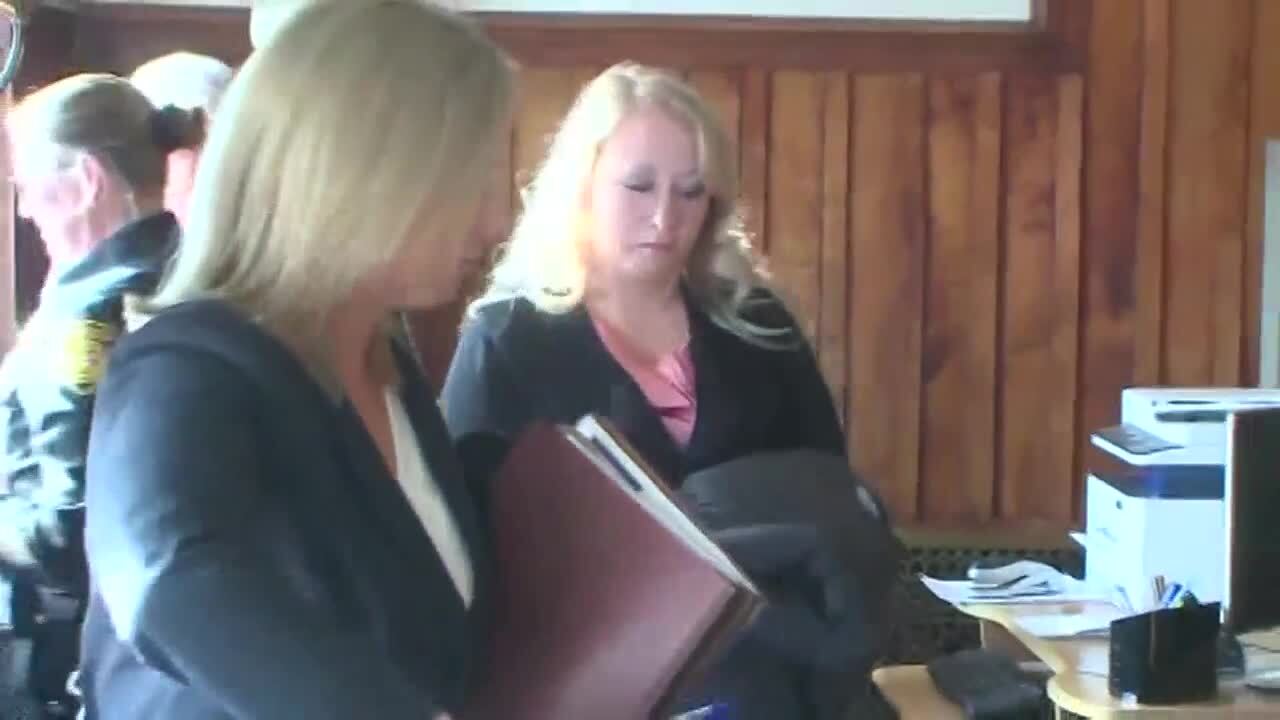 TELLER COUNTY, Colo. — Minutes before she was sentenced Tuesday morning, Krystal Lee Kenney stood in front of the court and listed out apologies.

"I'm sorry that I did not save Kelsey," she said through tears.

Just before 11 a.m. local time, Judge Scott Sells made the decision on her sentence.

"Simply saying I'm sorry is not enough," he said.

Kenney was sentenced to three years in prison, followed by one year of mandatory parole.

Kenney, 33, had an intimate relationship with Patrick Frazee, the man who was found guilty in November 2019 of murdering Berreth, who was his fiancée, on Thanksgiving Day 2018. As part of a plea deal with prosecutors, she pleaded guilty to tampering with physical evidence and agreed to testify at Frazee's murder trial.

Following the murder in Woodland Park, Kenney said she obeyed Frazee's commands to take Berreth's cell phone and drive back home. He also asked for her to text Berreth's mother and Frazee from the cell phone to try to confuse investigators, she said. During Frazee's murder trial in November, she testified that she burned Berreth's phone and purse at her home in Idaho, put the ashes in a box, put the box in a plastic bag and dumped it in a trash bin on her way to work.

Less than a month later, authorities caught on.

Details behind the plea deal

On Dec. 17, 2018, Colorado Bureau of Investigation agents, along with the FBI, visited Kenney's home in Idaho. At the time, authorities suspected she had some involvement in Frazee's then-alleged murder of Berreth. They suspected that Kenney may have disposed of Berreth's cell phone sometime in the days after Thanksgiving when Berreth went missing from her Woodland Park home.

Kenney told the authorities she wanted to speak with her attorney before talking with the investigators, but would cooperate with them.

During Frazee's trial, she told the courtroom that she felt she could talk freely because she finally "felt safe" from Frazee. She obtained an attorney a few days later on Dec. 20, 2018.

The following day, Frazee was arrested at his home in Florissant.

In February 2019, prosecutors offered Kenney a plea deal: plead guilty to tampering with physical evidence and agree to truthfully testify in Frazee's trial. She agreed.

An arrest affidavit was released later in February, which featured details Kenney provided to investigators about the crime.

During Frazee's murder trial in November, Kenney spent significant time on the witness stand describing her long-time tumultuous relationship with Frazee, his multiple plans to kill Berreth and his demands to clean the scene and use cell phones to attempt to confuse authorities after the murder.

Throughout the trial, she admitted to not alerting authorities, even as Frazee detailed the multiple ways he had planned to murder Berreth. She also admitted to not telling anybody about the murder afterward.

It was only after she had signed the plea agreement that she gave a formal statement to investigators and prosecutors, spilling all of the details she knew.

Kenney took to the witness stand for the first time in the Frazee trial on Nov. 6. She recounted the plot, the cleanup at Berreth's home and Frazee's account of the murder afterward. As she explained the entire story and how Frazee manipulated her, she broke down multiple times and cried.

She first gave a brief description of her relationship with Frazee: They met at the Teller County Fair in 2006 and their relationship began shortly afterward before ending in August 2007. After Kenney married her fiancé in 2010, she and Frazee started an affair in 2015. Kenney filed for divorce the following year. Kenney then became pregnant with Frazee's child and had an abortion in 2016, and they stopped talking shortly after, Kenney testified.

The relationship picked up again in the middle of 2018 when Frazee and Berreth were engaged. Kenney said she noticed that Frazee started referring to Berreth only as "the mother of my child" and not her actual name. Frazee told Kenney that Berreth was abusing their daughter, who was 1 year old at the time, Kenney testified.

Frazee claimed that to save his daughter, he had to get rid of Berreth. In October 2018, he suggested spiking a coffee with a drug cocktail to poison Berreth. He asked for Kenney to bring the coffee to Berreth and make up an excuse to give it to her. Kenney said she bought a coffee from a local store but didn't spike it. Still, she brought it to Berreth's home and claimed that she wanted to thank Berreth for helping grab her loose dogs. Berreth was guarded during the interaction, Kenney testified.

When Frazee called Kenney the next morning asking what had happened, Kenney said Berreth must not have drunk the coffee.

Frazee created a second plan shortly afterward in October. By this time, Kenney started to believe that Frazee was lying about Berreth abusing their child.

Frazee told Kenney to use a metal pipe to hit Berreth on the back of her head, Kenney testified. She brought the pipe to Berreth's home and opened the car door. She heard a dog bark though, so she left the house.

The next day, she told Frazee that she had backed out of that plan.

Frazee constructed one last murder plan for Kenney. The weapon this time was a baseball bat.

Kenney said she took the bat and sat on the ground outside Berreth's home before leaving.

In court in November, she said she feared "it was going to be her or me."

On Thanksgiving Day 2018, Frazee called and texted her several times and seemed rattled, Kenney said in court. She was with family and did not respond until later that day when he told her that she had a mess to clean up in Woodland Park and wanted to know how soon Kenney could get to Colorado. She said at that point, she believed Frazee had killed Berreth, or he was setting Kenney up to do so.

She arrived in Woodland Park early in the morning on Nov. 24 and walked into Berreth's home to find "a lot of blood" on the floor and walls, she testified. It was mostly dry.

"It wasn't like a can of paint thrown on the wall," she said in court. "It was like if you took a paintbrush and flicked paint on the wall."

She spent four hours cleaning the home, she said, before grabbing lunch at a Sonic for Frazee and his daughter. She said he asked if she cleaned the place well, and she said she did the best she could, to which he responded, "You better hope you did because our lives depend on it."

He then described how on Thanksgiving Day, he had told Berreth to guess the scent of a candle while blindfolded before he struck her with a bat, killing her in her living room. Their daughter was in a back room at the time. He said he put her body in a black tote and drove it to a ranch, where he put the tote on top of a haystack, Kenney testified.

On Nov. 25, three days after the murder, Frazee and Kenney retrieved the tote and brought it to his home in Florissant. Kenney watched as Frazee moved the tote into a trough, poured motor oil on it and set it on fire, she said.

Frazee then instructed Kenney to take Berreth's phone with her home and to text Berreth's mother and Frazee along the way. Kenney complied before destroying the phone in her backyard, she testified.

In the days afterward, Kenney said she was scared that if she didn't continue to hide the situation from authorities, Frazee would do something to her or her family.

She finally brought her story to the light after investigators reached out wanting to talk about the case with her in mid-December.

The defense questioned why Kenney never alerted authorities or anybody else to Frazee's murder plot, despite having multiple opportunities to do so.

The defense also pointed out that Kenney had testified that she wanted to come forward because Berreth's family deserved to know what happened to her, yet she never notified the family of what she knew between Thanksgiving and Dec. 20, 2018.

On Monday, Frazee, who was charged with life in prison without parole plus 156 years in November 2019, filed a notice to appeal his conviction.

He is currently at the Arkansas Valley Correctional Facility in Crowley County.

To date, Berreth's remains have not been located.

This story was originally published by Stephanie Butzer on KMGH in Denver.