FRANKFORT, Ky. — Kentucky Attorney General Daniel Cameron has made a formal request for an investigation of former Kentucky Gov. Matt Bevin's pardons by the FBI.

Cameron confirmed his request to the FBI in response to a Dec. 13 letter from Senate Minority Leader Morgan McGarvey (D-Jefferson) and Rep. Chris Harris (D-Pike).

"While Kentucky's Constitution gives the Governor the power to pardon a person convicted of a crime, I believe the pardon power should be used sparingly and only after great deliberation with due concern for public safety," Cameron's letter said, in part. "After taking office, I discussed this matter with some of our law enforcement partners. After this discussion, I decided to send a formal request to the Federal Bureau of Investigation (FBI) to investigate this matter."

Bevin has come under fire for having issued hundreds of pardons and commutations since losing his re-election bid last month. Among those pardoned was Patrick Baker, who was convicted of homicide and other crimes whose brother ran a political fundraiser for Bevin in 2018, according to the Courier Journal .

Bevin insisted during a radio appearance last month he pardoned Baker because he believes he is innocent.

"The facts should matter, and we deserve justice every time there has been a wrong done, not only for the victims but society as whole," he said. "But the only thing more unjust than not punishing a perpetrator is punishing an innocent person for something they did not do."

Bevin also pardoned Micah Schoettle, who was convicted of rape, sodomy and sexual abuse of child. Schoettle walked free after serving 18 months of a 23-year sentence.

In his December radio appearance, Bevin called child rapists "the scum of the earth," but claims there was no evidence that Schoettle was guilty.

"If you have been repeatedly sexually violated as a small child by an adult, there are going to be repercussions of that physically and medically. There was zero evidence of that," Bevin said. "This man was convicted purely on something that there's no corroboration for." 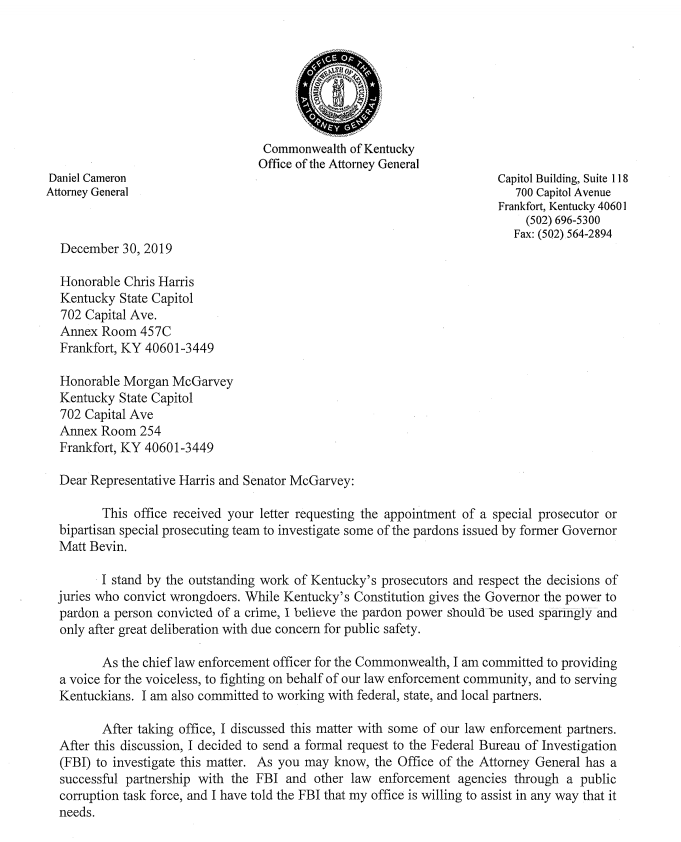 This story was originally published by Sierra McLean on WLEX in Lexington, Kentucky.