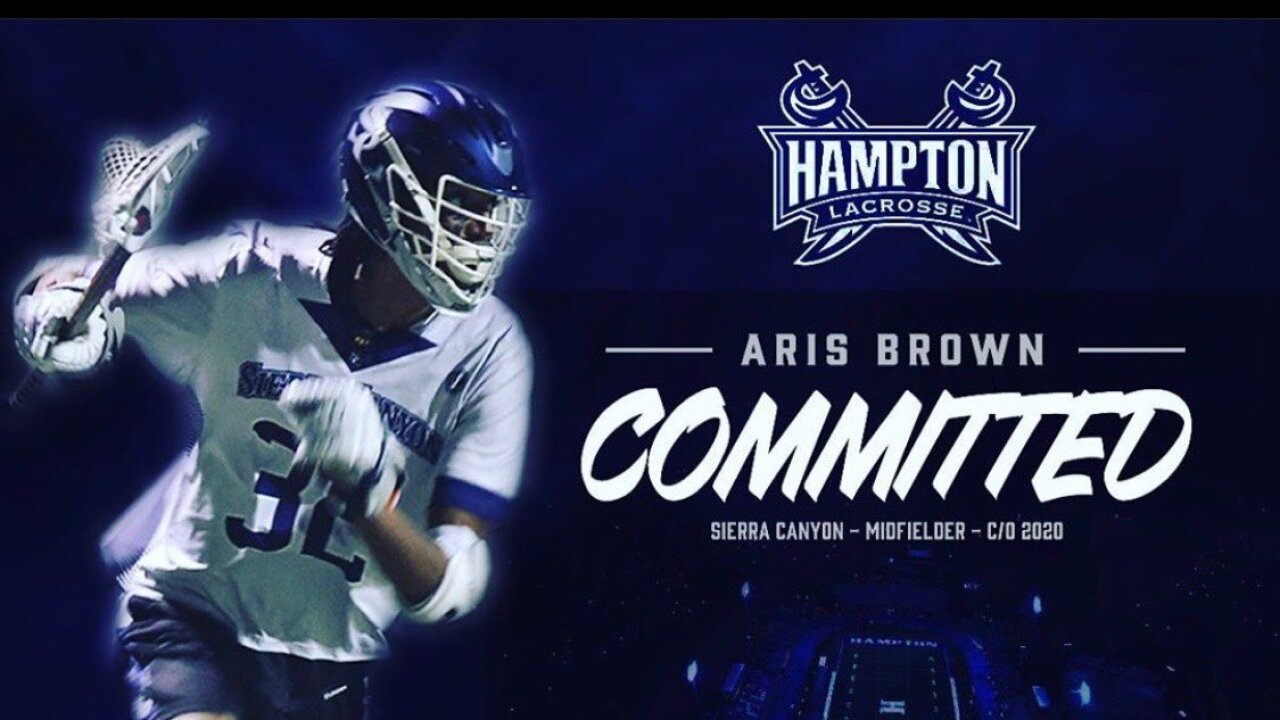 “It is my pleasure to welcome Aris Brown to our ‘Home by The Sea,’” said Hampton University President, Dr. William R. Harvey. “His presence and athletic ability will be a welcomed addition to our Division I Lacrosse program.”

Aris Brown was a four-year starter, helping his team to three consecutive Gold Coast League titles as a midfielder for Sierra Canyon High School. He is 6’4, 180 pounds and is the 15th addition to Hampton’s 2020 class.

“I really liked the school as a whole and wanted to play competitive lacrosse with kids that look like me and make some history,” Brown told Lacrosse Bucket. “My dad has influenced my athletic career by giving me things to work on when he watches me play,” Brown said. “No matter how well I play, there’s always something that he thinks I can improve on. I’m very grateful for it though, and how it’s helped me throughout high school.”

Aris’ father, NFL Hall of Famer, Jim Brown, started his lacrosse career at Manhasset High School in New York. During his high school playing days, he earned All-Star honors for midfield. Brown went on to Syracuse University, where he lettered in four sports including lacrosse and football. While at Syracuse, Brown achieved many awards, including: Athlete of the Year in 1956-57, Team All-American Selection in 1956, and earned First Team Honors in 1957. He went on to play in the National Football League for the Cleveland Browns. He was elected into the Pro Football Hall of Fame in 1971, and into the Lacrosse Hall of Fame in 1983.

Jim Brown helped evolve the sport, and put lacrosse into the main-stream in the 1950’s. There is no question that Brown was one incredible athlete. Many have argued that he is the best lacrosse player to have ever graced the game.

On Saturday, Feb. 13, 2015, as part of ESPN’s SportsCenter on the Road series broadcast from Armstrong Stadium, Jim Brown spoke to the significance of Hampton University sponsoring a Div. I team. “The big picture is that African Americans should participate in everything,” Brown said. “Hampton is exploring and educating and offering opportunities that is off the beaten path. That starts with lacrosse and where it ends nobody knowns because there are so many things that the African American community have not had an opportunity to participate in. If lacrosse can be one that opens the doors, then I’m all for it. Hoo-ray Hampton! Keep it up!!”

“We are very excited to welcome Aris Brown to the Hampton University community,” said Rashad Devoe, Hampton University Men’s Lacrosse Head Coach. “He is a tough, two-way midfielder that is very versatile, and his leadership is something we are looking for to keep us going in the right direction. Aris is so unbelievably humble, and just a great young man of integrity. He shows all the characteristics of a Hampton Man at such a young age.”

“Aris has handled the spotlight so graciously, as I am sure he has had some great guidance from his father, the National Lacrosse Hall of Famer and NFL Hall of Famer Mr. Jim Brown, along with his mother Mrs. Monique Brown. Working with them through this process has been an absolute joy. We are elated to welcome the Brown Family to their ‘Home By The Sea,’” Devoe added.