Like Margot's steal attempt, Rays come up short in Game 5 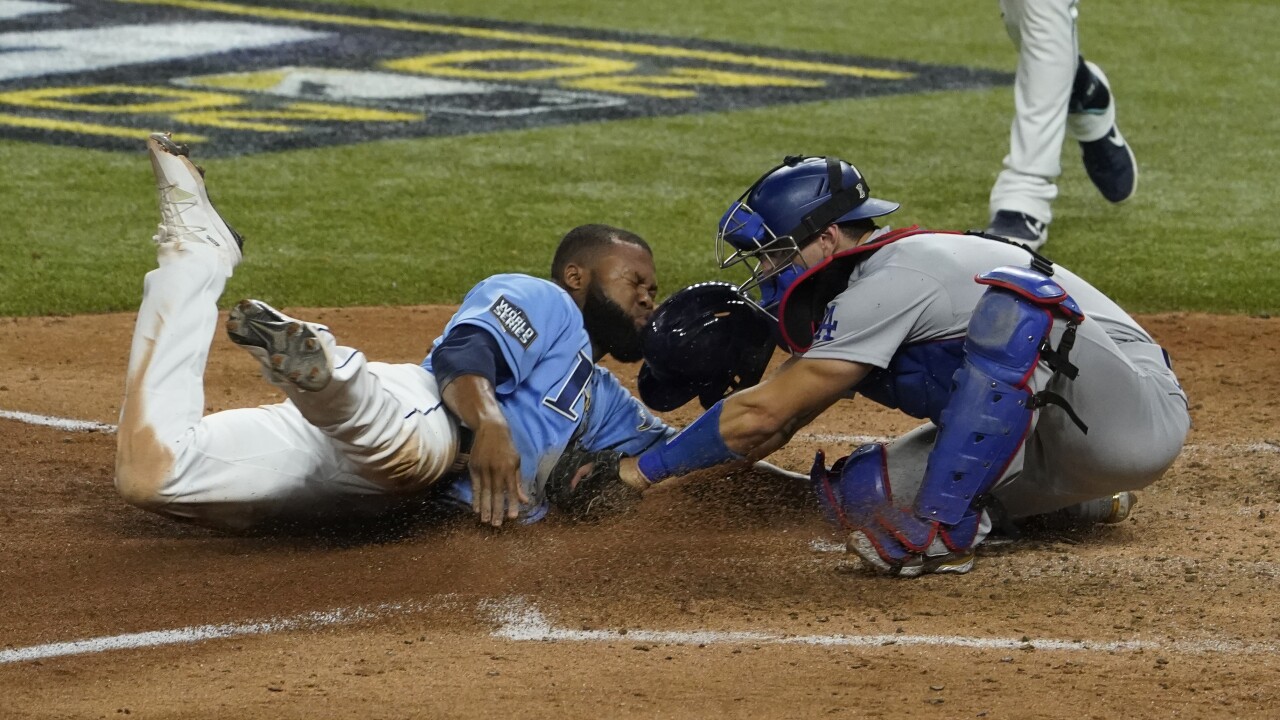 ARLINGTON, Texas (AP) — Manuel Margot snuck a few steps down the line and took off toward home plate, trying to steal a run for Tampa Bay.

He came up a little short — just like the rest of the Rays in their attempt to nab Game 5 and go ahead in this World Series.

A night after Tampa Bay’s stunning ninth-inning victory, which ended with Randy Arozarena on his stomach and slapping home plate after scoring the winning run, Margot couldn’t get his hand there before getting tagged out by catcher Austin Barnes.

That inning-ending play in the fourth was the last time the Rays got that close to scoring in a 4-2 loss to the Los Angeles Dodgers on Sunday night that left Tampa Bay in a 3-2 Series deficit.

Needing a win to force a deciding Game 7, the Rays are set to start 2018 AL Cy Young Award winner Blake Snell on Tuesday night. The lefty struck out nine in 4 2/3 innings when the Rays won 6-4 in Game 2 last Wednesday.

Tampa Bay trailed 3-2 against three-time NL Cy Young Award winner Clayton Kershaw when Margot drew a leadoff walk in the fourth. The first-year Rays outfielder stole second base and got a chance for more when Barnes’ throw went off the glove of second baseman Chris Taylor for an error.

When the ball rolled past the infield dirt, Margot hesitated briefly before taking off for third base and sliding headfirst so hard that he went over the top of the base. Third baseman Justin Turner kept his glove against Margot, who slammed his hands on the ground while looking at his teammates in the dugout in front of him when he was called safe.

The Dodgers challenged the call, but it stood after a replay that took more than 1 1/2 minutes, but didn’t show definitively if Margot ever lost contact with the base while being tagged. He was over the top of the bag the entire time.

After Hunter Renfroe walked, the Rays had runners at first and third with no outs before Joey Wendle popped out and Willy Adames struck out. Kevin Kiermaier was at the plate and stepped out of the left-handed batter’s box when Margot broke for home.

Kershaw, who also beat the Rays in Game 1 of the Series, alertly stepped off the rubber after Margot broke and threw to catcher Barnes for the run-saving tag.

Will Smith was the catcher at the end of Saturday night’s game, when he missed the ball when trying to make a sweeping tag on Arozarena. The catcher didn’t realize Arozarena had tumbled to the ground before getting up and eventually diving home.

The Rays weren’t able to get back up in Game 5.