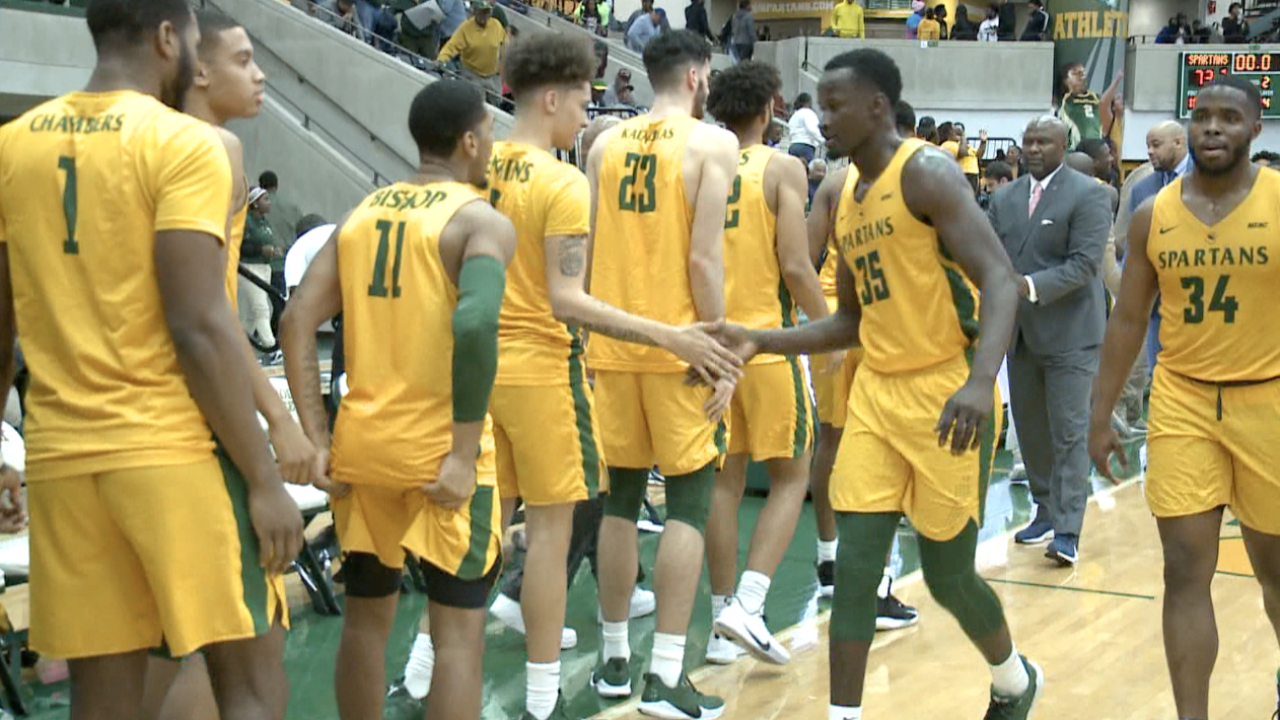 NORFOLK, Va. (NSUSports.com) - A strong second half was the right medicine for the Norfolk State men's basketball team, which defeated Delaware State 85-57 in a conference game on Saturday evening at Joseph Echols Hall.

The Spartans outscored the Hornets by 22 in the second half after a slow start to the contest. A big advantage in the turnover department, along with 13 3-pointers, also played a large part in NSU improving to 7-2 overall in the MEAC. The Spartans now sit a half game back of North Carolina A&T (8-2) for first place.

Senior Jermaine Bishop had five of the team's 13 3-pointers for an 18-point night.

Delaware State (3-19, 2-6 MEAC) shot just 33 percent for the game and committed 20 turnovers. The Spartans held a 27-6 advantage in points off turnovers.

NSU led by six at the break, and by as much as 12 in the first half. Delaware State got as close as four early in the second half before the Spartans surged ahead for good thanks to a 53 percent second-half shooting clip.

The Spartans led by 24 at 67-43 with more than six minutes still to go after buckets by Bryant, Carter and freshman Daryl Anderson. Bryant's layup with a minute and a half left gave the Spartans their largest lead of the game at 28.

The Spartans made less than 36 percent in the first half, although 22 of the team's 27 points off turnovers came during that time.

Tied at 5-5 in the early going, Whitley had both of his 3-pointers during an 11-1 run that gave NSU its first double-digit lead of the game. It would not be the last time DSU fought back from down by at least 10. The Hornets first got to within four halfway through the opening stanza.

Carter and Bishop each knocked down shots from beyond the arc as NSU scored eight straight for a 26-14 advantage with 7:35 to go before the half. DSU again had an answer, scoring nine in a row over the next several minutes to get within three. The Hornets got as close as two late in the half, but Anderson's 3-pointer on the last possession gave the Spartans a 32-26 lead at the break.

After a slow first half, the Spartans were +11 on the glass in the second, and for the contest they outscored DSU 11-3 in second-chance points. Thanks to those 20 Hornet turnovers, NSU also held a 13-0 edge in fastbreak points.

On offense, Norfolk State made 44 percent overall, including 13-of-36 from deep.

Delaware State made 33 percent for the night. Myles Carter led the Hornets with 13 points on 5-of-10 shooting. Pinky Wiley added 11 points, hitting just 2-of-12 from the floor, while Fahim Jenneto totaled 10 points with five boards.

NSU will host Morgan State next Saturday at Echols Hall beginning at 6:30 p.m.