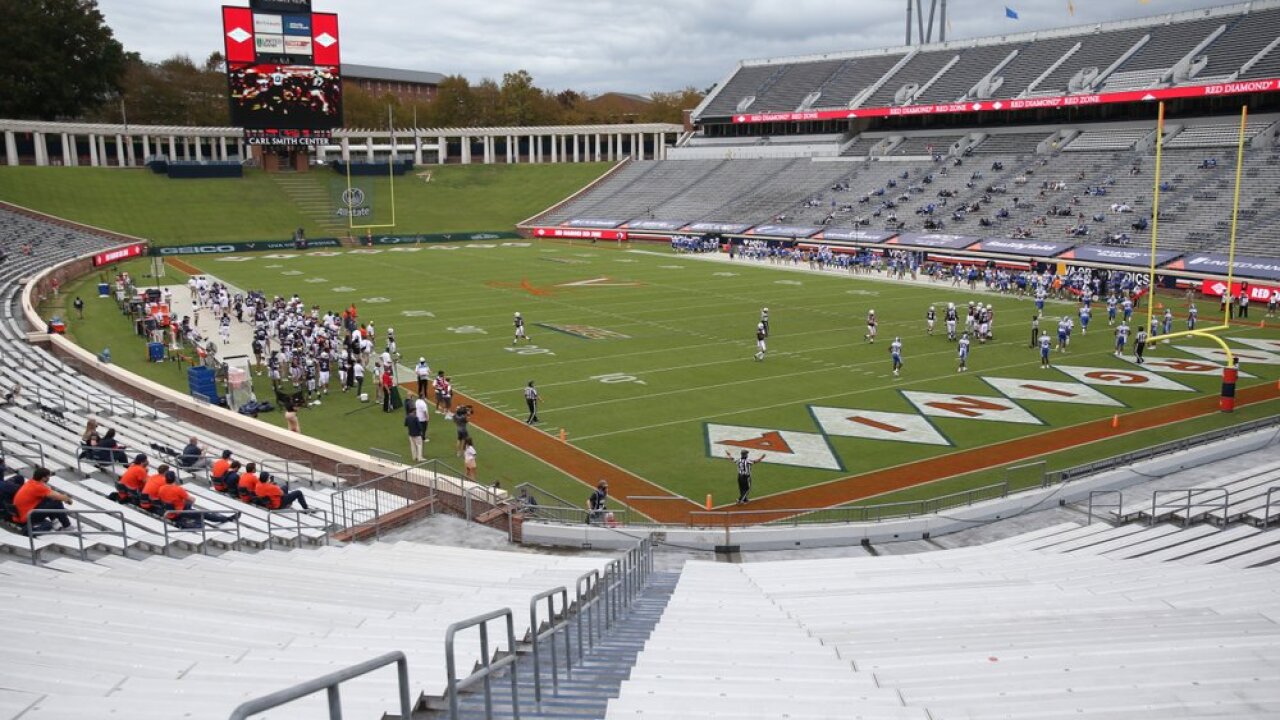 Virginia vs. NC State• Virginia trails the all-time series with NC State, 22-35-1, including a 15-11-1 mark in Charlottesville.• The Cavaliers are hosting the Wolfpack for the first time since 2011 and only the fifth time since the 2000 season.• The teams are meeting for only the fourth time in Charlottesville over the past 19 seasons, a span that started with a 2002 showdown between current NFL signal callers – Matt Schaub and Phillip Rivers, which resulted in a 14-9 Cavalier win over the then-No. 22 Wolkpack.• Sixteen of Virginia’s 22 series wins have occurred since 1983; UVA is 16-10 since then. Nine of the last 16 games have been decided by 10 points or fewer, including the 2006 meeting in Charlottesville – a 14-7 Cavalier win, which is UVA’s last home win in the series.

Five Top Storylines• Virginia and NC State are meeting for the 59th time in a series that began in 1904, but are meeting for only the sixth time over the last 17 seasons.• Virginia enters Saturday with a home winning streak of nine games, dating back to Nov. 10, 2018 vs. Liberty. The streak is tied for third-longest of the modern era at Virginia and is the longest since the Cavaliers also won nine in a row over the 1991 and 1992 seasons. More on the streak on page six.• The UVA offense accumulated 417 yards of total offense at No. 1 Clemson last time out. The Cavaliers became the first ACC team to earn 400+ yards of total offense against the Tigers since 2017 when NC State (Nov. 4) did so. Since the start of the 2019 season only LSU, Ohio State and Virginia (twice) have averaged 5.0+ yards per play against the Clemson defense.• QB Brennan Armstrong passed for 270 yards and three touchdowns at No. 1 Clemson, while also rushing for 89 more yards. Dating back to 2000, he is the only QB to pass for 225+ yards, pass for 3+ touchdowns and rush for 70+ yards in a game against the Tigers.• Armstrong is averaging 337.5 yards of total offense a game which ranks No. 1 in the ACC and No. 8 in the nation.

A Battle to the Finish• Nine of the last 16 meetings between Virginia and NC State have gone down to the wire featuring amazing comebacks and nail-biting finishes on both sides.• Trailing by five with the ball in 2007, Virginia had a chance but Willie Young sacked backup quarterback Peter Lalich on fourth down to seal it with 17 seconds left.• Jason Snelling scored on a 17-yard run with 1:31 to play to lift UVA to a 14-7 win in 2006 at Scott Stadium.• The 2003 match-up featured two NFL quarterbacks—Virginia’s Matt Schaub and Philip Rivers from NC State—in a game that saw four ties and five lead changes before the Wolfpack pulled out a 51-37 win.• Cornerback Jamaine Winborne batted away a ball intended for Bryan Peterson in the end zone to preserve UVA’s 14-9 win in 2002.• Virginia won three straight from 1998-2000 and every win was sparked by a second half comeback.• The Cavaliers used a 14-point second half outburst in 1998 to win 23-13 at home.• The following year UVA erupted for 30 points in the third quarter to break open a tight ballgame (19-10 at halftime) and win 47-26 in 1999.• Fullback Tyree Foreman broke loose for a 38-yard touchdown run with 9:49 remaining to provide the winning points in UVA’s 24-17 triumph in 2000.

Virginia – NC State Connections• NC State’s special assistant to the head coach, Ruffin McNeill, was on Bronco Mendenhall’s first UVA staff in 2016 as an assistant head coach and defensive line coach. The former ECU head coach left in 2017 to coach for his former ECU offensive coordinator, Lincoln Riley, at Oklahoma (2017-19). McNeill and UVA offensive coordinator Robert Anae also coached together for Mike Leach at Texas Tech.• NC State cornerbacks coach Brian Mitchell spent 11 years at BYU as the cornerbacks coach from 1995-05. Mitchell was the cornerbacks coach on current UVA head coach Bronco Mendenhall’s first BYU team in 2005 prior to that the two worked together in 2003 and 2004 when Mendenhall was BYU’s defensive coordinator and Mitchell was the cornerbacks coach.• Mitchell is a 1995 graduate of BYU and played for the Cougars from 1987-90. He was teammates from 1988-90 with current UVA offensive line coach, Garett Tujague.• NC State defensive coordinator, Tony Gibson, was on the same Arizona staff in 2012 with UVA’s OC Robert Anae. The Wildcats won the New Mexico Bowl that season. Anae left after the season to become Bronco Mendenhall’s offensive coordinator at BYU.• UVA’s Tavares Kelly attended St. Thomas Aquinas High School (Fort Lauderdale, Fla.), as did NC State’s Devon Betty. The NFL announced that St. Thomas Aquinas High School had the most alums on NFL rosters entering the 2020 season with 14. St. Thomas Aquinas has earned this honor for the seventh season in a row and eighth in the past nine.

Cavaliers Home Win Streak Stands at Nine in a Row• Dating back to the Nov. 10, 2018 game against Liberty, UVA has won nine home contests in a row, which is tied for No. 3 in program history during the modern era.• The nine wins are the most since the Cavaliers also won nine in a row at Scott Stadium from 1991-92.• UVA’s current win streak ranks No. 10 in the nation among active streaks, sharing the spot with Air Force and Florida.• Prior to the modern era, UVA won 24 games in a row at home from Nov. 11, 1899 to Nov. 12, 1904.