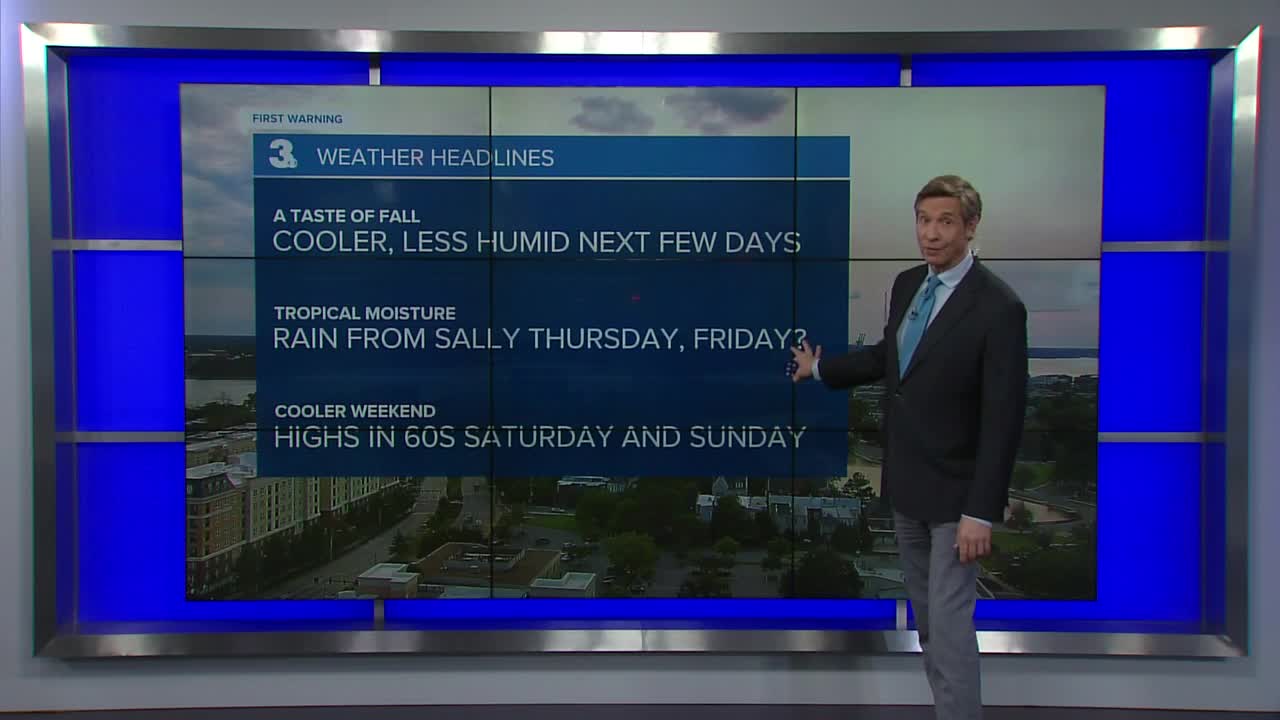 Skies will clear late and temperatures will dip into the 60s overnight.

Behind the cold front, temperatures will be cooler, and the humidity will be much lower. Expect a nice taste of fall both Tuesday and Wednesday. Tuesday will be a bit on the breezy side with winds out of the northeast at 15-20 mph. Temperatures will be below-normal only warming to the low and mid 70s. Skies will be partly cloudy and rain chances will remain low.

A bit warmer on Wednesday with highs in the upper 70s under mostly sunny skies. Thursday should be mostly dry as well with clouds building in as the day progresses. Rain chances will increase late. Dewpoints will rise to the mid 60s, so it will be a bit sticky and temperatures will be warmer with highs near 80.

A front along with some possible moisture from what is now Hurricane Sally will move in to end the work week. Expect high temperatures near 80 degrees.

A big cool down on tap for the weekend. Expect highs in the low and mid 70s with dewpoints in the 50s. Fall is starting to show itself!

Tropical Storm Vicky expected to weaken overnight.
Located about 455 miles WNW of the Cabo Verde Islands.
Moving toward the northwest near 7 mph.
Maximum sustained winds are near 50 mph, with higher gusts.
Tropical-storm-force winds extend outward up to 105 miles from the center.
Weakening is forecast due to strong upper-level winds during the next 48 hours, and Vicky is likely to degenerate into remnant low by Wednesday.

Hurricane Paulette accelerating northeastward.
Located about 275 miles NNE of Bermuda.
Moving toward the NE near 17 mph.
Maximum sustained winds are near 105 mph, with higher gusts.
Additional strengthening is likely through Tuesday night as Paulette accelerates northeastward to east-northeastward. Gradual weakening is forecast to begin on Wednesday.
Hurricane-force winds extend outward up to 60 miles from the center and tropical-storm-force winds extend outward up to 230 miles.
**Swells generated by Paulette are affecting portions of the east coast of the United States. These swells are likely to cause life-threatening surf and rip current conditions.

Outer rainbands of Hurricane Sally moving onshore in the Florida panhandle.
Located about 90 miles E of the mouth of the Mississippi River.
Maximum sustained winds near 100 mph.
Moving toward the west-northwest near 3 mph.
Additional strengthening is forecast tonight and early Tuesday and Sally is expected to be a dangerous hurricane when it moves onshore along the north-central Gulf coast.
Hurricane-force winds extend outward up to 45 miles from the center and tropical-storm-force winds extend outward up to 125 miles.

Tropical Storm Teddy is expected to become a hurricane on Tuesday.
Located about 1100 miles E of the Lesser Antilles.
Moving toward the west near 13 mph.
Maximum sustained winds near 50 mph, with higher gusts.
Steady strengthening is forecast for the next several days, and Teddy is expected to become a hurricane Tuesday and could reach major hurricane strength on Thursday.
Tropical-storm-force winds extend outward up to 115 miles from the center.