The Virginia Beach school bus driver involved in a deadly crash is on leave pending an investigation.

Beach police tell NewsChannel 3 they are still interviewing witnesses, and plan to present evidence to the Commonwealth's Attorney Officer for their review.  Prosecutors could decide what, if any charges, will be filed in the case.

Police have now identified the man who died in a fatal crash with a Virginia Beach School bus Tuesday morning.

He has been identified as Christian Raul Montes, 27, of the 3500 block of Campion Avenue. A family friend tells NewsChannel 3 he was in the Navy and he was married with two children. He believes Montes was on the way to work when the accident occurred.

Investigators say they've determined that the bus was going northbound on Holland Road approaching the intersection of South Independence Blvd.

The Escort, which was disabled at the time, was stopped in the northbound lane of Holland Road.

Police say the driver of the Escort was standing outside of the car at the time when the school bus hit the back of the vehicle and the victim.  He was pronounced dead at the scene.

The bus was heading to Bayside Health and Science Academy; a specialized program for students who are interested in the medical field, according to Jennifer McCarrel of Virginia Beach City Public Schools.

Eleven of the students were transported to the hospital; the remaining 24 students went to Bayside High School, where they were greeted by counselors, McCarrel said.

Nine of the 35 students on the bus attended school on Tuesday; the rest went home, officials say.

Students were reunited with their parents at Bayside High School.

The four students at Sentara Independence walked into the ER under their own power, after riding together in one ambulance. The seven students taken to Sentara Princess Anne were all treated in the ‘Minor Care’ area of the emergency department. Most complaints involved headaches. One student complained of neck pain.

Officials say speed was not a contributing factor in the case. Investigators say they are currently interviewing witnesses. This incident will be formally screened with the Office of the Commonwealth Attorney once the preliminary investigations are complete.

The bus driver is currently on administrative leave.

Student involved in bus accident: 'We started smelling smoke and we all panicked' 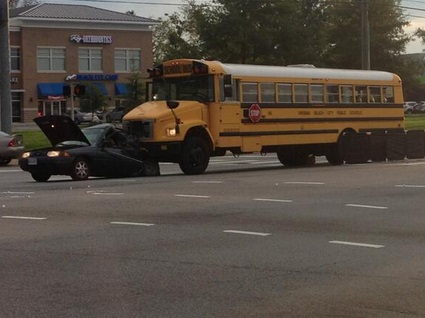