Trouble growing a full mustache or beard? A facial hair transplant might be the answer!

Beards, beards, beards - it seems everywhere you look there are men sporting facial hair. For some men like David Orne, a local communications engineer with the Coast Guard, it comes easy.

Orne told NewsChannel 3 Anchor Kurt Williams, “Well it feels good to have facial hair.  We were born with it— I tried shaving, it grew back.  I gave up.  Why fight it? ”

We’re talking about beards that require daily maintenance.  Just ask Josh Kimm, president of the Hampton Roads Beard and Stache Society, about maintaining his thick and long beard, "You have to brush it out; when I get up in the morning now with this length, it's in knots."

For some guys, growing a full beard is a serious challenge, however, there is a way to get around it if you can’t grow a mustache or a beard— facial hair transplants. Hair is taken from the back of your head and surgically inserted it in your beard and mustache areas– even eyebrows.

That’s what 23-year-old Christopher Thomas is having done, his own hair transplanted to his eyebrows and mustache areas.

Not a myth–in fact, Linda Carnazza  owner of the Virginia Surgical Center in Virginia Beach, said there is a steady demand for this procedure. “At our other clinic in DC, we’ve gotta do, I don’t know, five a month, six a month— facial hair, full beards, mustaches; eyebrows are very common,” she said.

But how does it work?

The procedure begins with removing a strip of hair and tissue from the back of Thomas' head.

Carnazza said that is called the donor hair. "When you take it from here and move it to the face or move it to the eyebrows or the chin or your beard---that's a permanent gene, you never lose it," she said.

Thomas has been looking for a solution to his thin eyebrows ever since he shaved them off when he was a child. "One of the neighborhood kids bet me to shave my eyebrows off and I showed up to school the next day and I did not have any eyebrows," he said.

They never fully grew back so Thomas started looking for solutions to get his eyebrows filled in, along with his mustache, when he realized he couldn't grow a full one on his own.

Thomas said, "I wanted something that was full and when I drew it on myself, I was like, I really like this, but I can't grow that hair necessary so I'm like, how can I make this happen?"

A strip of hair taken from the back of his head was meticulously cut up into tiny hair grafts, tissue containing the patient's hair, and then carefully placed into his mustache and eyebrow areas. It was a very tedious process requiring several hours for this delicate, repetitive procedure.

The first hair will start to come in after three or four months and can take up to 11 months to come in fully. 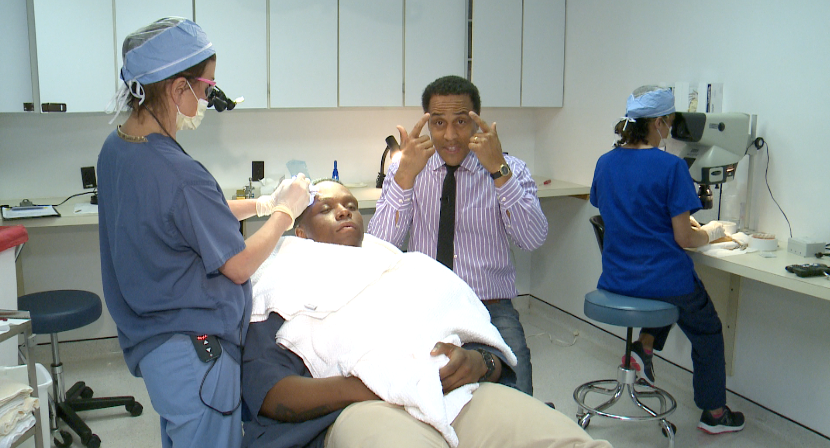 For those who ask, facial hair transplants can cost from $3,000 to $7,000 and the surgery takes hours. Christopher said, "I would say to them, if you have, like a vision, you're going to do what's necessary to make that happen."

No one knows that better than Allen Anderson, who is a member of the Hampton roads Beard and Stache Society.

Anderson could grow a mustache and a goatee, but not a full beard. That all changed when he decided to have a facial hair transplant a few months back.

Anderson had a few areas filled in and said he might go back for more treatments.

"And if you want to do something there's often, in modern society, they're often ways to find ways to achieve what you want," he said.