NORFOLK, Va. – Louis Jones has been painting since he was able to hold a paint brush. Now in his early sixties, Jones’ passion for painting is stronger than ever. He wakes up in the middle of the night thinking about his next piece of art.

“Art has to come from your soul. It has to touch you emotionally,” he said. “I still don’t think I’m a great artist, I think I’m getting pretty good.”

Pretty good for sure.  You can see Jones, his wife Susan, son Ryan, and late father Herb’s work all over the world. His art resides in the homes of many names you know,  from Rudy Guiliani to Chris Martin of Coldplay.

All of the Jones artists are stars in their own right.  Louis’ father Herb listed among the Who’s Who of American Art. Susan’s acrylics are beautiful pieces, even featured in the Robin Williams movie “What Dreams May Come.”  Louis’ work was used in the movie as well.  Ryan’s watercolors are different than his dad’s and have a distinct look of their own and are very popular with patrons. His work has also been published.

The family has sold 500,000 prints and originals and you can see their work on nine New York Times best-selling novels by popular authors like John Grisham and Ian McEwan. Louis’ piece “The Lake III“ was on the cover of Neale Donald Walsh’s ‘Conversations With God.’

For the Jones, success wasn’t instant or easy.  Louis, Susan and son Ryan are here at their gallery in Virginia Beach seven days a week, 14 hours a day because they love what they do.

But in one day, with what seemed as fast as the stroke of a paint brush, a dark cloud descended over this tight knit family.

” I went to bed April 8th perfectly okay, I woke up April 9th and I was swollen from here to here,” Louis said referencing his lymph nodes on the side of his neck.

“It was lymphoma and it was incredibly aggressive.”

And Susan was in shock but ready for the fight that lay ahead, “I wouldn’t accept it so whatever we have to do,  experimental drugs, because you’re not leaving. I’m not letting you go.”

And instead of going home depressed, Louis went to his safe place, his and Susan’s home away from home, the gallery.

“So we had like 50 people in the gallery and I painted a painting called Overjoyed. People who know me said,  so they just told you that you have cancer and there’s very little chance you’re going to survive,  and you paint a painting called overjoyed. Why would you do that? “

“Nobody’s guaranteed tomorrow, so what are you going to do right now? So I decided to live,” Louis said.

Susan knew she had to be strong for her husband, but she was terrified, “He has to make it because we’re so close from the time we met when we were 20 we’ve been together ever since and we’re always together,”

Hand in hand 42 years, they knew it would take them both to fight this. They withdrew from nearly everything and everyone and focused solely on getting Louis well.

Louis underwent one of the most aggressive treatments you can get.

“I had like 13 bottles of this toxic stuff going in me and the other patients had like three,” he said.

Susan said watching the love of her life go through the pain of cancer treatment changed her, “I’d be in bed at night, he’d be asleep, I’d be crying all night.”

And it changed her painting too, “I was working on a painting during this time and Louis kept taking the painting to chemo treatments with him.”

Her piece was was called ‘Changes’ and it started out as this real bright painting and it kinda got darker and darker.

Even through this dark time, Louis has such positive, warm memories of the people he grew to know and love in the chemotherapy room.

After more than a year of chemicals and radiation, Louis and Susan heard that one word that every cancer patient wants to hear. Remission.

“The day they told us he was in remission I was so happy, I came home and I started on that painting and I stayed on it. It was my celebration of love life and just joy,” Susan said.

We visited them at the Jones Gallery at Town Center in Virginia Beach, Louis sat in front of a blank piece of paper, giddy over starting another painting.  And he started this piece like he’s started every piece since he’s known Susan. He wets the paper with his Red Sable brush, the one Susan gave him soon after they first met.

After 42 years, held together with duct tape, the brush does glide effortlessly across the paper.

“Look at the paint, it just wants to be clouds,” he said.

Now the Jones take nothing for granted. And now more than ever, he and his family want to share their love and enthusiasm with everyone who looks at their work.

Click here to check out more about the Jones Art Gallery. 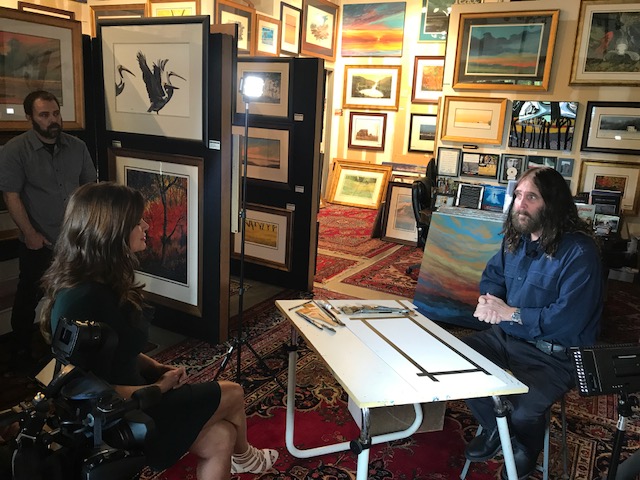