Rare disorder causes unbearable itching for some pregnant women: Why it’s important to Fight the Itch!

VIRGINIA BEACH, Va. - It's a rare condition that causes unbearable itching for some pregnant women and in some cases, it can be very dangerous to the baby.

The story hits close to home News 3's Kurt Williams because his oldest daughter Faith was diagnosed with this disorder during her pregnancy.

"It feels like you have spiders crawling all over your skin," she said.

Her husband Kevin noticed something was up.

"She was just complaining, complaining about itchiness and there was no rash or anything ... she was scratching like crazy everywhere," he said.

Faith,  a Virginia Beach middle school teacher, made it clear - this was not regular itching.

"It makes you feel like you might be going crazy because there's never a rash that develops with it, but you feel this insane itching and tingling and it feels like there are bugs all over you," Faith said.

Faith had a rare condition that meant extra monitoring for her and her baby. So Faith had to undergo extra ultrasounds and additional testing to make sure this high-risk pregnancy was going well, because blood tests confirmed she had something called Intra-Hepatic Cholestasis of Pregnancy, or ICP. 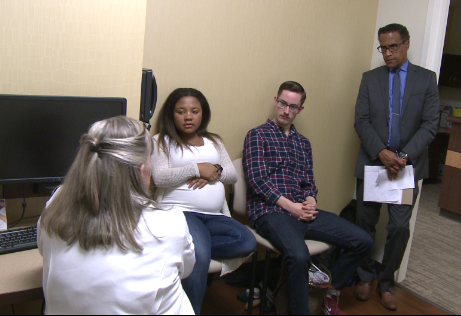 It has expecting moms with this condition seeking relief in the form of medicated creams, cold showers and prescription medication. Typically, it worsens in the last trimester and at night.

So for pregnant women being treated for cholestasis, it means continued blood testing to measure those bile acids and taking a certain prescription medication, Ursodiol, to try and keep those levels in a certain score. However, it doesn't always work, and Dr. de Veciana cautioned Faith to be on the alert.

"But you know, I think the elevation of the bile acids - if you hit 40 and above, you're starting to get into that more severe zone," Dr. de Veciana said. "The issue with you is that if your levels keep doing this routine up and down and up and down, you're going to be heading to delivery prematurely."

And that's exactly what happened. Just six days after our interview,  Faith's doctors made a decision to induce labor six weeks early after getting the results from the latest lab work on her bile acid levels.

The numbers were not encouraging.

And that was the case. Faith had an emergency C-section and delivered Harper Grace, coming in at five pounds, four ounces. Mom, baby, Dad - and Granddad - are doing just great!

Yes, Harper did have to spend a few days in Sentara Princess Anne's Neo-natal Unit, but she is now home with Mom and Dad.

Faith wanted to share her story because she wonders what would have happened if she had not initially said anything to her doctors about the itching - if she had just dismissed it - but she does not want to overly alarm women. She stresses this is not normal itching - it became unbearable.

So what causes it?

Dr. de Veciana says that's a bit of a mystery, but adds there could be a family history - which wasn't the case with Faith - or could be what the doctor calls a "hormonal trigger." The important thing both Faith and the doctor want to emphasize to expecting moms: Listen to your bodies and have a conversation with your doctor.