Remembering lives lost, those who served on 77th anniversary of attack on Pearl Harbor

HONOLULU, HI. - In the words of President Franklin D. Roosevelt, it's "a date which will live in infamy."

Friday, December 7 is Pearl Harbor Remembrance Day, and this year marks the 77th anniversary of the day hundreds of Japanese fighter planes attacked American troops at the naval base at Pearl Harbor in Honolulu, Hawaii.

According to the History Channel, nearly 20 American naval vessels, including eight battleships, and more than 300 airplanes were destroyed. More than 2,400 Americans, including civilians, were killed and another 1,000 people were injured.

Although the attack was a surprise, historians say Japan and the U.S. had been "edging toward war for decades." Roosevelt asked Congress to declare war on Japan the day after the tragedy, launching the U.S. into World War II in 1941.

The USS Arizona memorial in Pearl Harbor was established in 1962 and honors the memory of the crew of the battleship as well as the other service members and civilians who were killed in the attack. The memorial sits on top of the sunken Arizona, which is submerged in about 40 feet of water just off the coast of Ford Island, the National Park Service says.

Ray Chavez, the nation's oldest survivor of the attack, died in November at 106. He was a quartermaster stationed in Pearl Harbor at the time. 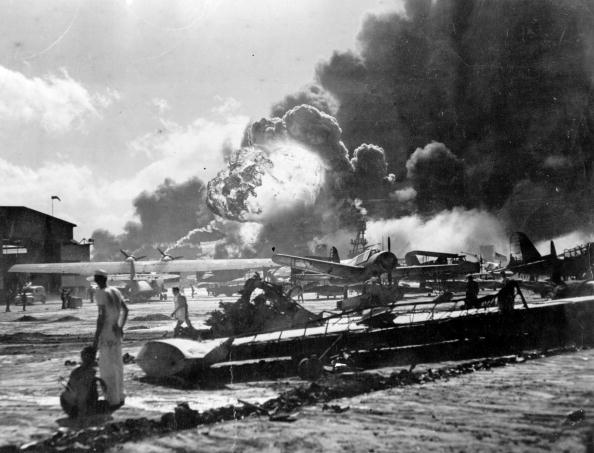 Moore was on the USS West Virginia when the base was bombed. He told News 3's Erin Miller that it is a day that he will never be able to forget.

"I'm telling you, I miss many [of my] buddies. When I have nothing to do, I think about them and that's all," Moore said.

He was honored with a service in the church at Joint Expeditionary Base Little Creek-Fort Story. Afterwards, a special wreath laying ceremony nearly brought him to tears.

Alongside Moore were family, friends and other service members. They spoke of the thousands of innocent people killed and wounded on December 7, 1941.

"I really appreciate everything that everyone is doing, but I still miss a lot of my buddies. I'm sorry," Moore said.

With each passing year, the world loses another window to the past.

Hard not to get emotional during a ceremony like this. Paul Moore is the last known #PearlHarbor survivor in our area. Tears fill his eyes as he sings God Bless America #livinghistory https://t.co/bQpzOe75En pic.twitter.com/Ske6xC0WKN