VIRGINIA BEACH, Va. - Donations for the Goodwill on S. Lynnhaven Road were smashed in the middle of the night, and now police are looking for the guy who did it.

Dropping off items at the facility is part of Linda's monthly routine. So, when she found out that some had been destroyed, she was shocked.

“Terrible. Why would someone want to do something like that?” she said.

Little did he know, in the midst of his destruction he was being caught on camera the whole time. A surveillance camera captured pictures where you can see the man wearing dark clothing and holding the baseball bat over his right shoulder.

“I think it would surprise everybody around here and every shopper in there that something like this could happen.”

After taking a few swings to the items, police say he tried to bust through the door with the bat. He didn't get inside, but he did break the window. 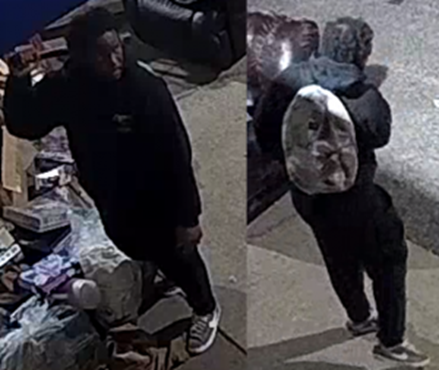 Frequent shoppers say they haven't seen something like this before, but when they have donated, they did it during the day.

“Before I moved, I donated two bags, left it in the back but I rang the doorbell and somebody came and grabbed it," said Goodwill shopper Isaiah Riddick.

Police are still looking for the man involved, and community members hope he doesn't cause any more damage.

“I hope that the person is caught and they learn a lesson," Linda said, "but don’t let that completely stop you from donating.”