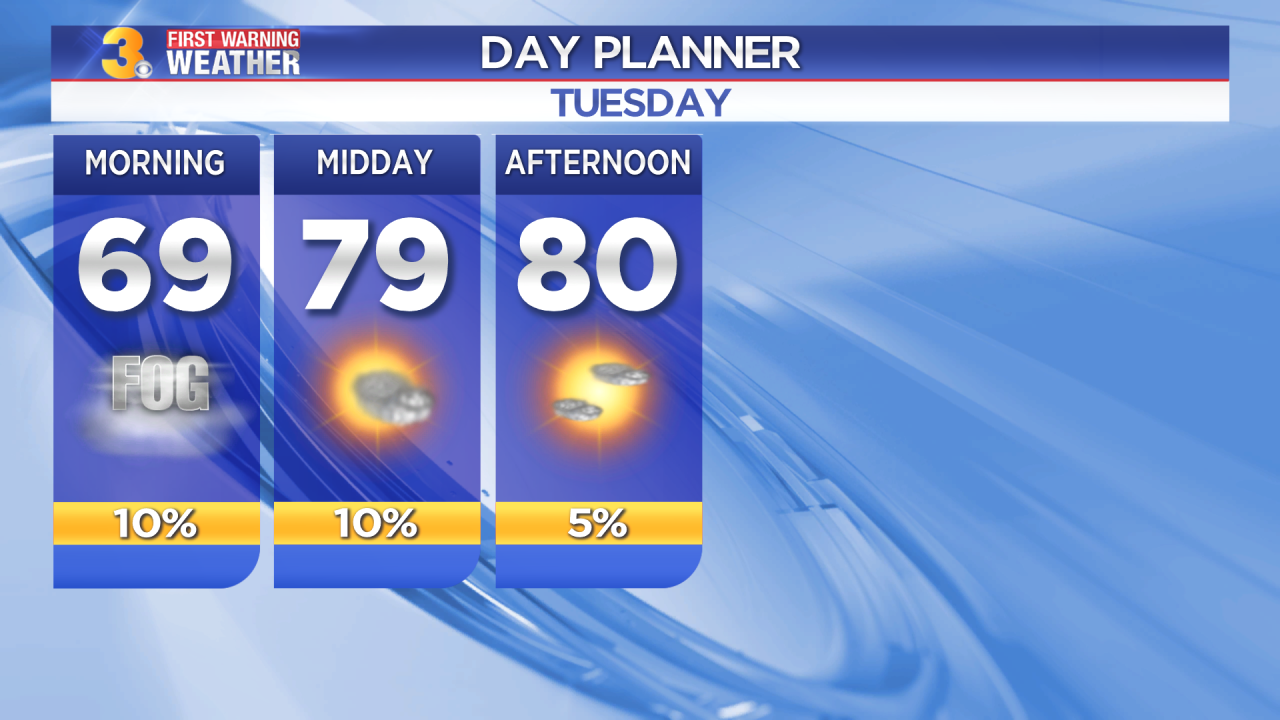 Partly to mostly cloudy overnight with lows in the upper 60s to low 70s. Some patchy is possible Tuesday morning.

High pressure will build in for Tuesday and Wednesday. We should stay dry on Tuesday. Winds will be off the water, so expect the coast to be a little cooler with more cloud cover. Temperatures will warm to the low 80s.

The First Day of Fall is just two weeks away, but it’s going to feel more like summer by Wednesday. Temperatures will warm to the mid and upper 80s under mostly sunny skies. It will feel closer to 95 degrees due to the humidity. Thursday will be our warmest day of the week. Skies will be partly cloudy with highs in the upper 80s to near 90. It will feel closer to the triple digits though! Keeping a 20 percent chance for a shower or storm.

A little bit better chance to see some wet weather to end the work week. Temperatures will be closer to normal for this time of year with highs in the low 80s. Storms will be possible over the weekend. Doesn’t look like a washout though. Just keep an eye on the sky. Temperatures will warm to the mid 80s.

Gabrielle is moving toward the northeast near 24 mph, and this general motion with an increase in forward speed is expected over the next couple of days. Maximum sustained winds remain near 50 mph with higher gusts. Little change in strength is forecast tonight and early Monday, but a weakening trend is likely to begin by early Tuesday. Gabrielle is expected to become an extratropical low Tuesday morning and dissipate over the far North Atlantic near the northern British Isles on Thursday.

A weak area of low pressure, associated with a tropical wave, located more than 900 miles east of the Lesser Antilles continues to produce disorganized showers and thunderstorms. Some slow development of this system is possible during the next few days before upper-level winds become unfavorable for tropical cyclone formation. This system is expected to move generally westward across the tropical Atlantic Ocean for the next several days.

A surface trough interacting with an upper-level low is producing disorganized showers and thunderstorms from the north coast of Hispaniola northward over the southwestern Atlantic for a few hundred miles. Little, if any, development of this disturbance is expected during the next few days while it moves west-northwestward across the Bahamas and the Florida peninsula. However, environmental conditions could become a little more conducive for development when the system moves into the Gulf of Mexico over the weekend.

A tropical wave located just off the west coast of Africa is expected to move quickly westward during the next several days. Some slow development is possible late this week and over the weekend when the system is several hundred miles east of the Lesser Antilles.