5 children, 3 adults without a home after Chesapeake fire

CHESAPEAKE, Va. - In the time that Veronica Drayton walked to the store and back home, her world had changed.

As firefighters shuffle in and out of her house, she sighs and says, "I guess everything happens for a reason. It's just... did it have to happen to me? Or our family?"

Her house in the 2500 block of Border Road caught fire around 2:30 p.m. Monday. Officials say the fire started in the kitchen. It was ruled accidental.

2500 block of Border Road in Chesapeake

Crews were able to get the fire under control quickly, but not before major damage was done inside.

Insulation was strewn across the inside and outside, the oven hood was charred and everything inside the one-story building was destroyed.

It's a major roadblock for a family that was just getting on their feet. They had moved into the home in April, and Veronica's husband works full-time to provide for the family of seven.

"They work so hard to get to where they're at right now that it's sad and it's cold," Veronica's brother, Jayquan, says.

To make matters worse, Veronica and her youngest child have heart problems. They weren't able to grab their breathing machines or medication from inside.

The Red Cross has stepped in to help.

"I hope nobody else has to go through this," she says with tears in her eyes.

The kids range in age from less than a year old to 13 years old. One of her children saw the smoke and flames as he was getting off of the school bus. They were taken to a nearby neighbor's house as their parents dealt with logistics.

The fire has now caused complications for the holidays ahead.

Even so, they say they are thankful they are alive and have one another.

"It's times like this [that] you need your family and good friends and God Almighty," Saunders says.

The family will need to be relocated. 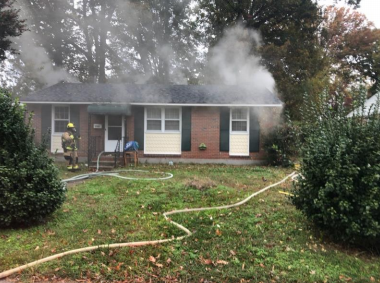