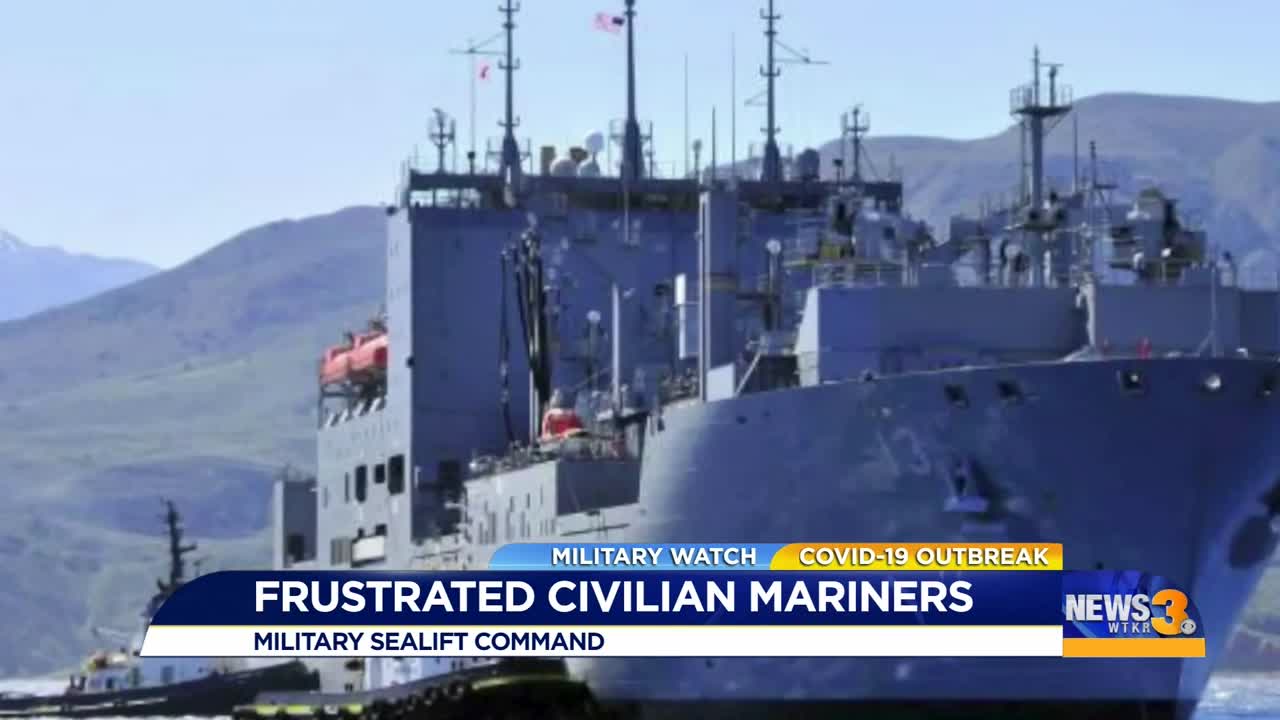 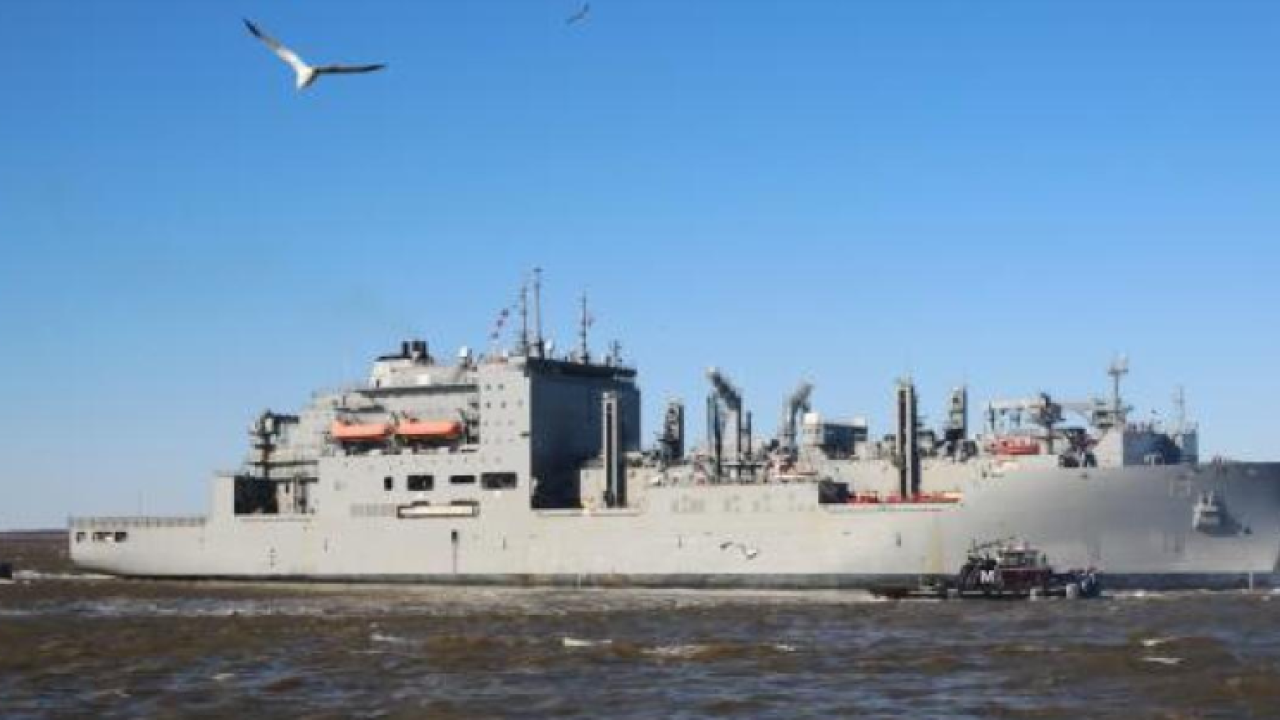 Now, lawmakers are asking questions about certain decisions by made by the military.

Civilian mariners on MSC ships tell News 3 they are upset by the way they say they are being treated. A "gangway up" order put into effect on March 21 prevents thousands of them from leaving ships unless they are being relieved.

The biggest complaint repeatedly expressed is that Navy personnel and contractors on certain ships are allowed to come off and on without restrictions, but civilian mariners are required to stay onboard the ship.

In some cases, they are just a few minutes away from their homes and families.

Identities of civilian mariners we interviewed are being protected because they fear retaliation for speaking out.

Others have told News 3 morale has been greatly impacted.

“Everyone is frustrated. Everyone wants to go home. There’s a high percentage of people that live in the area, and they want to go home,” said another civilian mariner. “Nothing seems to make sense.”

Captain Randall Rockwood is with the International Organization of Masters, Mates & Pilots – a union for those impacted.

He said the civilian mariners aboard the ships weren’t prepared for the strict regulations, and face health concerns, a lack of communication and extreme frustration.

Rockwood said the civilian mariners are not being treated fairly.

“To be locked up on your own ship, treated like you’re a prisoner with no forseeable light at the end of the tunnel."

The House Armed Services Committee opened an inquiry into the situation and sent us the following statement:

The House Armed Services Committee continues to work with the Navy to understand how the service is responding to the COVID-19 pandemic, including the gangway up order issued by the Military Sealift Command (MSC). While we trust that Military Sealift Command is acting in good faith to protect the workforce, we have concerns about reports that military, civilian, and contractor personnel are freely allowed on and off MSC ships, diminishing the effectiveness of the bubble MSC is trying to create. Moving forward, it is imperative that MSC implement sound public health measures that protect personnel, preserve critical mission capability, and address the personal and medical needs of the mariner workforce.

We reached out to MSC, who said pending litigation prevents them from doing an on-camera interview with us, but they answered the following questions:

How long will the civilian mariners be restricted on the ships?

MSC continues to monitor COVID-19 developments and has implemented processes, procedures, and mitigations to modify and reduce the counter-COVID tactics when appropriate, while still protecting the health and safety of the mariner work force. For the near term, MSC will stay the course with the Gangways Up order as it has proven effective. Relaxing the Gangways Up order will require a risk-based phased approach, similar to approach being taken by government agencies ashore, to reset and guard against “reflash” based on the science and prevalence of the disease.

Unlike their active duty counterparts who are assigned to a ship for up to three years, a notional tour of duty for a CIVMAR is 4 months assigned to a ship. The Gangways Up order only applies while a CIVMAR is assigned to a ship. At the end of their assignment and once a relief arrives, CIVMARs are permitted to depart the ship and return home. MSC is continuing to maintain efforts to execute timely relief of mariners, albeit with additional planning and timelines required to support COVID-19 travel mitigations.

How many civilians have tested positive for COVID-19 on the Leroy Grumman?

USNS Leroy Grumman has been in a maintenance period at Boston Ship Repair since February and hasn’t been subject to the Gangways Up order. The crew are being housed in a local hotel while the ship is uninhabitable. In late April, after a number of Leroy Grumman and shipyard personnel were found to be COVID+, the decision was made to quarantine and test the entire crew. We have Navy medical professionals on scene to support the mariners to include an industrial hygienist who is working with MSC to ensure the ship is COVID free and to develop protocols moving forward that ensure the maintenance period can be completed safely.

How do you feel about the House Armed Services Committee opening an inquiry into MSC?

MSC continues to respond to requests for information from Congressional members and staffers in a timely manner.

“The Mariners on ships worldwide as well as in the United States are very often not recognized or understood. People go about their business every day and they don’t know where items come from,” Rockwood said. “Mariners on ships are restricted to ships and are still trying to do a good job supporting the United States and the security in our Navy.”

MSC said active duty Sailors who are part of the Medical Treatment Facility (MTF) team remains on board USNS Comfort while in Reduced Operating Status (ROS) are subject to the Gangways Up order. They said the Gangways Up order remains in effect for the near term as it has proven effective. They said there are 61 Sailors as part of the MTF aboard USNS Comfort. They also said USNS Mercy, the Navy’s other hospital ship, also has 61 active duty Sailors who are part of the MTF team that remains on board USNS Mercy while in ROS.