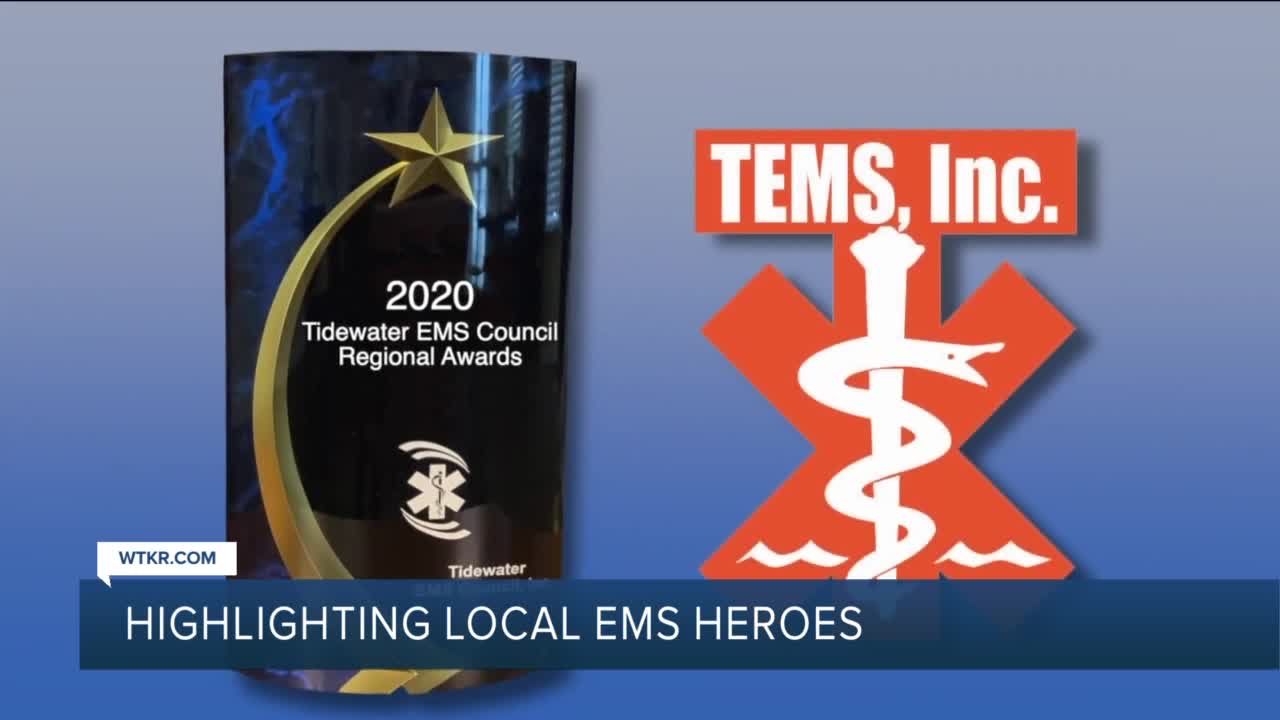 CHESAPEAKE, Va. - Every year, the Tidewater EMS Council celebrates regional EMS personnel for their achievements and excellence in service. This year was especially meaningful because they put their lives on the line for the sake of others during the COVID-19 pandemic.

Additionally, for the first time in the more than 30-year history of the TEMS awards, there were two winners selected for the Lifetime Achievement Award: Dennis Keane and James “Jim” Hoffler.

Two exceptional individuals with storied careers have dedicated more than 40 years of service to their communities.

Keane and Hoffler are just some of the unsung heroes in EMS.

“They are top notch, class act,” said Tidewater EMS Council Executive Director David Long. “If everybody aspired to that level, we would be well served in the Tidewater region.”

Long noted the challenges that come along with the job and the compassion that is shown in stressful situations.

“Knowing that some of the people you interact with are going to be emotionally overcome, distraught, maybe combative and argumentative, but yet they maintain that level of compassion and level of empathy, the ability to still provide the highest quality of services,” Long said.

Keane and Hoffler, along with several other regional EMS personnel, were recently recognized by the Tidewater EMS Council during its annual ceremony, which was held virtually this year because of COVID-19.

Recipients were nominated by their peers in 13 different categories.

“All the men and women I met along the way, that just made it a very valuable career, it makes the award that much more valuable because I know it came from my peers,” said 2020 Lifetime Achievement Award Recipient Keane.

2020 Lifetime Achievement Award Recipient Hoffler said, “To be here selected from the whole bunch of folks that are out there both paid and volunteer, it’s very humbling.”

Keane retired in June as the District Chief of the Virginia Beach Fire Department.

Hoffler retired in July as the Fire Chief of the Portsmouth Fire, Rescue and Emergency Services.

Hoffler said the already challenging job in EMS was even more taxing for his crew at the start of the COVID-19 pandemic.

“When we get called to go somewhere, we get to the front door and something bad is happening, we don’t have the option to leave,” he said. “These brave men and women who are out there and are out there right now doing it, are going into these situations. We know a lot more about it; we’re a lot more prepared.”

Their notable careers at times crossed paths. Both men served as flight medics as part of Nightingale Air Ambulance, worked with the CHKD transport team and served on the FEMA Virginia Task Force 2.

Keane was part of FEMA’s search and rescue effort after the Oklahoma City bombing.

Hoffler began his career in 1974 as an EMT with Portsmouth Ambulance Service and was one of the region’s first cardiac rescue technicians before joining the Portsmouth Fire Department.

“I was born into a fire department family,” said Hoffler. “It’s in my blood; it’s still in my blood.”

Hoffler is also the 2020 recipient of the Excellence in EMS (R.C. Dailey Award).

Both Keane and Hoffler’s contributions and service will leave an indelible mark on their communities for generations to come.

All award recipients will now advance to the Governor’s EMS Awards program for a chance to receive statewide recognition for their dedication and service.

News 3 congratulates all the winners and thanks all the front line workers for their service.