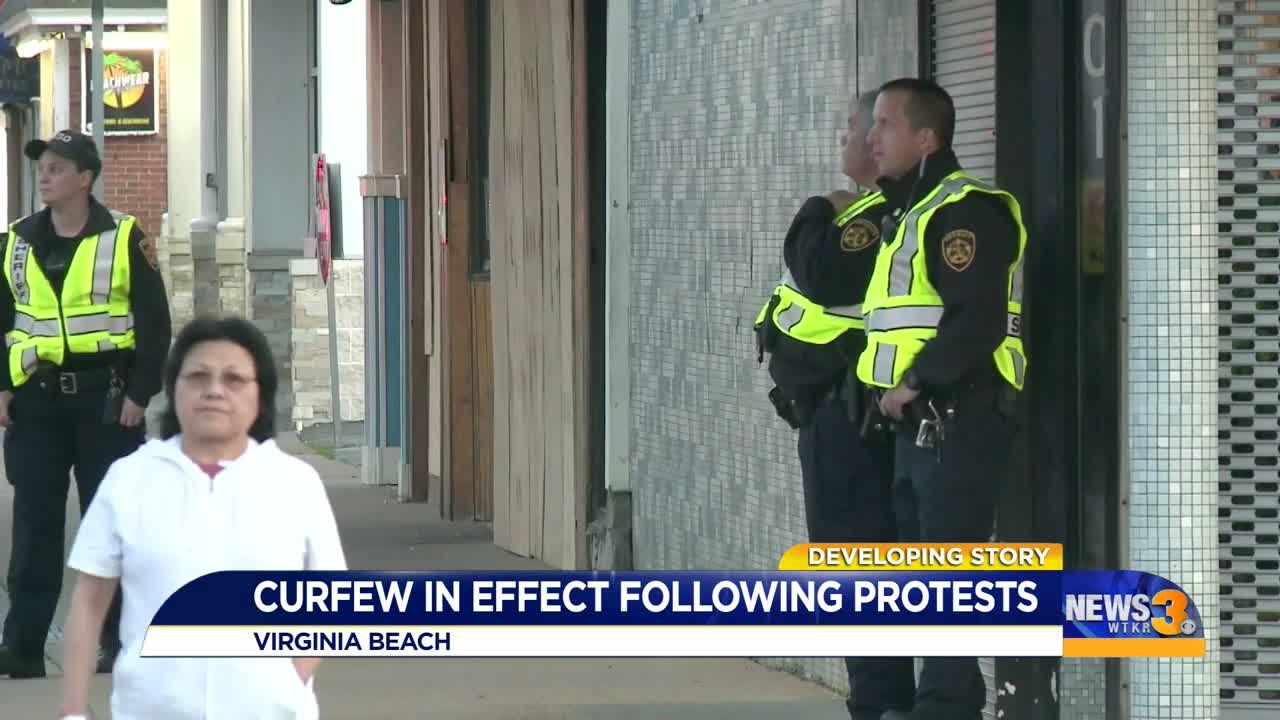 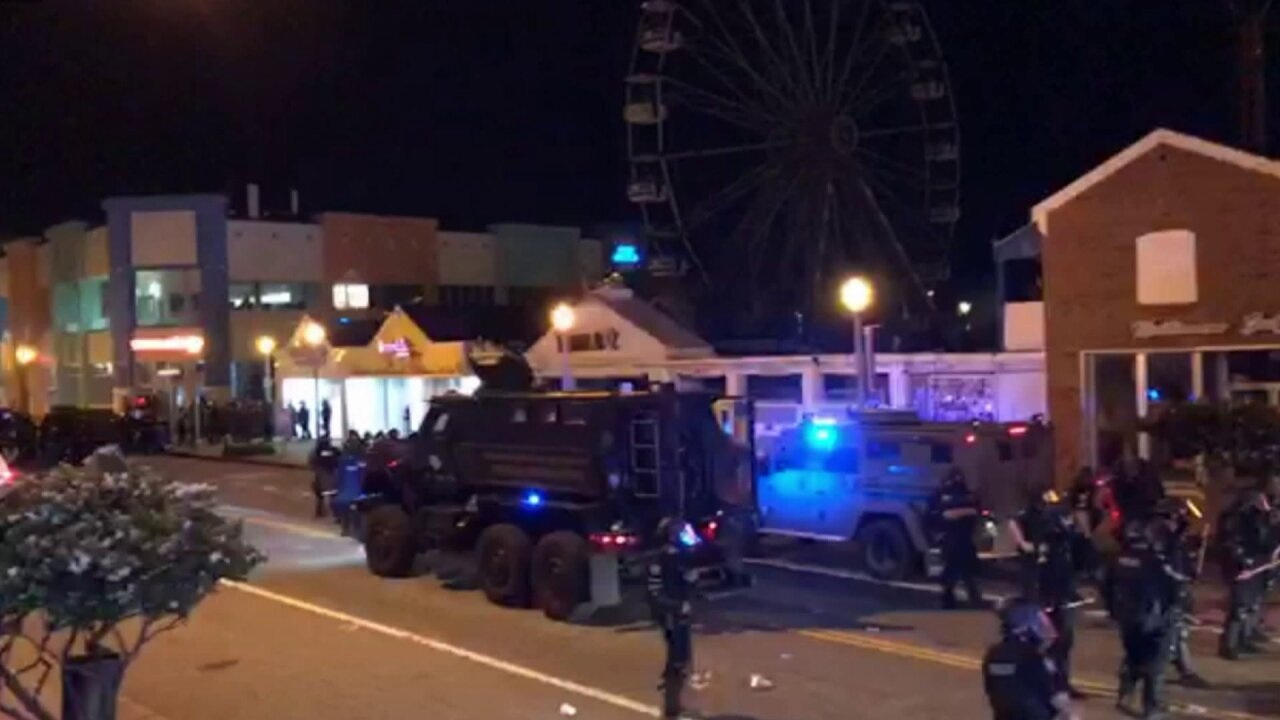 VIRGINIA BEACH, Va. - As protests continue across the country and in Hampton Roads, Gov. Ralph Northam has authorized leaders of the City of Virginia Beach to implement a curfew.

The curfew will start at 8 p.m. Monday, June 1 and will end at 6 a.m. on Thursday, June 4 unless extended by further executive order.

Around 8:30 p.m. Monday, Virginia Beach Police temporarily closed all streets in Town Center except Market Street and Columbus Street in order to enforce the curfew as a large group of demonstrators began to gather. Police estimated it to be around 50 people in the area.

The executive order reads as follows:

Importance of the Issue

On this day, May 31, 2020, I declare that a state of emergency exists in the Commonwealth of Virginia due to past and potential future civil unrest that poses a danger to public safety. The Commonwealth of Virginia has experienced significant events in the past 48 hours that have required intervention to restore order, ensure the safety of protestors and the public, protect property, and provide additional resources to support our local and state partners. In the past 24 hours alone, there have been numerous instances of unlawful activity resulting in injuries to peaceful protestors and first responders, significant property damage, and continued escalation of violent events. Specific incidents include unlawful assemblies declared in the City of Richmond, Prince William County, and Roanoke, extensive property damage in the City of Richmond and the City of Virginia Beach including the burning of two buildings, vehicle fires, debris and dumpster fires, vandalism, looting, and the damage to law enforcement vehicles.

The Commonwealth has a compelling interest to maintain peace and order in the face of escalating tension. The effects of this civil unrest constitute an emergency wherein human lives and public and private property are imperiled, as described in § 44-146.16 of the Code of Virginia (Code). Action is necessary to preserve life and property and to alleviate the conditions caused by this situation.

Therefore, by virtue of the authority vested in me by Article V of the Constitution of Virginia, by §§ 44-146.17 and 44-75.1 of the Code, and as Governor and Director of Emergency Management and Commander-in-Chief of the Commonwealth’s armed forces, I proclaim that a state of emergency exists in the Commonwealth of Virginia . Accordingly, I direct state and local governments to render appropriate assistance to prepare for and respond to this situation, to alleviate any conditions resulting from the situation, and to implement recovery and mitigation operations and activities so as to return impacted areas to pre-event conditions as much as 2 possible. Emergency services shall be conducted in accordance with § 44-146.13 et seq. of the Code.

In order to marshal all public resources and appropriate preparedness, response, and recovery measures, I order the following actions:

A. Implementation by state agencies of the Commonwealth of Virginia Emergency Operations Plan, as amended, along with other appropriate state plans.
B. Activation of the Virginia Emergency Operations Center and the Virginia Emergency Support Team, as directed by the State Coordinator of Emergency Management, to coordinate the provision of assistance to state, local, and tribal governments and to facilitate emergency services assignments to other agencies.
C. Authorization for the heads of executive branch agencies, on behalf of their regulatory boards as appropriate, and with the concurrence of their Cabinet Secretary, to waive any state requirement or regulation, and enter into contracts without regard to normal procedures or formalities, and without regard to application or permit fees or royalties. All waivers issued by agencies shall be posted on their websites.
D. Activation of the Virginia National Guard to State Active Duty.
E. Authorization of a maximum of $350,000 in state sum sufficient funds for state and local government mission assignments and state response and recovery operations authorized and coordinated through the Virginia Department of Emergency Management allowable by The Stafford Act, 42 U.S.C. § 5121 et seq. Included in this authorization is $250,000 for the Department of Military Affairs.

• Persons traveling to and from home, work, or places of worship;
• Hospital personnel;
• Members of the press;
• State and City of Richmond employees and volunteers;
• Military personnel including but not limited to national guard troops;
• Private emergency medical transport workers;
• Travel to and from public meetings City of Virginia Beach City Council and School Board;
• Persons seeking emergency services; and
• Other emergency workers

Nothing in this Order shall be construed to prohibit or restrict travel to a hospital in the event of a medical emergency, nor shall such travel be considered in violation of this Order.

Violation of this Order shall be a Class 1 misdemeanor pursuant to § 44-146.17 of the Code of Virginia. Effective Date of this Executive Order This Order shall be effective immediately and with the exception to the provisions instituting a curfew, shall remain in full force and effect until June 29, 2020, unless amended or rescinded by further executive order.

Given under my hand and under the Seal of the Commonwealth of Virginia this 1st day of June, 2020.