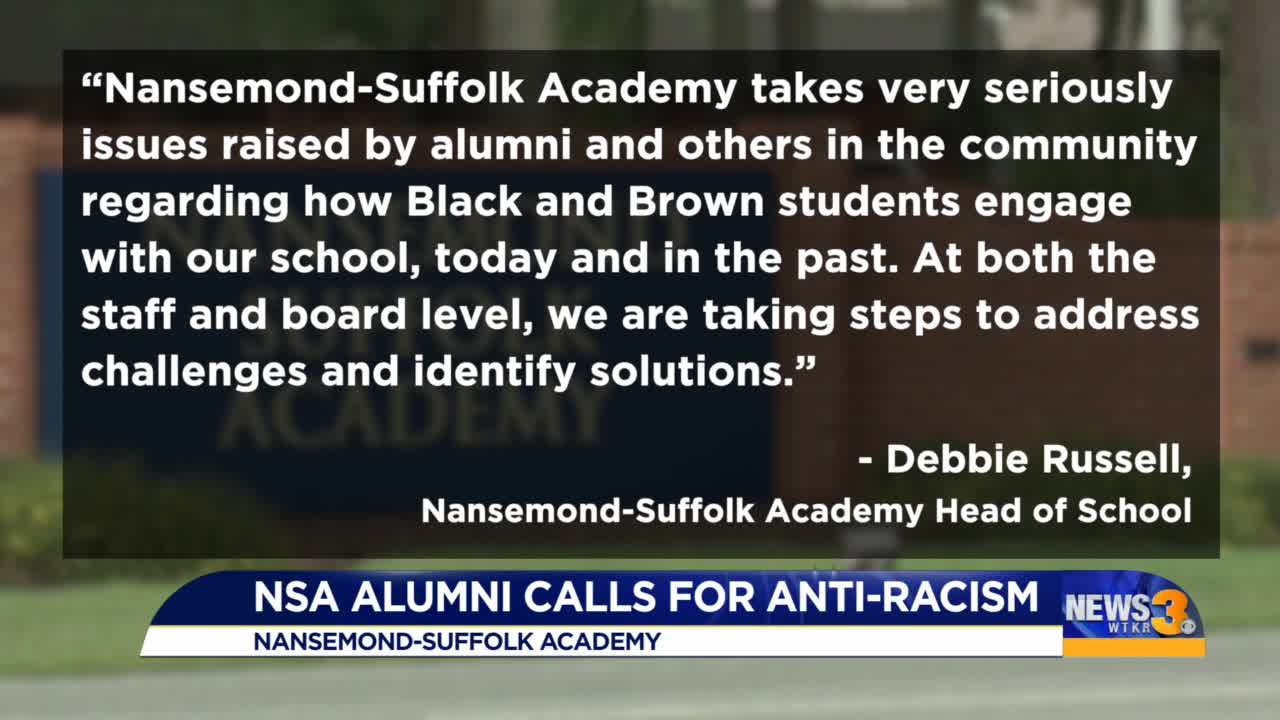 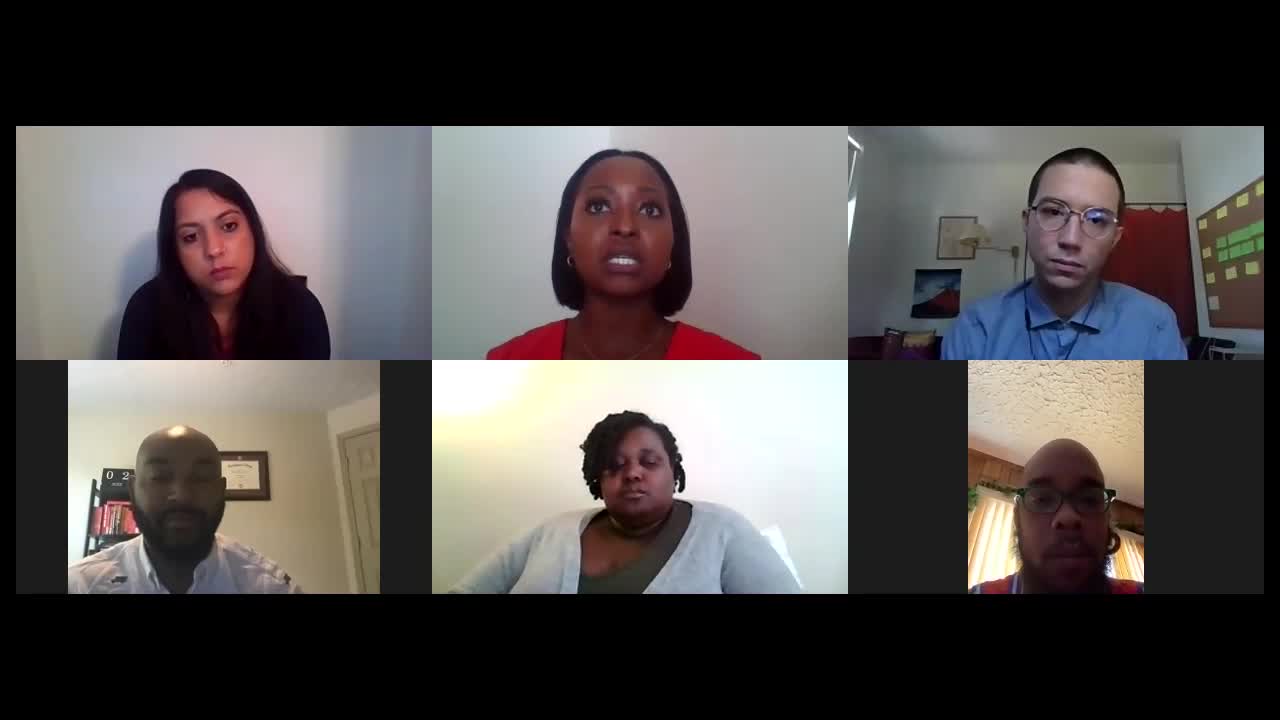 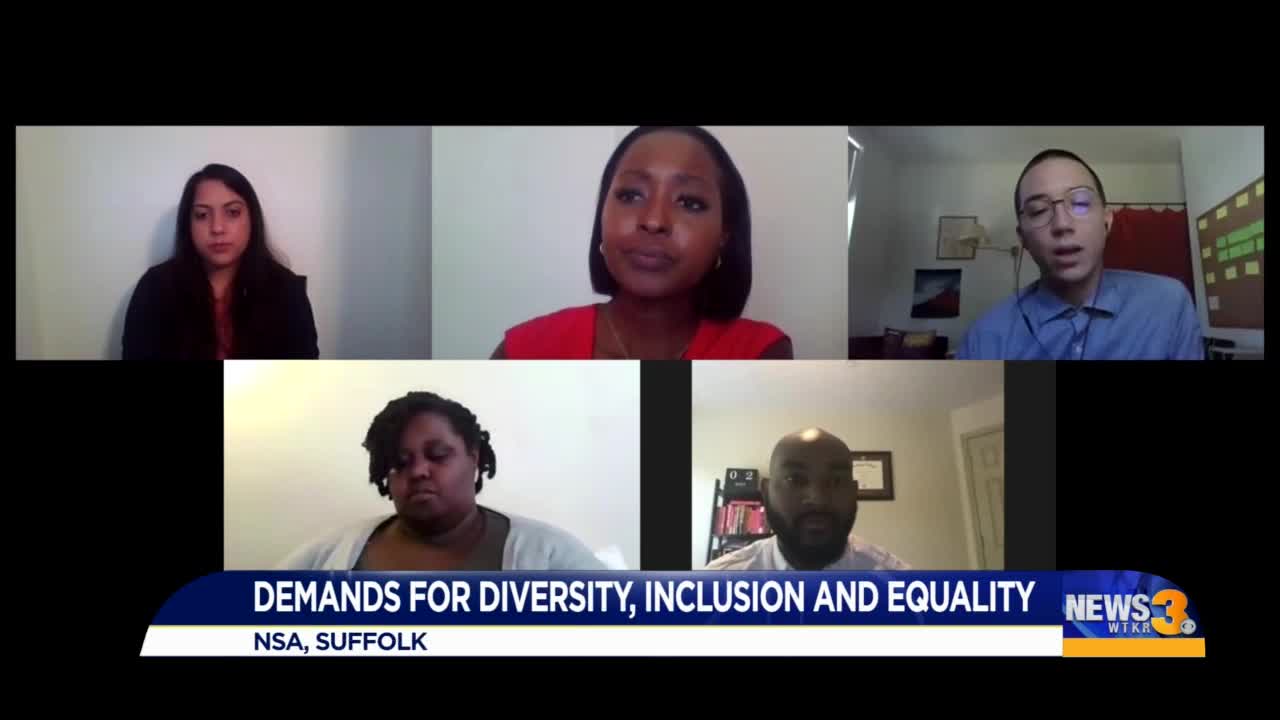 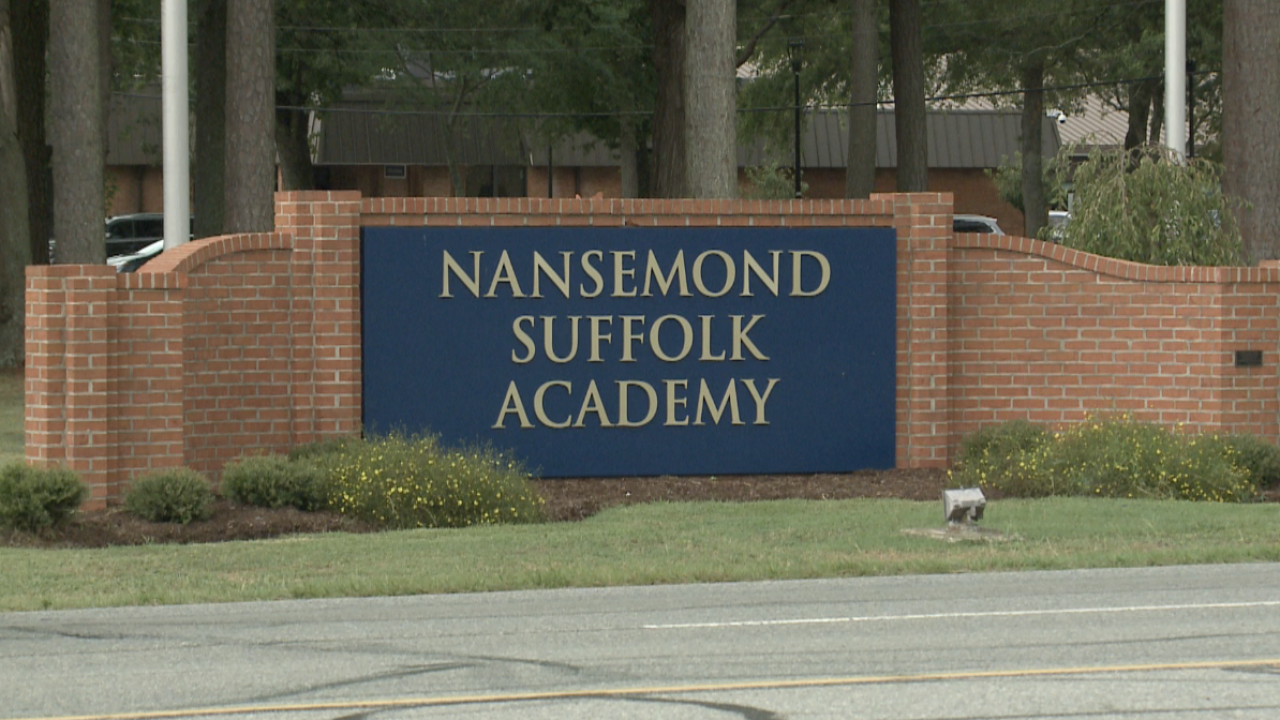 SUFFOLK, Va. - It’s another call to action from alumni.

“We just felt that we needed to push this conversation at the academy. That we needed to come together and write some type of letter and outline steps that we wanted to see as alums taken at the institution,” explained Sabrina Haque, NSA ’08.

In a very detailed letter including a ten-step action outline, some alumni from Nansemond-Suffolk Academy are demanding the school to include diversity, equity and inclusion. Alums say the letter has now received more than 700 signatures of support.

Some alumni, now in a group called Anti-Racist Saints, say Nansemond-Suffolk Academy was founded in 1966 as a segregationist academy after the Brown v. Board of Education’s decision called for schools to integrate.

“Letters from The Commissioner, The U.S. Commissioner on Civil Rights in 1968 naming Nansemond-Suffolk Academy directly to The Secretary of the Treasury saying, ‘That there is this segregationist academy called Nansemond-Suffolk Academy in Suffolk, Virginia which is using state money to make an all-white school. This is unconstitutional. What are we going to do about it?’” said Wade Cotton, NSA ’07.

A statement sent to News 3 from NSA’s Head of School says: “Nansemond-Suffolk Academy takes very seriously issues raised by alumni and others in the community regarding how Black and Brown students engage with our school, today and in the past. At both the staff and board level, we are taking steps to address challenges and identify solutions.”

When News 3 specifically asked the school if being a segregationist academy was a part of NSA’s founding history – we did not get a response.

Jasmine Rice, a former student at NSA, now has a daughter who is also attending. Jasmine says she did have negative experiences dealing with racism at the school.

“My first day of school. I was starting pre-school and I walked over to a student who was actually playing with a kitchen set and I asked her, ‘Can I play with you?’ She looked at me and she goes, ‘I don’t play with colored kids.’ So, that was my very first experience at NSA,” explained Rice, NSA ’07.

But, Rice also says she had some good experiences as well - which is why she decided to send her daughter to the same school.

“I know that NSA can provide a great education. So, that was one of my major reasons for sending my daughter there. I expected her to have to deal with some systemic racism, but for me – it was about making sure that she had an advantage in the real world,” said Rice.

On the Instagram account ‘Black@NSA’ you can find posts from former students, some who wish to remain anonymous, discussing painful memories of the past while attending NSA.

“I’ve seen students call my father the n-word a few times while he was teaching. But, he’s a strong man. He just brushed it off,” said Jevon Jenkins, NSA ’00.

“In high school, there was a white teacher who walked by my lunch table. I was sitting with other black students and (the teacher) said, ‘You’ve all fought all those years just to segregate yourselves.’ This teacher was never reprimanded. He was never fired. There was no accountability whatsoever. So, these kind of subtle microaggressions were quite normative. They were entrenched into the fabric and the culture of the school,” said Kenny Rice, NSA ’10.

Some former black faculty members have also expressed their frustrations with certain issues when it comes to race at the school.

“Some of the parents are uncomfortable. They never outright say it, but you can tell. They won’t ask you certain questions, they’ll ask someone else. They won’t talk to you about certain things when it comes to their child, they’ll talk to someone else. ‘Oh, I’d rather talk to this person.’ Although you are working with those children on a regular basis,” said former teaching assistant and alum Ashney Vann, NSA ’07.

A former teacher at NSA who did not want to go on camera shared with News 3’s Samantha German via Facebook: “I am very glad that alumni who have experienced racism are having their stories heard and that NSA is being made aware of these experiences, so they can do better in the future. That being said, it is unfortunate that so far, it seems like only one side has been “heard” on social media. I don't know whose fault it is, but in the last two months I have only read overwhelmingly negative comments about NSA. Like everyone and every institution, NSA is flawed and makes mistakes. On the other hand, there are a lot of great people there and they do a lot of good. I hope that is not overshadowed. I am confident they are already implementing many of the ARS' suggestions in the background, even if they are not publicly communicating with them. I hope the communication improves as soon as possible."

“I feel like we’re consistently talking about all of the horror stories. We’re forgetting about why this is really here in the first place, and that’s to help. Not only the people of color, but a lot of these white students struggled as well, because when they moved on from these schools – they had to relearn and restructure the way they’re thinking because they had no diversity,” explained Warren Carroll, NSA ’99.