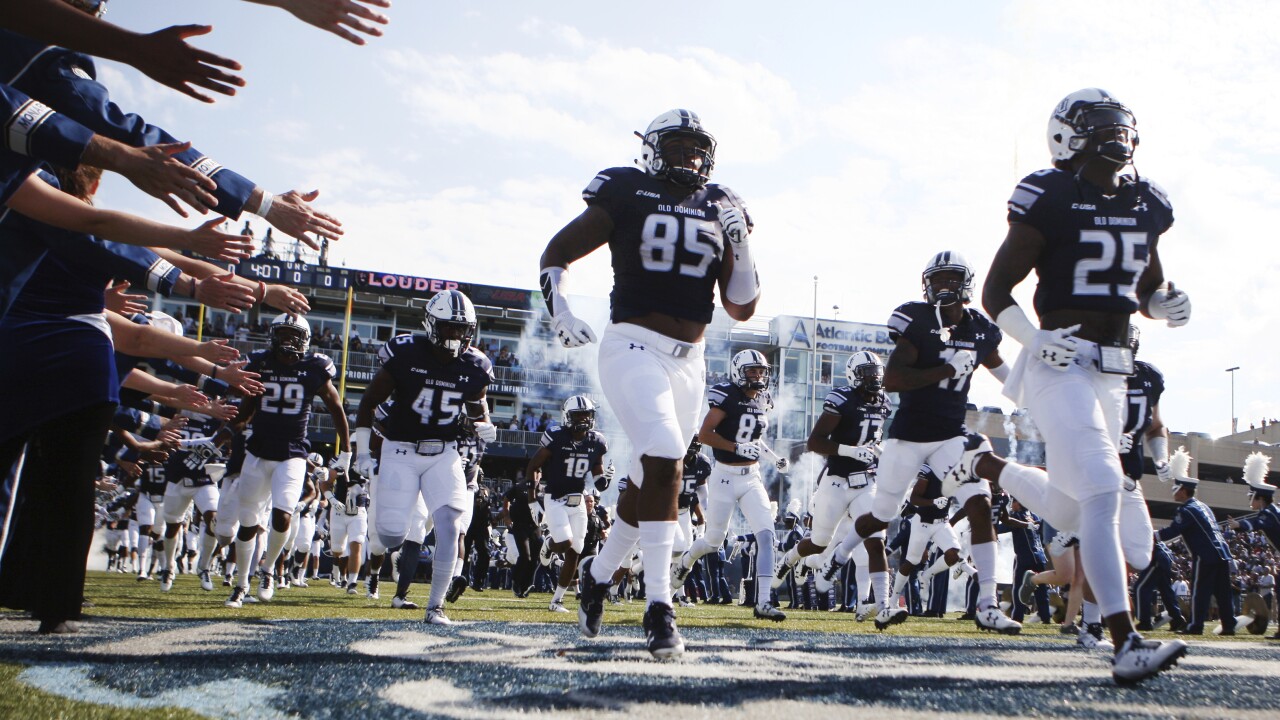 NORFOLK, Va. - A show of unity, one that garnered national attention, actually accomplished the opposite - it divided a head coach and his players.

In 2016, the Old Dominion University football team made national headlines when head coach Bobby Wilder instituted the 'Circle of Unity' within the Monarchs program. Following his team's 33-19 homecoming victory vs. UTSA September 24, 2016, Wilder penned a letter that was published on ODUSports.com. "We held hands together over our heads facing the crowd as a sign of unity," Wilder said about his team's show of unity prior to the game. "We wanted to show the fans, the country, and the world that we are saddened by the hostility we see every day in our world."

Wilder noted his team would form a 'Circle of Unity' prior to its future games and ask opponents to join the Monarchs. He also shared plans to form a group called Children 4 Humanity #WALT. WALT is an acronym for watch, accept, listen, tolerate. "Our goal is to show the world that we are unified as human beings that should live together in peace and harmony," Wilder's letter, a document that did not include a reference to any specific race or injustice, read.

However, here in 2020, as racial tensions have risen in America due to the killings of George Floyd, Ahmaud Arbery and Breonna Taylor, all black, we're learning Wilder's headline-making show of unity may have actually quelled a Black Lives Matter message within his program.

"He hijacked our movement," an ODU player on the 2016 team, who wished to remain anonymous, told News 3 Sports Director Adam Winkler Tuesday. "He got national attention for something much more politically correct than Black Lives Matter," the player, who does not feel Wilder is a racist or had racist motives, added.

"For a moment, I thought he [Wilder] really cared about us and what we [black players] were going through," Brandon Addison, a starting cornerback on ODU's 2016 team told Winkler via phone Tuesday night. "But, as time moved on, it seemed like he realized the personal gain he could receive from the unity movement he personally altered. Once that happened, he really started to roll it out," Addison, who recently launched a local group focused on unifying efforts to promote Black Lives Matter, added.

According to multiple players, more than 30 members of ODU's team had planned to wear t-shirts with the words "BLACK LIVES MATTER" emblazoned across the chest during the team's organized warm-ups prior to the September 24, 2016 game vs. UTSA. The 30+ players, according to a source, included multiple races and numerous white players. This movement was in response to the killing of Keith Lamont Scott by police in Charlotte.

Several players wore the shirts on the field for individual stretching and drills more than an hour prior to kickoff. However, the plan was to not only wear the t-shirts during organized warm-ups, but for players to wear the shirts under their game jerseys and show them to the crowd after running out the tunnel immediately prior to the game. One source said multiple black players also wanted to raise their fists while taking the field. But, according to the source, 'it would be all football' after that.

According to three different sources, head coach Bobby Wilder, who was not aware the t-shirts existed until a few hours before kickoff, instructed the players they were not to wear the "BLACK LIVES MATTER" t-shirts.

Travis Fulgham, a starting wide receiver on ODU's 2016 team who is currently a member of the Detroit Lions, conveyed a similar message in a tweet Tuesday. "It's crazy to me that our 2016 team tried to stand up for something and we got shut down," Fulgham wrote in his tweet.

Multiple sources confirmed to News 3 it was Wilder who told the players they were not allowed to wear the shirts again. Numerous players say that message was delivered in a team meeting Sunday September 25th - after Wilder's letter was published at ODUSports.com.

"I don't have any beef with ODU or anyone there," Fulgham, who was selected by the Detroit Lions in the sixth round of the 2019 NFL Draft, added. "It's just sad how the world works. Why does fighting for black rights make white people angry?"

Wilder, who resigned after 11 years as ODU head football coach in December, published a tweet Friday referencing his team's circle of unity from 2016. "This should NEVER happen again in OUR America," Wilder wrote in a tweet accompanying a picture of ex-Minneapolis Police Department officer Derek Chauvin with his knee of the neck of the late George Floyd. "I wish USA would act like our @ODUFootball 2016 team. We addressed this issue with the “circle of Unity.” We taught thousands to stand together. WE ARE ONE! #Circleofunity #usa

Wilder replied to Strong's tweet by saying, "Never knew you felt this way about my leadership as your HC in 2016 @kstrong_4. Go back and listen to the interview on ESPN. I talked about BLM,Police,and DWB [Driving While Black]. Could have been fired for what I said and did. Needed extract GD [game day] security due to death threats. And I would do it again!"

Wilder, who spoke to News 3's Adam Winkler via phone Tuesday evening, did not deny the players' accounts of the 2016 events.

"That 2016 team was not only the best team I ever coached, but they were the strongest and most-resilient group of men I've ever been around," Wilder said. "We had guys from many different backgrounds, and it was a privilege to be involved with them. I hope that experience will help them make our world a better place, because right now - we aren't good enough as a country. What is going on right now is a tragedy. We need to improve. We tried to find a way, in 2016, to make a difference. I still feel that group did some special things with the Circle of Unity and Children 4 Humanity."

"ODU remains proud that goodwill was generated by the members of the football program through the Circle of Unity and the Children 4 Humanity program in 2016," the ODU athletics department said in a statement provided to News 3 in response to a question regarding Fulgham's tweet specifically. "It’s important that our student-athletes, alumni and staff continue to have an active voice in enhancing understanding within our community. In that light, we hear Travis Fulgham’s voice about the actions taken in 2016. His comments are particularly meaningful because Travis is someone that had been dedicated to enhancing the community. We will continue to talk with and listen to our student-athletes, coaches and alumni so that ODU can be part of the solution as we move forward."