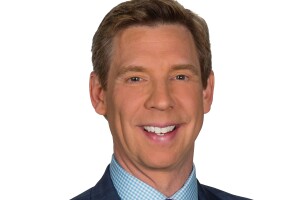 Patrick’s interest in weather began on a camping trip to Lake Gaston when he was just 7-years-old. It was June 1972 and his entire family was spending the week in a pop-up camper.

A terrible rainstorm came and made the trip a muddy mess. But it wasn’t just any rainstorm. The remnants of Hurricane Agnes dumped flooding rains on parts of Virginia, Pennsylvania and New York. Agnes is still considered the worst natural disaster ever to hit some communities. After that, Patrick became fascinated by hurricanes, thunderstorms and, like every kid, snow storms. He still considers the Blizzard of 1980 in Hampton Roads his favorite weather memory.

Patrick then earned a master’s degree in Communications – Radio/TV from Murray State University in Kentucky. He received his meteorology training through Mississippi State University and holds the seal of approval from the American Meteorological Society.

Patrick has been honored with two southern regional Emmy Awards, along with numerous awards from the Associated Press.

Patrick’s parents retired from the military and live on the Peninsula. He shares his Norfolk home with his husband and three dogs, Blue, Klein and Deanie. You can see Patrick’s First Warning Forecast every weekday on News 3.